This morning the RTE soccer twitter account tweeted news of reports that Shamrock Rovers had sacked their under pressure manager Trevor Croly. 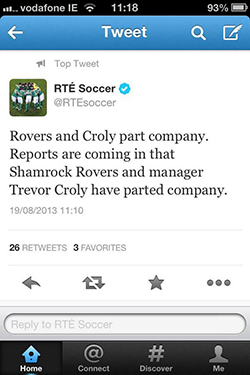 Within minutes Shamrock Rovers had denied the reports forcing RTE into an apology only 25 minutes after the original tweet was posted.

Trevor Croly story untrue. We are investigating who gained access to the @rtesoccer account and have updated all security settings.

It's not the first time RTE's twitter account has posted rumours of a Shamrock Rovers manager. They were a bit premature with news of Stephen Kenny's sacking last year too.

Croly's high spending Shamrock Rovers team lie in 5th place in the league and are closer in points to the bottom side Bray than they are to leaders St Pats. They've lost their last 3 games.  We'll have our weekly Airtricity League wrap up later.

Football
1 day ago
By Sean Meehan
Quiz: Can You Name All League of Ireland Top Goalscorers Since 2000?
1

Football
1 day ago
By Sean Meehan
Quiz: Can You Name All League of Ireland Top Goalscorers Since 2000?
Football
4 days ago
By Donny Mahoney
Jordan Flores Wonderstrike Nominated For Puskas Award
Football
3 weeks ago
By Gary Connaughton
Late Drama As Goalkeeping Errors Cost Dundalk Dearly Against Rapid Vienna
Popular on Balls
Rugby
23 hours ago
By Donny Mahoney
Tadhg Leader Is Trying To Make It As An NFL Kicker
5