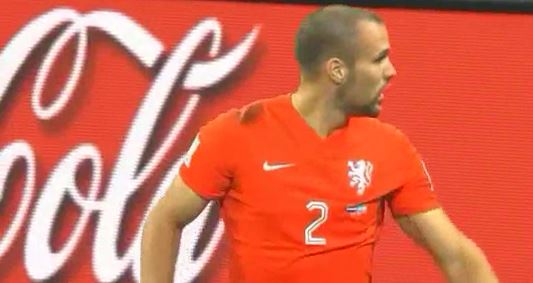 Since last night, there has been much confusion and discussion over whether Ron Vlaar's penalty would have stood had the ball spun back over the line (and not probably hit his shoulder).

Many have made the argument that had the ball spun over the line it would not have stood anyway because the ball, as articulated by Marie-Claire Fitzpatrick, 'has to go in from the initial motion of the strike, ie a forward motion.'

In the 1986 World Cup, during the France-Brazil penalty shoot-out, a penalty from France's Bruno Bellone was awarded when hit the post, came out, banged off the goalkeeper and nestled in the corner. Brazilian captain Zico complained and was booked. The following year the law was clarified in support of the referee's decision.

There are directives around this. The ball is saved, spins out, up in the air, spins back. It's one continuous motion almost, rolls along the ground and I would say had that gone in, the goal would have been allowed.

Now, the question here is whether that hit the player and obviously that would rule it out completely.

A kick is successful if, having been touched once by the kicker, the ball crosses the goal line between the goal posts and under the crossbar, without touching any player, official, or outside agent other than the defending goalkeeper.

The ball may touch the goalkeeper, goal posts, or crossbar any number of times before going into the goal as long as the referee believes the ball's motion is the result of the initial kick.