Same Result, But A Vastly Different Story For Ireland After Denmark Draw

When Ireland and Denmark were drawn in the same qualifying group for Euro 2020, there was a sense of inevitability about it all. These are two teams that seem unable to avoid one another, and that is something neither side is particularly pleased about.

They say familiarity breeds contempt, and that's certainly the case with Ireland and Denmark. The Danes in particular have grown weary over the past 18 months, as suggested by their comments after last year's UEFA Nations League meetings between the sides.

You could argue that Åge Hareide's side are hardly the most exciting team in world football themselves, but they certainly had a point when it came to their claims of Ireland's lack of ambition. The four previous meetings between the sides could generously described as drab affairs, with the 5-1 humiliation at the Aviva Stadium the only game that didn't finish scoreless.

Each meeting was draining for all involved, be it the supporters or the teams themselves.

In the buildup to last night's game, the hosts made it clear they were expecting more of the same. "You can change the manager, but cannot change the players" was the claim of defender Mathias Jorgensen.

He may have been factually correct, but this is a different Ireland team nonetheless.

While the result may have been the same as in three of the four previous meetings, Ireland's performance contrasted wildly. The personnel did not vary all that much from the Martin O'Neill era, but there was certainly a change in the dynamic of the team.

McCarthy's team selection was lamented in some quarters before kick-off, claiming it showed a lack of imagination that would ultimately lead to the same old story against the Danes.

In truth the Ireland boss had little other choice. He is only in the job for the next 12 months or so, and has to attempt to establish some form of continuity over a condensed qualification campaign. 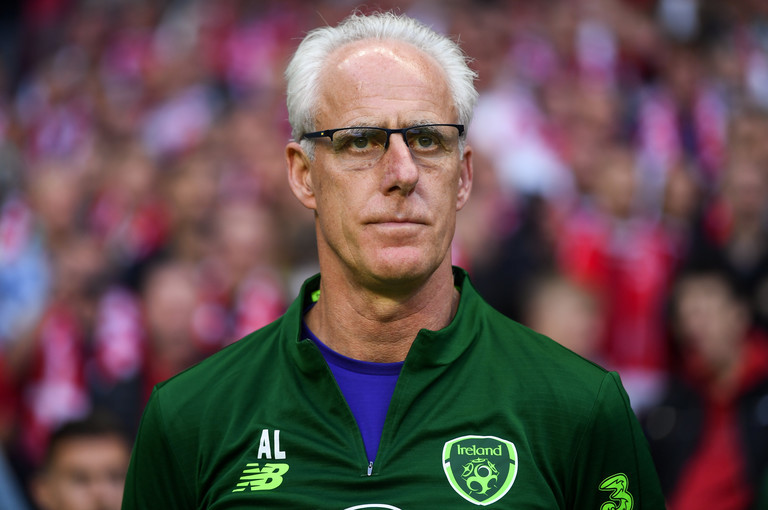 The two qualifiers in March showed early signs of McCarthy's impact, with Ireland playing a far more attractive style of play in the win over Georgia. With the lack of friendly matches before the campaign, the Gibraltar and Georgia fixtures were somewhat of a fine-tuning exercise.

The training camp in Portugal last month was his first, and possibly only, chance to really put his stamp on the team. The results were there to be seen in Copenhagen.

Having become so used to seeing Irish defenders knocking it long at the first opportunity, it was strange to see Shane Duffy and Richard Keogh play probing passes into the midfield. They even carried the ball out themselves on a few occasions.

Keogh did that to wonderful effect during the play-offs with Derby, and it was encouraging to see McCarthy give his centre backs a similarly long leash.

It seems bizarre to say this about a football team playing at the top level, but Ireland played without a plan under Martin O'Neill. They would deep and invite their opponents onto them, hoping to grab something on an unlikely counterattack or from a set-piece.

Ireland's approach last night was a stark contrast. They pressed Denmark high up the pitch, not giving them time on the ball to pick out easy passes. 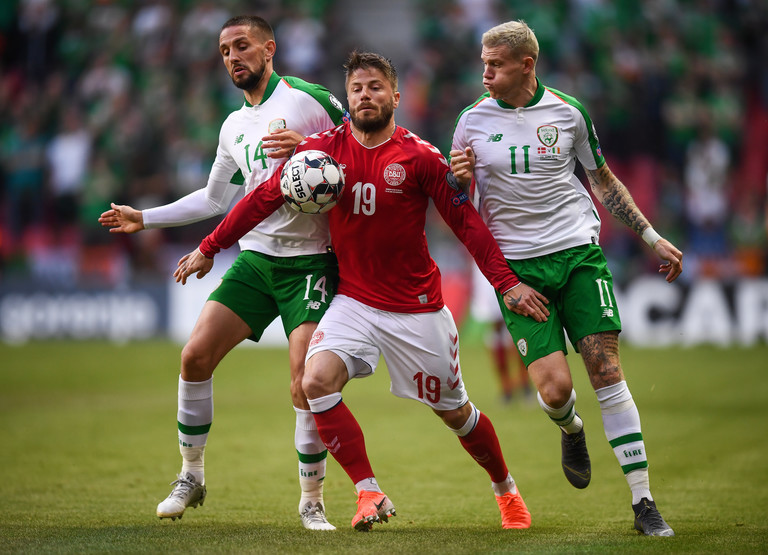 Glenn Whelan has been criticised for his lack of mobility during his Ireland career, and rightly so at times. But it was him who set the tone in the opening 10 minutes with a lung-busting press in the middle third, hustling and harrying the Danish midfielders. At 35-years old, Whelan exerted himself in a manner we had never really seen in the 10 previous years.

Instead of reacting to Denmark's probing in attack, we asked questions of them further out the pitch. We were proactive rather than reactive against strong opposition for what felt like the first time in an eternity.

We continued to pass the ball out from the back throughout the 90 minutes. When they did go long on occasions, they were measured passes as opposed to hopeful hoofing of the ball.

All of this was done without losing the toughness and discipline that pissed off the Danes in previous meetings.

In short, there was a belief and self-confidence that we just did not see under the previous regime.

Ireland took the derogatory comments directed towards them by the Danes personally, as James McClean made clear after last night's game:

Professionals criticising you and not in a nice way either. We wanted to go out and prove a point. Fair enough, they beat us 5-1, but we played them five times recently and drew four so they're not much better than us themselves, are they?

Seamus Coleman expressed a similar sentiment. This is driven by the rediscovered confidence provided by McCarthy.

They had the belief to conjure an equaliser when it looked like the game would escape them. After playing so well in the first 75 minutes, it would have been expected Hojbjerg's goal would act as a killer blow.

Instead, Ireland continued to play their game. Not Denmark's.

They were rewarded for it, with Shane Duffy's towering header securing a well-deserved point. It was a draw, as had been the case in three of our four previous meetings.

But not all draws are created equal. Some hold far more significance than others, and this performance will offer endless encouragement in a wider context. Top of the group and in a fantastic position after three games, their confidence will only grow stronger.

Ireland have gotten their belief back. Let's see how far it can take them...

SEE ALSO: What Ireland Need To Do To Qualify For Euro 2020 After Denmark Draw

Football
2 weeks ago
By Gary Connaughton
'It Didn't Work, The Shape Of The Team Didn't Work' - Doherty & Coleman Repeat Unlikely
5

Football
1 month ago
By Gary Connaughton
McCarthy Stresses Form, But Will He Practice What He Preaches In Irish Midfield?
Previous Next