When Samuel Eto'o decided to leave Goodison Park after just half a season to join Seria A side Sampdoria, he posted quite a lovely message on his social media accounts. Eto'o wrote of the "warm, passionate, affectionate and supportive fans" in Liverpool and everyone went away happy forgetting for a moment that Eto'o only scored four goals in his 20 games for Everton.

Eto'o has since left Sampdoria just five months after signing a two and a half year deal, and moves to Turkish club Antalyaspor.

The gentleman that Eto'o is, he decided to give his thanks to Sampdoria fans in a heartfelt message:

Dear Blucerchiati , I've been blessed to spend these past few months with you. To my pleasure, I have discovered...

Those are some very kind words.

Although, haven't I seen the phrase "warm, passionate, affectionate and supportive fans", before? Here's the message to Everton supporters:

Dear Toffees, I've been blessed to spend these past few months with you. To my pleasure, I have discovered here a...

We've all done something like this before, writing a nice message based on something we've used before. If it worked once, why change it right? Here's the two messages side by side: 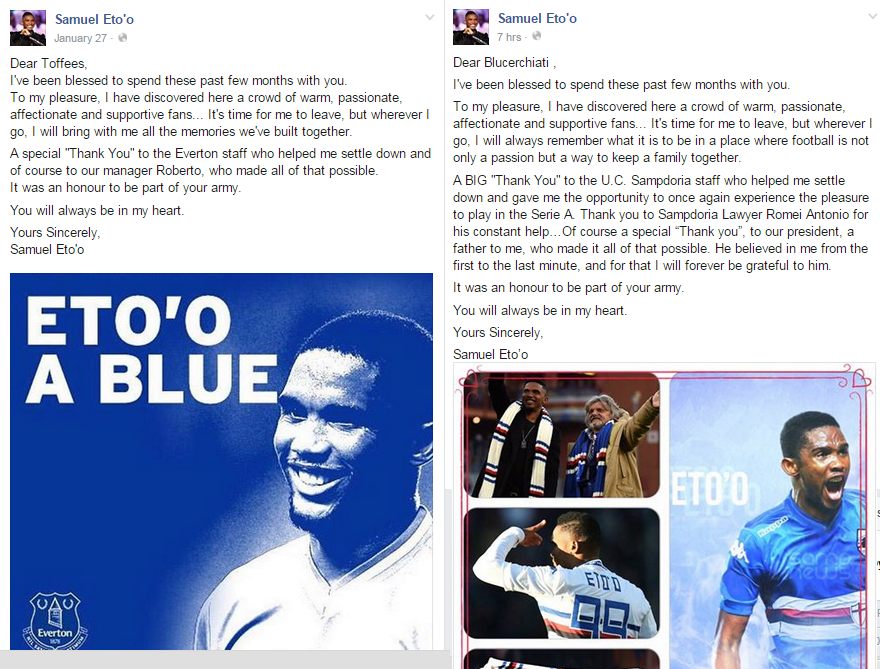 It's just unfortunate for the Cameroonian that he was caught out thanks to being in the public eye.