Luxembourg snatched a 1-0 win at the Aviva Stadium after a late long-range strike from Gerson Rodrgiues. The defeat ramps the pressure up on manager Stephen Kenny, who is now winless in 10 games in charge of the Irish team.

RTÉ co-commentator Stephen Kelly was tasked with choosing his "player of the match" and plumped for captain Séamus Coleman. The Everton right-back was frank in his post-match interview and said that the team had to shoulder the blame for the shocking loss.

The player of the match accolade has never been more meaningless, but Ireland captain Seamus Coleman is as honest as always.

Yeah, it’s a shocking result. It’s an embarrassing result. Let’s not hide behind anyone for that one, that’s on us as players. We should be embarrassed.

As players, we need to have a good, hard look at ourselves. You need people demanding the ball out there and I don’t think we done that enough.

Listen, Tony, I’ve got to come out here and do an interview, but there’s no words for that there, that’s embarrassing. On behalf of everyone at home watching…as players, we take that on the chin. It’s nowhere near what we wanted.

RTÉ's Tony O'Donoghue pushed Coleman to comment on the mood in the dressing room, and Coleman painted a grim picture of a dejected side.

There’s anger, embarrassment, a bit of everything Tony…you know, it’s not good enough.

There’s no words I can say to you to make the people at home feel any better or anything like that, so…you know, I think as players we should be disappointed."

Much has been made of the youth in Ireland's team, with 20-year-old Jason Knight and 19-year-old Gavin Bazunu trusted from the outset in Saturday's game. Coleman said in the interview that the onus was on the more senior players in the camp to front up to the criticism and do better in future outings.

We’ve got to be resilient in this games and we’ve got to take what’s coming in this game – we’ve just got to keep going and make sure the younger lads aren’t tainted by that and the senior players take it on the chin and take the deserved criticism and keep going forward.

It’s a tough start to the World Cup campaign, but…you know, we’ve got to show some pride in the shirt and I don’t think we did that tonight.

It was a shocking night for the Irish team and there will be no arguments from supporters with Coleman's comments.

Tuesday's friendly against Qatar is a chance for Ireland to get their first win under Stephen Kenny, but the World Cup seems a distant longshot at this stage.

SEE ALSO: Ireland Player Ratings After Embarrassing Loss At The Hands Of Luxembourg 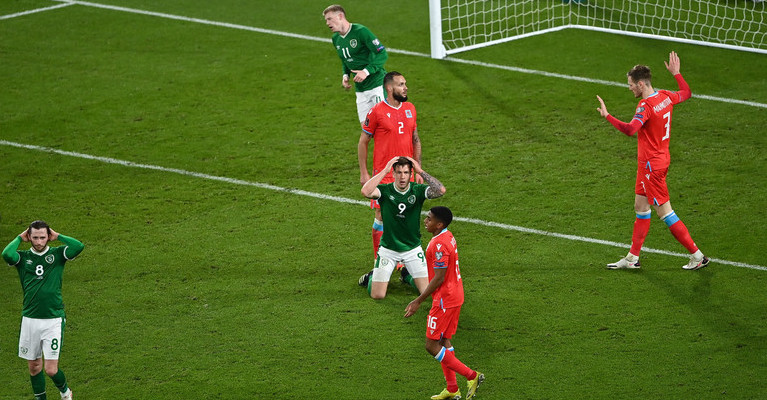