Following the recent event in Dublin’s 3Arena involving some of the biggest names in comedy, net proceeds of €465,000 have been paid to the Seán Cox Rehabilitation Trust by event organiser Aiken Promotions.

Over 8,000 fans, including Seán Cox and his family, attended the sell-out gig on January 10th to watch an all-star line-up.

One of the highlights of an amazing night was the finale when the entire audience, led by the eight performers, belted out 'You’ll Never Walk Alone'. 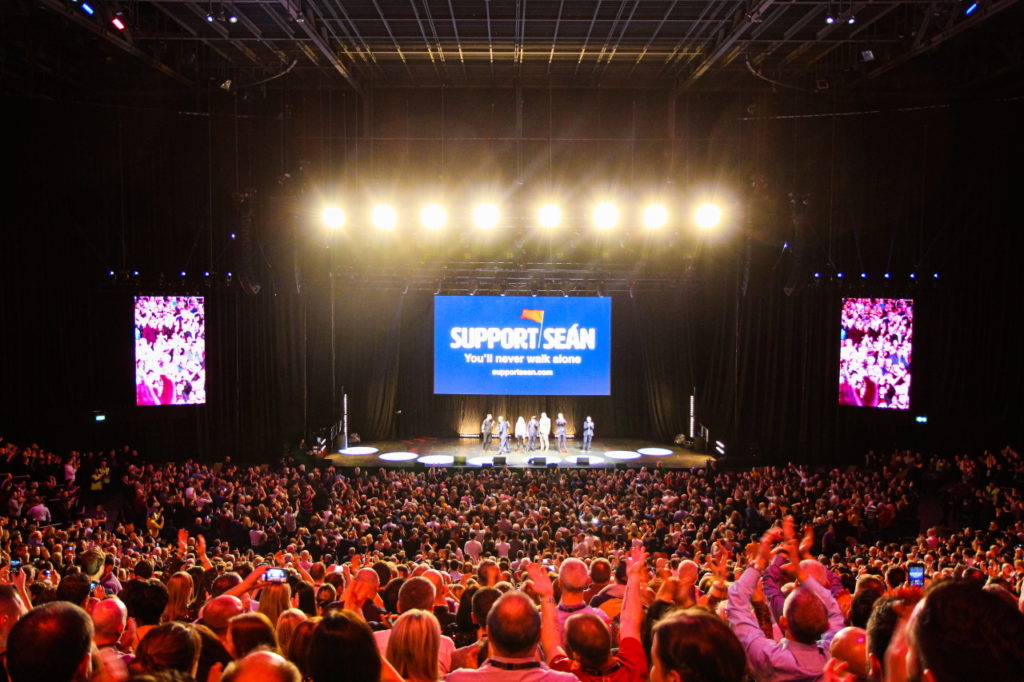 "That night in the 3Arena was a special one for us all, especially Seán," said his wife Martina.

"He is a huge fan of John Bishop and of comedy generally. Seán knew that his comedy heroes along with the 8,000 people in the arena were all there to support him. I haven’t seen Seán laugh like that since the attack, it has done him such good.

"On behalf of Seán and I, our children and Seán’s brothers and sisters, we want to offer our most sincere thanks to John Bishop, the comedians who performed on the night, Aiken Promotions, the 3Arena and the many other people and companies who were so generous with their time and services.

"A phenomenal amount of money was raised through the generosity of so many. We don’t take it for granted and it will be used very carefully to make sure Seán has the medical care and support he needs."

John Bishop, one of the event's organisers, said:

What happened to Seán could have happened to any of us and I have been hugely impressed by the strength and dignity of the Cox family. I just wanted to do something to help and to allow people an opportunity for a good night out, at the same time showing them how much support there is for Seán.

The line-up was amazing and everyone was keen to be involved from the moment I called them. The audience in Dublin is always special but that night it was another level. The quality of the show mixed with the genuine goodwill in the room for Seán, Martina and the family made it a night that will live in the memory for a long time.

Funds raised for the trust have now hit €2.75 million. A decision has been taken by the Cox family, in conjunction with the Seán Cox Rehabilitation Trust, to wind-down the public fundraising that has taken place over the past 18 months.

"We will forever be grateful for how so many people helped make an awful situation so much better than it might otherwise have been for Seán and our family," said Martina Cox.

However, she feels that there are many other causes and charities across Ireland and the UK requiring public support at this time and adds that “the people of Ireland, Liverpool, Dunboyne and so many other places took Seán into their hearts and gave so generously. I pray that other families going through very difficult times can experience the same goodwill and love as we have”.

An independent assessment of the costs of Seán’s long-term care, ongoing medical needs and progressive rehabilitative programme estimates that further monies will be required over his lifetime in excess of what has been raised to date.

The Cox family would like to acknowledge the support of both Liverpool Football Club and AS Roma in supporting Seán’s plight to date and the respective commitment of both clubs to help Seán into the future.

Football
15 hours ago
By Gary Connaughton
Watch: Son And Lloris Have To Be Separated During Halftime Confrontation
3