Colorado Rapids midfielder Shane O'Neill recently took some time out to talk to our very own Frankie Lally about life in the MLS, summers in Cork and how the 19-year-old hopes to meet Robbie Keane. 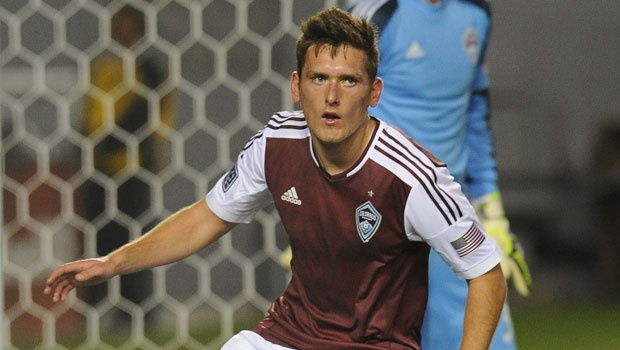 Balls - So Shane, you were born in Cork?

Shane O'Neill - Yeah that's right. I didn’t live there for long but we kept our house back there and I went back every summer. The only summer I didn’t go back was when I signed with the Rapids over here.

Balls - Did you ever take in a Cork City game while you were spending your summers there?

O'Neill - Yeah, I actually trained with the youth teams at Cork City and Cobh Ramblers a few times to stay fit during the summer. I have a lot of family in Cork.

Balls -You've played with the U.S Under-20s but has the FAI ever contacted you and would you consider playing for Ireland?

O'Neill - I'm eligible for both the U.S and Ireland. I’ve talked to the Ireland Under-21 manager a few times and I was asked to go over for a few days of training before the game against Holland, but I was already in camp with the U.S team so it didn’t work out.

I’m just taking it in stride, I’ll see what opportunities come but I’m not going to close any doors, I’m up for anything. I’m not too worried about it right now. I’m just focused on paying with the U.S Under-20s and I’ll see what happens.

Balls - Your parents are from Midleton in Cork and your Dad, Colm, won two All-Irelands with the county back in 1989 and 1990. Would they like to see you in a green jersey?

O'Neill - I don’t think my parents would mind it! It’s a tough decision because my family is from there but I grew up playing here.

Balls - Do you feel more Irish or more American though?

O'Neill - [Laughs] My parents both come from Ireland, they lived there for 30 years, so it's a very Irish culture at home. Around my friends though I feel American. It's a bit of both I suppose.

Balls - How is the season going so far with the Rapids?

O'Neill - It’s going good. I spent a lot time at the start of the season with the American Under-20s down in Mexico for qualifiers, so it was tough to break in for the first few games. We're doing well now and hopefully we can keep it going.

Balls - You had an offer to go to the University of Virginia before signing with the Rapids. What happened there?

O'Neill - Usually players will go to college first but there was niche in the midfield here at Colorado last season and they offered me a contract.

I thought it was the best opportunity for me so I took it and it worked out really well. I didn't want to go to college for three or four years and then turn pro at 22, so I took the opportunity when I got the chance.

Balls - Your brother Darragh is a punter at University of Colorado. Were there any other sports that tempted you?

O'Neill - Not really. I've always loved soccer. I did play basketball at school but I was never really interested in it like I was with soccer.

Balls - There are plenty of Irish players either playing in the MLS at the moment, or at least talking about it. Would you recommend a move there?

O'Neill - The standard over here is getting better and it's only going to continue to improve as the league continues to grow. I would definitely recommend a move here. The facilities are great and the fanbases are getting bigger. I think it's going to be a very good league in a few years.

Balls - Have you spoken to any of the Irish players over in the MLS?

O'Neill - A few. I was hoping to meet Robbie Keane when we played LA Galaxy at the start of the season but he was with the Ireland team for the Sweden game. Hopefully I'll meet him soon!

Balls - Cheers for taking the time to talk to us Shane and the best of luck to you and the Rapids this season.

Football
7 months ago
By Sean Meehan
Irish Players To Watch Out For Ahead Of The 2021 MLS Season
Football
9 months ago
By John Dodge
25 Years Of Ireland's Impact On Major League Soccer
Football
10 months ago
By Gary Connaughton
Report: Liverpool Eyeing January Move For MLS Defender
Previous Next

Football
7 months ago
By Sean Meehan
Irish Players To Watch Out For Ahead Of The 2021 MLS Season
Football
9 months ago
By John Dodge
25 Years Of Ireland's Impact On Major League Soccer
Football
10 months ago
By Gary Connaughton
Report: Liverpool Eyeing January Move For MLS Defender
Popular on Balls
Football
15 hours ago
By Jonathan Browne
Reports: Solskjaer's Coaching Staff To Stay On At Old Trafford As Rangnick Appointment Confirmed
Snooker
17 hours ago
By PJ Browne
Selby Crashes Out Of UK Championship On Dramatic Respotted Black
Snooker
1 day ago
By PJ Browne
Shaun Murphy Apologises Over Timing Of 'Amateur' Comments
33