Manchester United were very poor in their loss to Aston Villa this afternoon, but the most surprising aspect of the game was the way in which they failed to win a point late on.

Bruno Fernandes had the opportunity to level the game late on from the penalty spot, only to balloon the ball over the bar. Ole Gunnar Solskjaer wasn't happy with the way the Aston Villa players conducted themselves before and after the spot kick, although Tim Sherwood had a bit of a mad theory as to why the Portuguese midfielder may have missed it.

Of course, Cristiano Ronaldo was also on the pitch at the time. However, Solskjaer opted to stick with his previous penalty taker despite the forward's arrival at the club.

Speaking on Sky Sports after the game, Tim Sherwood said that Ronaldo's presence on the pitch was the reason Fernandes missed the spot kick.

You don’t miss that Jeff, you never see [Fernandes] blast it over the crossbar.

He normally waits for the goalkeeper to go down and rolls it into the other corner.

It’s the pressure, the main man [Ronaldo] is here. It’s distorted his thinking.

He’s got one chance, one chance only and we’ve seen it gone there.

Fernandes has changed up his penalty technique in recent times, not always sticking with the stuttered run up that had proven so successful since his arrival at Old Trafford.

His record from the spot is still excellent, although it remains to be seen if this miss could result in Ronaldo stepping up on the next occasion. It certainly wouldn't be a surprised were he to do so, although Fernandes would have a right to be a bit miffed were it to be the case.

SEE ALSO: Solskjaer Was Not Happy With Aston Villa Behaviour For Fernandes Penalty 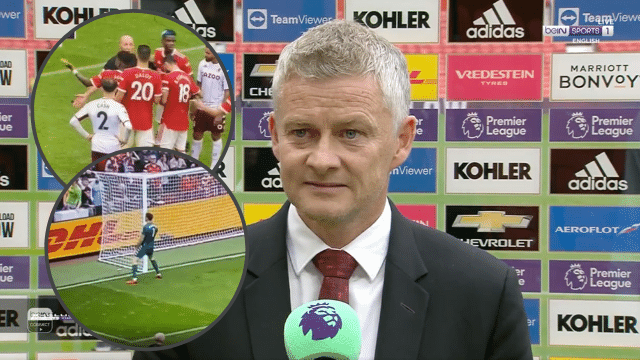 Football
2 weeks ago
By Sean Meehan
The 10 Best January Transfer Window Signings In Premier League History
Football
4 weeks ago
By Jonathan Byrne
Gary Neville Points Blame At 'Whinging' Duo After Man United Draw
Football
2 months ago
By Eoin Harrington
Roy Keane Thinks Bruno Fernandes Needs To Show More Character On The Pitch
Popular on Balls
GAA
2 days ago
By PJ Browne
Insane Drama As Late TJ Reid Goal Sends Ballyhale Into All-Ireland Final
Rugby
1 day ago
By Colman Stanley
Yesterday Was Not The First Time Wayne Barnes Sent A Player Off For Getting Lippy
Rugby
22 hours ago
By Colman Stanley
Champions Cup Predictions And Permutations For The Irish Provinces
The Rewind
2 days ago
By Jonathan Byrne
The Definitive Ranking: Deli Items Ranked From Best To Worst