Euro 2004 was the best European Championships because it starred the short-sleeved Portuguese keeper Ricardo and happened when I was 24 and living in Lahinch.

Other than Berlin, I cannot think of anywhere on earth better to be stranded during the langourous four weeks of a major international football competition than Lahinch.  There is football, sea air, daytime activities away from football and drinking, randomers, comrades, an unexpected variety of pubs, nearby towns like Ennistymon with their own pubs that show football and, most importantly, a very healthy distance from the relentless churn of commerce. A football tournament can only be truly experienced like a Buddhist monastery, with total immersion.

That summer, I was just off the plane from New Jersey. I got a job at the Lahinch hostel and rented a room up Station Road. It was a memorable summer but I will stick to the football. I remember watching almost every game, but what I remember most clearly is Ricardo during those penalties against England, doing his short-sleeved voodoo.

It was a tournament that would be marked by two teenagers who would dominate English, if not world football, for the next decade. Ronaldo at 18 was awkward, needy and gifted. Rooney was a thunderclap. I believe his shots-to-goal ratio was 158% for the tournament. With hindsight, you can make the argument England could have won the tournament if Rooney didn't jar his metatarsal against Portugal. Instead Darius Vassell decided England's fate.

With time, Ricardo emerges as the true hero of the tournament. He saved Vassell's penalty without gloves. He kept them off for the winner. There was something heartening about this final flowering for Portugal's golden generation under Big Phil. If there was something fatalistic and desperate about Portugal's national need for some trophy to mark the significance of this group - Figo, Rui Costa etc - it only proves the hollowness of success.

Euro 2004 was my first taste of rooting against England. I was good at it because I had been rooting hard against the NY Yankees for five years. England in the Sven years: was it all just a dream? Did it really happen? The demented last minutes of the France game made it clear there was something karmically off-kilter with England. What other country could have the France of Zidane and Henry near suffocation and lose so disastrously? It's incredible to recall - the missed Beckham penalty, then the Zidane freekick and Gerrard horror back pass - all in injury time. Who else but Sven's England could lose like this?

I arrived in Lahinch in late May but by June 24 - the day England crashed out - I was among 40 people watching the England vs Portugal penalties through the Flanagan's window. I wasn't in on the joke on the penalties then - that England would obviously lose. It felt dramatic when Ricardo strolled up to the penalty spot. Afterwards, there were hoots and hoolers and dancing in the street that most Ireland wins wouldn't inspire.

That summer, there were other beguiling eccentricities for a tournament newbie: the Sweden-Denmark 'draw' and a vexed Trapattoni, Latvia somehow being represented and peak Milan Baros. I made my first legal bet ahead of the tournament: two quid on Portugal and the Czechs to reach the finals at 40-1. It was the best bet I ever made but it was ruined by Greece.

Every tournament gets the winner it deserves, but Euro 2004 seemed better than that dour, uninspiring Greece team. They grinded their way through France, then the Czechs and eventually the hosts. They won with stamina and fitness and luck. It was a sad reminder that freakish fitness and collective unity will always stifle genius. A few months later, Greece's top two sprinters were busted for doping. I've never been moved by the romance for that Greek team. They were the boring guy at a party who can stay up the latest.

I'd rather chat to the guy swilling Buckfast who'll be passed out in the bathtub by midnight. He'd be the goalkeeper in short sleeves and no goalie gloves.

SEE ALSO: Here's A Completely Random Fact About Every Nation At Euro 2020 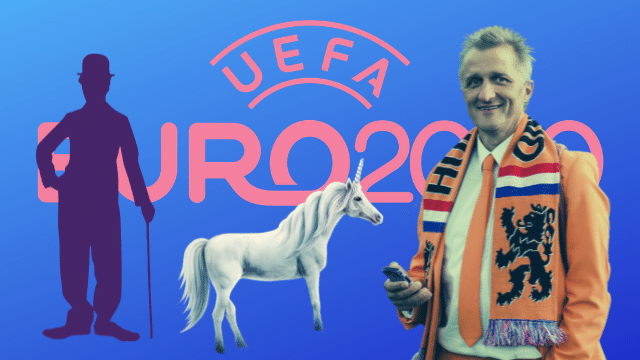