Weekend TV Review: Why Soccer AM Needs To Be Put Out Of Its Misery

Before the latest parade of desultory Soccer AM guests, Sky broadcast Man United and Leicester live on Saturday morning, and attention focused on The Dropping of Wayne Rooney.

Mourinho was quizzed on the matter, and it was the main subject of debate between Graeme Souness and Gary Neville. The latter said that the decision was both correct and inevitable, that Rooney would now have to get used to having a reduced role. It was the main talking point of the game: the mocking of Rooney for his being married to the paradox of ageing flesh and undiminished self-importance.

Sky rubbed things in for Rooney by prefacing the game with a metaphor.

The game was prefaced by another beast staggering on miles beyond its sell-by date, coming to terms with a reduced role: Soccer AM. The breakfast show that invented b****r has shrunk in size: it once sprawled across three hours of our hungover mornings, now it occupies 90 minutes.

This column watched Soccer AM regularly in the dying embers of the Lovejoy reign, the entirety of Andy Goldstein's stint and the early days of the Max Rushden days.

Helen 'Hells Bells' Chamberlain is still there, and is now accompanied by John 'Fenners' Fendley. The studio has been given a revamp too, with Fenners and Hells Bells seemingly sitting in the footwear section of Lifestyle Sports, rather than in front of a couple of jerseys masquerading as subtle marketing for Sky Sports' live football: 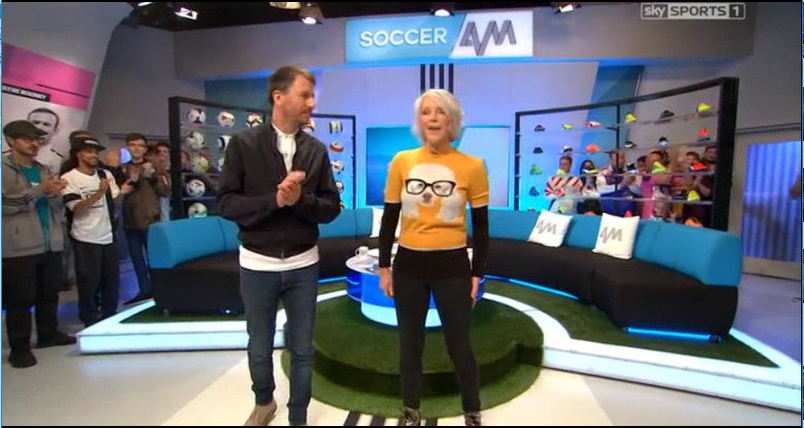 On this week's show, they were joined by Muzzy Izzet, a gang of comedians in character calling themselves Kurupt FM, and Liverpool band The Coral. The couch ended up resembling a kind of N-Dubz tribute act at a World Vine Conference: 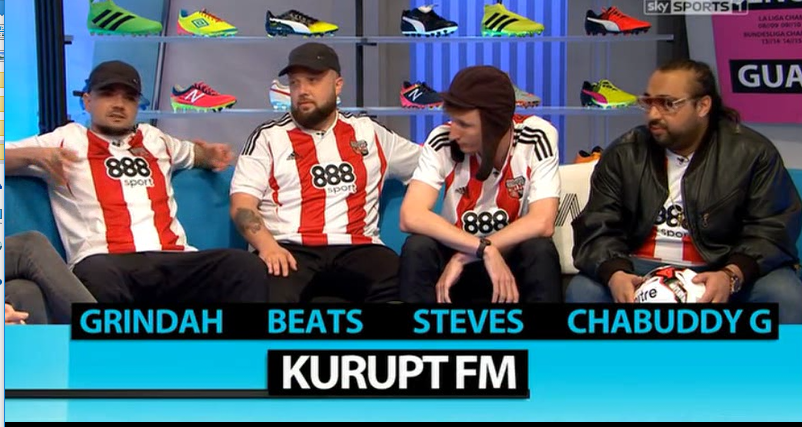 These Soccer AM guests were, of course, incredibly unfunny, with their leader, MC Grindah, describing himself as 'the best-kept-secret in Brentford',  an opinion we have no reason to doubt.

Once upon a time, Soccer AM was at the vanguard, a capacious three hours giving voice to an entire football sub-culture, of fans who fetishised jerseys, football boots and outrageous acts of skill. When football was all serious men in grey suits sitting behind desks, Soccer AM set it free and put it on a sofa. Soccer AM hit on the idea that football is the most important of the unimportant things, and the show's treatment of football as a culture rather than a sport was a masterstroke.

Now, however, it is dated. When it first started, there were no websites - like this one - and social media offering instant access to rabonas, nutmegs and people falling over. In the early days, Soccer AM had a monopoly on them: they were collecting content before anyone. Now, however, it feels like reheating last week's dinner. They were also innovative: the Crossbar Challenge has been ripped off more often than Wonderwall at a house party.

No longer. They haven't been helped  by Sky aping their approach for the baffling idea of Friday Night Football, which is all open-necked shirts, manspreading and Tubes.

But the show has become so utterly repetitive and tired that it can't even hide behind the clause that repetition repetition is a form of comedy. Soccer AM guests are increasingly dull and obscure, like MC Grindah and the ubiquitous Jimmy Bullard.

Their regular slots - like the 'miracle' slot, where a funny foreigner in a game Sky have rights for extravagantly fakes injury only to miraculously jump to his feet a moment later -have been on for years and years and are dreadfully tired.

Have a look at how tired Fenners looks as he asks MC Grindah introduces a goals compilation, and the clear second's dead air before the 'Applause' sign was lit:

The Coral, by the way, looked like they would rather be anywhere else:

We're not sure how much longer Soccer AM will limp on, mercilessly mocked by its own echo. Once at the vanguard, now it is dated, swallowed up by social media and plagiarism.

It seems to be staring down what Gary Neville calls the inevitable.

Once fresh, young and important. Now stale and moribund.

Last week, we brought you the distressing news that Howard Webb may be being kept hostage in a trailer by BT Sport. This column did not watch BT Sport Score this week - because it's rubbish - so we are unsure of Howard's safety. If you have any sightings of Howard to put this column's mind at ease, please tweet @gcooney93.

Sky put a microphone on CJ O'Stander during Munster's game at the weekend, and the results were terrific.