With Jeff Stelling announcing his departure from Soccer Saturday at the end of the season, we decided to have a look back at some of his most memorable moments from his time on the show.

Few can match this afternoon in May 2017, when Stelling beloved Hartlepool United faced relegation from the Football League for the first time in 96 years.

It's fair to say he went through every possible emotion on the day.

It's a dark, dark day for Hartlepool United who were relegated from League Two meaning they are out of the Football League for the first time in 96 years.

Pools' most famous fan Jeff Stelling was wearing the club's jersey under his waistcoat on Soccer Saturday, and as their crucial clash with Doncaster Rovers was live on Sky Sports, Paul Merson was tasked with relaying information to his good mate.

Hartlepool needed to win, and for Newport to lose, in order to stay up on goals scored... And they so nearly did it.

With 10 minutes to play in both games, Hartlepool took the lead which had them ahead in the race for surival, and the entire Soccer Saturday team went absolutely mental.

But it wasn't over yet.

Dubliner Mark O'Brien was the man who plunged the dagger into Stelling's heart with an 89th minute equaliser that kept Newport in the Football League at Hartlepool's expense... And the entire Soccer Saturday team were gutted.

That's football, ladies and gentlemen, the highs and lows, in a matter of minutes.

Your heart would break for Jeff Stelling. You could really see how deflated the entire room was for him, especially after the wild scenes moments before.

Hats off to Newport, who were dead and buried back in March as they sat 11 points off of safety. Their great escape is truly remarkable, but it may well be remembered for what it did to Jeff. 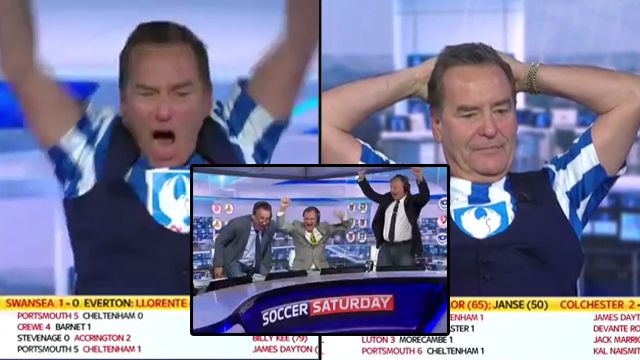 Football
2 months ago
By PJ Browne
Corkman Scores Hat-Trick In Strange League Two Victory
Football
1 year ago
By Maurice Brosnan
"They Said 'You're All Right. Find A New Club'" - Keena Keeping The Faith
Football
4 years ago
By PJ Browne
Watch: Northern Irish Footballer Sent Off After Squaring Up To Ref
Previous Next