It's becoming a recurring theme of a weekend afternoon, but it was yet another afternoon to forget for Manchester United manager Ole Gunnar Solskjaer, as his team fell to a limp 2-0 home loss to their local rivals Manchester City.

The pain of losing a home derby fixture was compounded for Man United by just how bad the performance was, with only one shot on target mustered by Solskjaer's men over the course of the entire 90 minutes.

That wasn't the only pain for manager Solskjaer, who seemed taken aback and emotional when quizzed about his players' mentality after the game.

One of the players who has failed to show up for Manchester United this season is captain Harry Maguire. After being named in the team of the tournament at EURO 2020, Maguire has not been the same player, and he and fellow underperformer Luke Shaw were at fault for City's second goal, with a baffling piece of defending allowing Bernardo Silva to sneak in.

Maguire was downbeat in his post-match interview, saying that he felt the team had lacked the belief to get themselves back in the game after going 1-0 down so early on.

When Solskjaer stepped up for his post-match interview, he was quizzed on Maguire's comments - and he seemed visibly surprised and hurt by his captain's assertion that Man United lacked belief in themselves.

Have they said they lacked belief, yeah?

It's a big thing. We're human beings and that's our job, now - it's my job to work on going into the next game with the right mentality, a winner's mentality, a more positive mentality.

Of course, when you play, you might lose belief during the game when you can't get to the ball...we couldn't make them...these transitions that we're so good at, today we just couldn't get enough of them.

It's been a tough few weeks for Man United, with consecutive home losses to Liverpool and Man City compounded by the humiliating nature of the team's performances in both games.

The first signs are emerging that the mood is changing at Old Trafford, and the lack of unity in messaging between captain and manager in Saturday's post-match interviews is a worrying sign for Ole Gunnar Solskjaer, whose job is now under serious pressure. 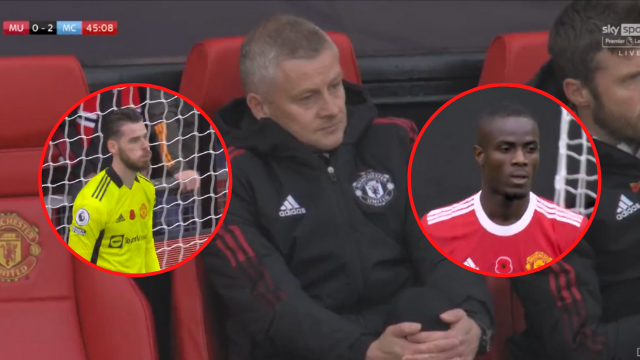