The Man United manager is unhappy with comments Klopp made last season about the amount of penalties United have been awarded in recent times.

Last season, Man United were awarded 11 penalties in the Premier League - only Leicester City were awarded more over the course of the season. All in all, they scored an incredible 17 penalties across all competitions, making up about 14% of their total goal tally for the season.

Back in January, Liverpool manager Jurgen Klopp questioned how Man United were being awarded so many spot-kicks, after his Liverpool team were hard done by not to be awarded one against Southampton.

Other teams would get a penalty for this. The handball – can someone please explain that to me? Manchester United had more penalties in two years than me in five and a half years – but no excuses for tonight.

This year, Man United have felt hard done by themselves by multiple penalty incidents, most recently in Wednesday's EFL Cup tie with West Ham, when Jesse Lingard was denied a penalty and accused of diving after being dragged to the ground by Mark Noble.

Mark Noble trying to get his revenge on Lingard 😭 pic.twitter.com/errS09nngi

Now, Man United manager Solskjaer seems to have suggested that the January comments from Klopp have influenced the referees against giving penalties to the Red Devils.

Solskjaer was speaking at United's press conference ahead of Saturday's clash with Aston Villa, where he made some not-so-subtle - but very questionable - remarks about Jurgen Klopp.

We just have to hope that we get what we deserve [in terms of penalties]. We should have had three penalties in the last two games.

A certain manager last year was starting to worry about us getting penalties last season and after that, it seems like the decisions are more difficult to give.

I've seen a big, big difference since then on. But we have to just leave that up to the referees and hopefully they'll make the right calls soon.

Solskjaer's suggestion that Klopp has influenced the referees is a fairly ridiculous one.

Before Klopp's comments last year - which came less than halfway through the season - United had been awarded six penalties in the Premier League. They went on to be awarded another five before the season's conclusion, which hardly suggests any correlation between the two incidents.

You'd think that, if Solskjaer was going to wait eight months to reply to Jurgen Klopp's comments, he may have done some research beforehand to make sure he wasn't going to come out with some blatant misconceptions.

Liverpool in the Premier League under Klopp: 225 games, 7,192 touches in the opposition's box

Man Utd in the Premier League under Solskjær: 102 games, 2,641 touches in the opposition's box

Both 32 penalties awarded each. 🤔 https://t.co/B0BkmaBu4o

Man United also topped the charts of most Premier League penalties awarded in 2018/19 and 2019/20 - meaning that they have been around the top of the charts in every season under Ole Gunnar Solskjaer.

The fact that Paul Pogba, Jesse Lingard, Marcus Rashford, Anthony Martial, Juan Mata, Mason Greenwood, and Bruno Fernandes have all had spells as United's penalty taker since Solskjaer took over speaks volumes about the amount of spot-kicks they have received.

The two sides face off this day next month and, despite the history behind the fixture, this is the first time in a few years there has been some genuine rivalry between the two teams.

How World War 3 could start: pic.twitter.com/QZyQWbgJ8k

Last year's fixtures were evenly matched, with a win each and a draw across two league games and an FA Cup tie.

If there's a penalty incident either way in October's game, you can imagine there will be fireworks between Solskjaer and Klopp in the aftermath. 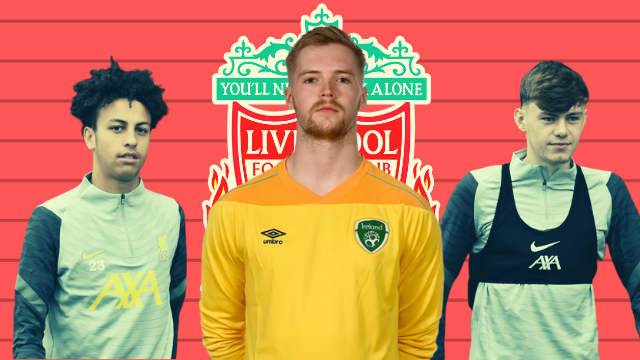 Football
1 hour ago
By Gary Connaughton
Jurgen Klopp Sums Up Just How Far Caoimhín Kelleher Has Come At Liverpool
Football
15 hours ago
By Jonathan Byrne
Watch: Caoimhín Kelleher Pulls Off Wonder Save In Liverpool Cup Win
Football
1 week ago
By Gary Connaughton
Jamie Carragher Not Convinced By Jurgen Klopp's Approach In Arsenal Draw
Popular on Balls
Golf
1 day ago
By PJ Browne
Shane Lowry And Rory McIlroy Delighted For Seamus Power
GAA
1 day ago
By PJ Browne
'It Was Crazy, We Were Still Hurling With St Kieran's College At The Time'
Football
21 hours ago
By Jonathan Byrne
Remembering Jimmy Bullard's Timid Big Dunc Stare Down From 2006
Football
1 day ago
By Jonathan Browne
Scott Brown Really Enjoyed Playing Against Rangers Last Night