The Best Sports Documentaries To Check Out On Prime Video

We’re suckers for a good sports film or documentary here at Balls. We’ve seen some shocking sports films in the past, but when they’re good, they’re usually very, very good. Prime Video have got a great selection to offer – and we’ve gathered some of the best together right here for you. Here are the best sports documentaries on prime.

THE ALL OR NOTHING SERIES

Amazon have tracked so many of the world’s best teams with the All or Nothing series that even we were surprised. There’s the well-known Manchester City and Spurs ones (the best bits of which you can check out here) but they’ve also followed the New Zealand All Blacks and NFL teams like the Arizona Cardinals and the Carolina Panthers (among others).

The All or Nothing series gives a brilliant access-all-areas insight at some of the world’s best sporting teams and is well worth a watch. If for nothing else, following José Mourinho in an behind the scenes during his first year in charge of Spurs is worth any price of admission for us.

There’s also a new season inbound following this season at Juventus, meaning there’s all the more reason to catch up on previous offerings.

You can watch All or Nothing by signing up for a 30 day free trial of Amazon Prime Video here.

SIR ALEX FERGUSON: NEVER GIVE IN

Directed by his son Jason, this documentary appears to be the definitive retelling of the career of the legendary Man United manager Alex Ferguson.

Beginning with his time as a player at Rangers and moving all the way up to the present day, the documentary takes in all of his playing and managerial careers, as well as his personal life - including his recovery from a brain haemorrhage in 2018.

If you weren't captivated enough by that, Eric Cantona also appears as an interviewee. That's all we need to say.

You can watch Sir Alex Ferguson: Never Give In by signing up for a 30 day free trial of Amazon Prime Video here.

Asif Kapadia’s 2019 documentary on Diego Maradona is one of the best sports documentaries we’ve ever seen. Following Maradona exclusively during his seven years at Napoli in the 1980s, it tells a harrowing tale.

We can’t begin to do the film’s story justice but, using the archive footage approach that made Kapadia’s 2011 film Senna so successful, he beautifully tells the story of a footballing genius who got dragged into a life of crime. You won’t be able to take your eyes off it.

(There is also a fantastically unexpected appearance for Jimmy Magee. If you’re not already sold on this film, we don’t know what will convince you.)

You can watch Diego Maradona by signing up for a 30 day free trial of Amazon Prime Video here.

Steven Gerrard is undoubtedly in the pantheon of Liverpool’s greatest ever players. Influential in their 2005 Champions League final win and two-time winner of the PFA Player of the Year, he is surely the greatest player of the Premier League era for the club.

But he retired from playing without ever winning a Premier League title. This documentary – made with Gerrard’s participation – takes a fascinating look at the career of one of the Premier League’s greatest ever players and his quest for that elusive league medal.

You can watch Make Us Dream by signing up for a 30 day free trial of Amazon Prime Video here.

MotoGP is one of the coolest and most dangerous sports out there. Riders reaching speeds of 300kph+ while racing side-by-side? The element of danger, coupled with the eccentric personalities in the paddock, makes it a consistently thrilling watch.

This 2003 fly-on-the-wall documentary follows two consecutive seasons of the championship, just as the legendary Valentino Rossi was rising to the top of the sport. Narrated by Ewan McGregor, it’s a thrilling light watch, well worth checking out for any sports fan.

You can watch Faster by signing up for a 30 day free trial of Amazon Prime Video here.

Leeds United’s return to the Premier League was one of the biggest sporting stories of 2020 and they’ve been a fantastic addition to the top-flight with their exciting brand of football. It was an emotional return for fans, after 16 years away from the first division.

This documentary – narrated by Russell Crowe – follows Marcelo Bielsa and his team during the 2018-19 and 2019-20 seasons in the Championship, as they fight to return to the Premier League. It’s a captivating story and, like the All or Nothing series, provides incredible behind the scenes access.

You can watch Take Us Home: Leeds United by signing up for a 30 day free trial of Amazon Prime Video here.

SEE ALSO: 5 Iconic Mourinho Moments From Opening Episode Of 'All or Nothing: Tottenham Hotspur' 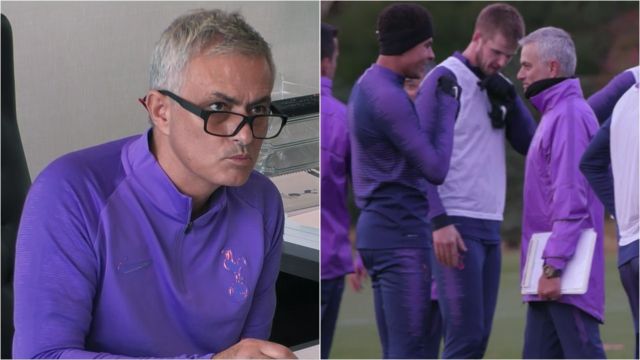 All or Nothing: Tottenham Hotspur Amazon Prime Video diego maradona