St Johnstone progressed to the semi-finals of the Scottish Cup with a dramatic penalty shootout victory over Rangers on Sunday.

There was high drama even before the shootout with St Johnstone scoring an equaliser in the 122nd minute .

The game had finished goalless after normal time. Rangers took the lead through James Tavernier in the 117th minute. Four minutes later, St Johnstone went all in, sending up goalkeeper Zander Clark for a corner.

Clark found himself unmarked in the box and headed the ball onto the foot of teammate Chris Kane before it rolled into the net.

Goalkeeper Zander Clark flicks it on and Chris Kane slots it home! 🔵⚪

"There have been so many times this season when I've thought about going up and looked at the bench and they said 'no'.

"Tonight, I thought, 'It's all or nothing'. Then typical striker, I think Kaneo toe pokes it in on the line!"

Anybody got the goals panel number ? Asking for a friend 🤷🏼‍♂️ unbelievable shift from the boys tonight 💙 back to the national stadium what a team @StJohnstone

Clark was also the hero in the shootout, saving penalties from Tavernier and Kemar Roofe before Alistair McCann sent St Johnstone into the last-four.

St Johnstone head into the semi-finals looking to win a cup double having already beaten Livingston in the League Cup back in February.

"Typical strikers, I think Kaneo toe pokes it in on the line! Devastated not to score!" 😂#ScottishCup pic.twitter.com/oANADSvodg 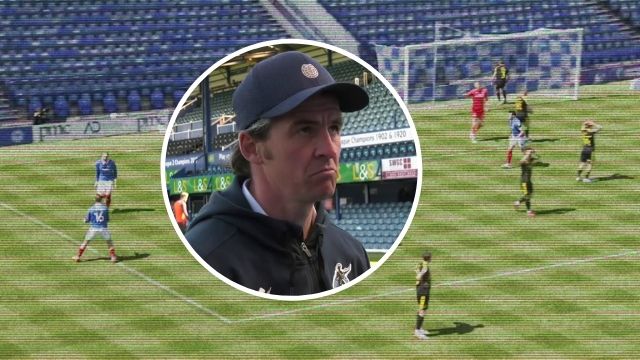