"They Were Giving Me Hugs And That, And I Felt Like A Prick" - Stephen Ireland Opens Up On Grannygate

At 33, it's hard to know if Stephen Ireland's career is over or not. He's without a club since his spell with Bolton ended in May. He says he still has a lot to offer but other clubs don't seem to agree.

It's a tough fall for a man who was Manchester City's player of the year ten years ago. Before that, we assumed the Irish midfield would be built around him for more than a decade.

From scoring a winner against Wales in Croke Park to rescuing the country from immortal shame in San Marino, Ireland the next big thing, until he wasn't.

He earned only six caps before killing off his two grannies and leaving the international scene for good at the age of 21. 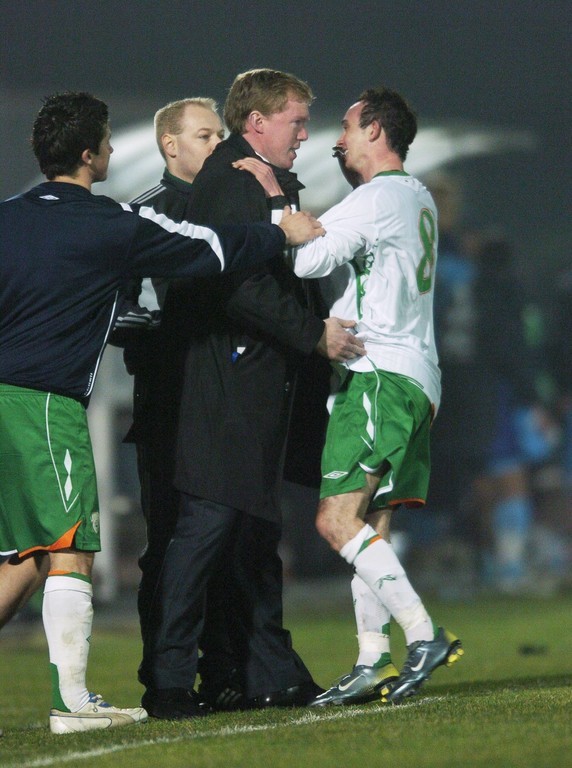 In an extensive interview with Sam Lee in The Athletic, Ireland discusses the most infamous part of his career and how he got caught in a lie, but reveals it was the final straw in a constant battle to get out of playing for Ireland to spend more time with his young family.

With the Ireland thing, the first couple of camps I got called up I was the happiest man on the planet. It was like I’d won the lottery, I loved it, it was such an amazing achievement.

After that it became a bit of a circumstance thing. Steve Staunton said I could bring my kids and they would put them in a hotel room with a babysitter, but what kind of life is that for two kids? So I didn’t do it and I had to pick and choose my moments that I could play for Ireland and when I couldn’t. I just found the 10-day camps were too much for me to give.

I remember I was playing live on TV for City, I was meant to fly out that night with Richard Dunne to meet up with Ireland, and I’d ring Steve Staunton up after the game and say: ‘I feel sick, I can’t come’. He was like: ‘I just saw you play live on TV!’ I couldn’t sacrifice going to play for Ireland, because literally for some reason it became a case of having to pick Ireland over my kids, and all day I’m going to pick my kids.

Eventually Ireland took the white lies a little too far and was caught in the most infamous of football stories, one that 12 years later, still hasn't gone away. The lie about his grandmother spawned further lies, and eventually the whole thing was out of control. Ireland claims he even considered quitting the game altogether as a result.

I just wanted it to blow over and before you know it, it just went boom. It was mental. Mental. And I’m thinking: ‘All I said was something small.’ I know it’s not. I know it’s not something you do. It was in the heat of the moment in the changing room after the match. I was buying myself time, basically.

The other players asked where I was going, so I said: ‘Back to England for a few days because my nan’s not well.’ They were giving me hugs and that, and I felt like a prick then. Imagine going back in and saying: ‘Alright lads, listen…’

“On reflection, I probably should’ve gone back and faced the music for a couple of days, but I guess I kind of ran from it. I was doing so well at Man City I didn’t want to go back, even more so.

“I wish I had dealt with things differently, that the whole thing was dealt with differently, actually, on both sides, but I wouldn’t say I regret not having played for Ireland since."

Ireland's availability became a topic of conversation throughout the Trapattoni era, and even into the Martin O'Neill tenure. He would never play internationally again, but the promise of his club career was never fulfilled either.

In a fascinating,extensive interview in The Athletic ahead of his appearance in Vincent Kompany's testimonial game, Ireland discusses the ups and downs of his career, his struggles to get a club at 33, and the struggles of being a single father early in his career, barely surviving with the money he was making at Manchester City, being helped out by Richard Dunne and Micah Richards.

Football
1 month ago
By Jonathan Browne
How To Watch Ireland Vs Belgium At The Aviva Stadium
Football
9 months ago
By Michael McCarthy
Quiz: Name The Irishman With The Most Premier League Appearances Per Club
Football
1 year ago
By Gary Connaughton
Those Already Calling For Stephen Kenny's Head Need A Swift Dose Of Reality
Previous Next

Football
1 month ago
By Jonathan Browne
How To Watch Ireland Vs Belgium At The Aviva Stadium
Football
9 months ago
By Michael McCarthy
Quiz: Name The Irishman With The Most Premier League Appearances Per Club
Football
1 year ago
By Gary Connaughton
Those Already Calling For Stephen Kenny's Head Need A Swift Dose Of Reality
Popular on Balls
Football
19 hours ago
By Luke Delaney
Obafemi In As Stephen Kenny Names 27-Man Nations League Squad
GAA
2 days ago
By PJ Browne
How A Kerry Guard Ended Up Playing For The Tipperary Footballers
Football
17 hours ago
By PJ Browne
Five Things Learned From Stephen Kenny's Nations League Press Conference
Motorsport
1 day ago
By Eoin Harrington
F1: New Team Radio Clips Show Sergio Perez Frustration With Team Orders In Barcelona