Stephen Ireland Would Love An Ireland Return.... 13 Years Since His Last Cap

It's two years since Stephen Ireland has played a professional game of football. At 33, he's keeping fit and definitely hasn't given up and signing somewhere and being as good as ever. He's even claimed, all these years later, he'd love to go back to the Republic of Ireland and make up.

In an extensive sit down interview with The Athletic's Daniel Taylor, Ireland tells numerous fascinating stories from his career, mainly at Manchester City, and even talks about recent run ins with Bruno Fernandes, who Ireland can't quite believe loved the former City player growing up, even "always" signing him in Football Manager.

The entire interview is well worth a read, but the bit that jumped out to us was Ireland's almost throwaway remark that a return to Ireland would on his list of ambitions.

Ireland has been doing fitness training with a couple of his neighbours over the break including Fernandes and his Manchester United teammates Fred and Diego Dalot, and Ireland still believes he can hold his own with players of that standard.

“It has made me think, ‘God, there isn’t much of a difference. I really believe I have three or four years left in me, minimum. Physically, I feel 27 or 28. I just want to get motoring again because there is so much more to come out of me.”

“The dream would be: get back with a club, smash it, go back to Ireland and undo all that scenario.”

Now, whether Stephen Kenny would be interested in putting a 33 year old who hasn't played international football in 13 years into his young squad even if Ireland did get back playing and rediscovered his best ever form is doubtful, but his desire for a reconciliation is striking.

The scenario Ireland wants to undo is the Grannygate fiasco of 2007 when he told Steve Staunton his grandmother had died so he could leave international camp during a crucial qualifying away trip. Neither of Ireland's grandmothers had died. His girlfriend had had a miscarriage. It marked the end of his international career. 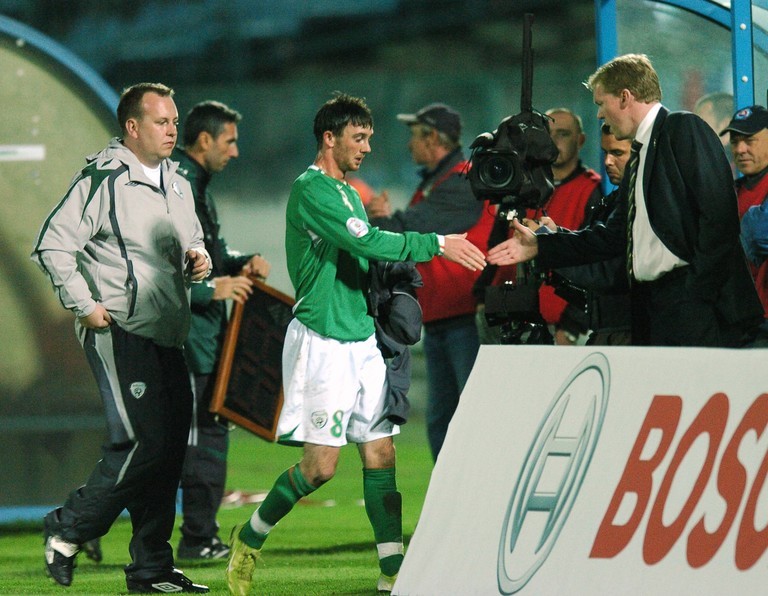 Ireland claims being a single father to two children was the priority at the time, and international trips were far too stressful.

“It came down to prioritising. Can I leave my kids for two weeks to play for Ireland? As much as I’d loved to have done that, I couldn’t. I was away at matches, stressed out of my head because of my kids. I had no support. I had to pick option A or option B. But of course, I wish things could have been different.

Why wouldn’t I want to play for my country 150 times? Why wouldn’t I want to be an Irish hero? Who would turn their nose up at that? Why would it ever be my agenda to be disliked in Ireland? I had death threats, I had all sorts. Christ, I didn’t want to leave the way I did. I didn’t want to be disliked in my own country but it came out of circumstances which were tough.

Ireland believes much of his issues with Roberto Mancini at Manchester City came about because of his international exile.

He definitely had an issue with me, 100 per cent. Giovanni Trapattoni was the manager of Ireland at the time and they were best mates. Mancini kept saying to me, ‘Go back, go back. You need to go back to play’. I said to him, ‘Right now, I’m not even playing for Man City. That has to be my focus’ but he wouldn’t let up.

I was always first to team meetings because I was so good with timekeeping. I’d walk into the room and sometimes, it was only me and him there. I’d think, ‘Oh shit!’ — I knew what was coming. We might have a really important game the next day but he wouldn’t stop talking about me going back to Ireland. In the end, I said, ‘Look, get Trapattoni over here, we’ll sit down, have a coffee and try to hammer it out together’. It never happened though.

The entire interview is a fascinating insight into Stephen Ireland and can be read on The Athletic.

Football
2 months ago
By Balls Team
7 Players Whose Chant Is Better Than They Are: Part 2
5

Football
11 months ago
By Michael McCarthy
"They Were Giving Me Hugs And That, And I Felt Like A Prick" - Stephen Ireland Opens Up On Grannygate
10