Stephen Kenny Taking The Positives From Ireland's Draw In Sofia

It was not the result he would have hoped for, but Stephen Kenny managed to get a positive result in his first game as Ireland manager.

The draw in Bulgaria offered encouragement in many areas, but improvements will also be required. Ireland kept the ball well, although they would like to move it with more urgency. In defence, they looked vulnerable on the counterattack.

Ultimately, this is a work in progress.

Speaking to Sky Sports after the game, Kenny admitted that while he was hoping for three points in Sofia, he was encouraged with some of what he saw over the 90 minutes.

I think it's a game we would have liked to win, for sure. We had good passages of play in the game and created some good chances.

Bulgaria did catch us on the counterattack and created some good chances also. There was a lot of good play in the game but we will need to improve in certain areas...

We had a lot of the play. I felt we never surrendered relief really. We kept doing the right things and deserved an equaliser.

We would have never deserved to lose that game, absolutely not. I think we could have won it if we had taken our chances to go one up, but that's the way it is.

It could be a point gained when you consider the late equaliser...

That's our first goal from a corner since Daryl Murphy in 2017. We were conscious of that. It was just a brilliant header from Shane Duffy to be honest.

I think Robbie Brady showed a terrific attitude, closing down the Bulgarian defender and winning the corner, taking the corner and putting in the flight that was needed for Shane.

He still had a lot of work to do, but he buried it in the corner. A great finish from him. 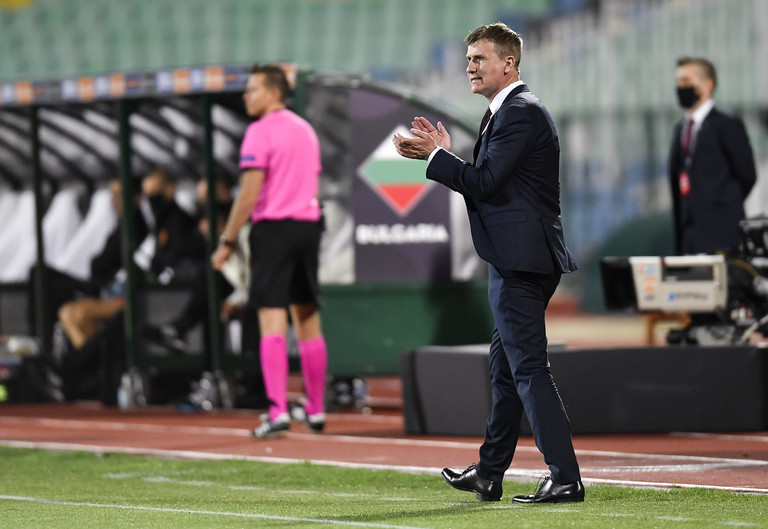 Kenny's front three was a talking point before the game, with Aaron Connolly, Adam Idah, Callum O'Dowda all inexperienced at this level.

They did well at times, with Connolly looking especially threatening throughout.

The Ireland manager said that there was still plenty to come from the young forwards, while also summing up his own emotions after taking charge of his country for the first time at senior level.

Individually they all did quite well, I felt. There was some really good individual play from Callum O'Dowda and Aaron Connolly, they looked dangerous. Aaron could have had a hat-trick on another night.

He had a few chances. He is a real goalscoring threat, and we need to add goals. You want players in wide areas contributing in that regard.

With Adam, it is a tough job for a young centre forward coming in. I though he acquitted himself very well.

Of course they can all improve, but that's a good start from the three of them...

To be honest, because it's our first game since last November, I hadn't experienced the matches with no crowds. It's quite surreal I must admit.

It's just a huge honour to manage your country. There's no greater honour, it's the ultimate honour.

We wanted to win the game. We've got a late draw, so one point is something. It's a quick turnaround against Finland and we've got to try and got a victory on Sunday.

Football
2 weeks ago
By PJ Browne
'Brighton Have Been Fantastic. Graham Potter Is A Brilliant Football Man'
Previous Next

Football
1 week ago
By Donny Mahoney
The Depressing Stat That Captures The Extent Of Ireland's Goalscoring Woes
Football
1 week ago
By Balls Team
'It's Hard To Believe That We Didn't Score'
Football
2 weeks ago
By PJ Browne
'Brighton Have Been Fantastic. Graham Potter Is A Brilliant Football Man'
Popular on Balls
The Rewind
18 hours ago
By Donny Mahoney
The One Truth Soupy Norman Knew About Dublin That Dubliners Are Still Too Afraid To Admit
6