Stephen Kenny has said that "loan periods can be very beneficial" for players who aren't getting regular playing time in the Premier League. The Ireland manager hasn't been afraid to drop players who don't play regularly since taking over, pushing regulars like Darren Randolph, Robbie Brady and Shane Long aside for younger players who play more regularly for their club no matter what level that is at.

This has meant players like Gavin Bazunu and Chiedozie Ogbene, who play their club football in League One, start and have become part of the squad. Bazunu in particular is a player Kenny highlighted as someone who has profited from going on loan. Bazunu, of course, is contracted at Manchester City but has ventured out on loan to Rochdale and Portsmouth in League One in the past two years.

Speaking to Alan Cawley ahead of the FAI Cup final, Kenny said:

So sometimes loan periods, as happened with Gavin Bazunu, we picked him when he was playing for Rochdale when they were near the bottom of League One, but we had the conviction because we knew him, I had him at the Under 21s. I knew his character, I knew his talent. So the loan periods can be very beneficial for young players"

Bazunu would end up getting relegated to League Two with Rochdale last season but that hasn't halted his development in any way. He is now playing with Portsmouth where he has stood out.

“Gav has been different class… He almost plays as a third centre-back behind us. On the ball, shot stopping, everything about him is just different class.”

This begs to question, why are players like Aaron Connolly and Adam Idah choosing to stay at their clubs? Connolly has played four games in all competitions for Brighton this term and Idah has played a combined 49 minutes in the Premier League for Norwich this season. Dropping down a level can revitalise their careers and help them reach the highs of the Premier League again with a new club.  The lack of gametime for the forwards is a major concern and something Kenny pointed out.

You can never be certain how things will go for players at club level, there are no guarantees and we have seen that with our forwards, they struggled to get regular game time in the Premier League.

It’s very hard for young players to breakthrough in the Premier League, very few do in their teenage years and into their early 20s.

There's even more players in the Irish set up that could develop on loan in the Championship. Liverpool goalkeeper Caoimhin Kelleher has played Champions League football and hasn't put a foot wrong in any game he has played, but he hasn't played that many. Kelleher has stated that he is happy to remain at Liverpool but it may not benefit his development if he remains as a backup to Alisson.

I'd love to be here for the rest of my career, definitely. I think since I've come here, since I was 16, I've loved every minute of it.

You can listen to the full Stephen Kenny interview with Alan Cawley below.

👉 Exclusive Stephen Kenny interview in new #strongerwithsport episode as the @FAIreland boss discusses his Ireland tenure, the future of the national side under him, and his rich history with @ExtraIRL FAI Cup 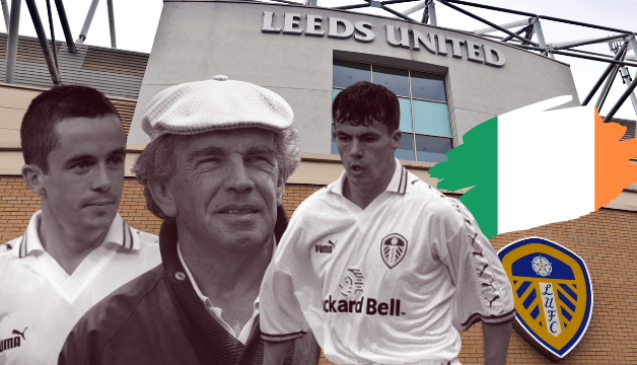 Football
4 months ago
By Gary Connaughton
Aaron Connolly Admits Criticism Has Affected Him After Brighton Departure
Football
4 months ago
By Gary Connaughton
Graham Potter Non-Committal On Aaron Connolly Future Ahead Of Loan Move
Football
7 months ago
By Gary Connaughton
This Window Should Give Us A Clear Picture Of Kenny's Attacking Intentions
Popular on Balls
Rugby
2 days ago
By Colman Stanley
'That Pace, That Intensity, That Organisation' All Black Legend Has High Praise For Leinster
GAA
2 days ago
By PJ Browne
Cusack Has Little Sympathy For Gearoid Hegarty After Red Card
Football
10 hours ago
By Colman Stanley
Wagatha Christie Trial Sheds New Light On England's Euro 2016 Disaster
GAA
17 hours ago
By PJ Browne
GAA President Explains Why Tailteann Cup Won't Be All-Ireland Curtain Raiser