Being in the presence of Stephen Kenny is a different experience to being around his predecessor. Too often would you walk away from Mick McCarthy's press conference confused by what you had just heard, with mixed messages being delivered in what were often tense or dismissive exchanges between McCarthy and those who were present.

Sitting across from the table from the new Ireland manager, it is difficult not to be enthused about the future of Irish football. He is considered in what he says, taking a moment to pause and think before answering each question that is asked. The way he speaks with such passion is infectious, portraying a remarkable in-depth knowledge of each Irish player he mentions.

None of that was dampened by the strange circumstances surrounding today's media event at FAI headquarters. The current health concerns ensured this would always be somewhat of an odd briefing. Not only were the face masks on the visiting journalists an odd sight, but the football side of things is in somewhat of an unknown territory. 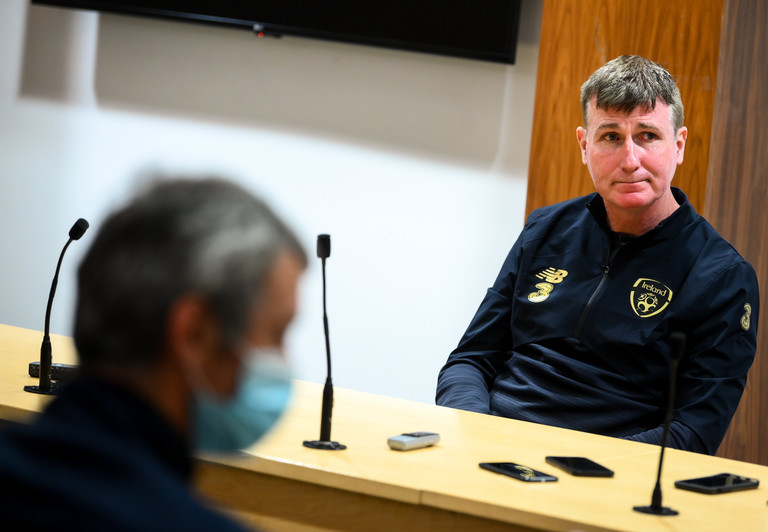 Ireland haven't played a game in eight months, during which time we have had a Euro 2020 play-off postponed and experienced a change of manager. Had everything gone to plan, the country would have been gripped by the prospect of a major tournament on home soil over the past month. We had all hoped Ireland would have been one of those taking part.

That hasn't happened. Nearly ten months will have elapsed between Ireland games by the time Kenny takes charge of the team for the first time in early September. There is a real possibility that he will not have had the opportunity to see any of his players in the flesh before then.

For now, Kenny has made himself a permanent fixture at FAI headquarters. He, along with assistants Keith Andrews, Damien Duff, and Ruadhri Higgins, have been using their time to analyse videos of both our own players and future opposition. The former Dundalk boss revealed plans to install a video analysis room in the building for the first time, something that will allow them to come together on a regular basis to look at footage of their players.

Of course, all of this is made possible by the fact that his entire coaching team resides in Ireland. This is something that has rarely been the case for Ireland managers over the past four decades or so.

Myself, Keith Andrews, Damien Duff, Ruadhri Higgins, we all live in Ireland. That’s never happened before, where the whole management team is based in Ireland.

We will be based in Abbottstown, that doesn’t happen. That office inside has probably been vacant a lot of the time, as managers have traditionally lived abroad.

We're putting a video analysis room here, which we never had, in here that we can work on, we can scrutinise the 40-odd players that are playing every week. We can look at them, analyse how they're doing...

We've presented to each other... done Finland, done Wales and of course Slovakia.

Which is very important. So we've been able to sort of really analyse them at length, all of the games that they've played, their strengths and weaknesses, how they play, how they build up... what they do.

The fruits of this labour were obvious during the 25 minutes or so that Kenny spoke to the gathered journalists. Not only could he go into granular detail about various members of the Slovakia squad, he could also vividly recall how they had performed against another future opponent in Wales.

"They're very possession based and like to control the games which I do as well of course," he said of the Slovaks.

"My ambition as a manager is to control as many games as I can. It's not always possible but that's a definite plan." 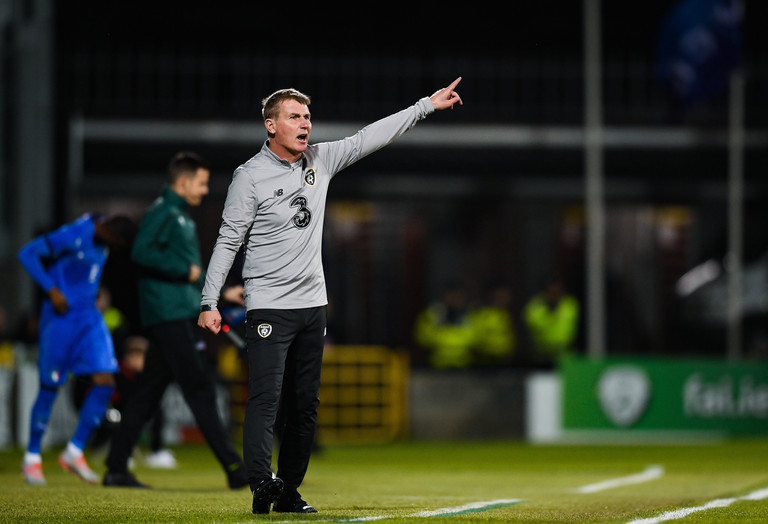 That plan is already in action. While there will be little to no contact with his squad until the first week of September, Stephen Kenny revealed that he has a fair idea how his team will line up over the coming months, especially for that play-off in Bratislava.

Having forensically analysed each of Ireland's games in the campaign up to this point, it is obvious where the team's issues lie. Seven goals in eight fixtures is hardly an eye-catching return.

Kenny said that this was something that had to change. He also hinted that little blame could be placed on the forward players for this, as even though they have not been finding the back of the net, the chances were never really provided for them in the first place.

We struggled to score goals. Pukki qualified Finland with 10 goals and we scored only seven. Take Gibraltar out, and two of the four goals came from two defenders, Doherty and Duffy.

They didn’t miss a chance. We just didn’t create enough for them, didn’t look like scoring goals.

On the other hand, he did sing the praises of the defence. The former Dundalk boss said this was the part of the team that was really functioning to a high level, with few changes being required in that department as a result.

This may come as bad news to those who have been yearning for Ireland to deploy a three-man defence, one which would see Enda Stevens and Matt Doherty play in the same positions they do at club level, and would also allow the Wolves man to coexist in the same team as Seamus Coleman.

Kenny admitted there was much to be said for attempting to fit all our best players in the same team, but time constraints made such a switch incredibly difficult. Expect no end to the Doherty versus Coleman debates for another few months at least. 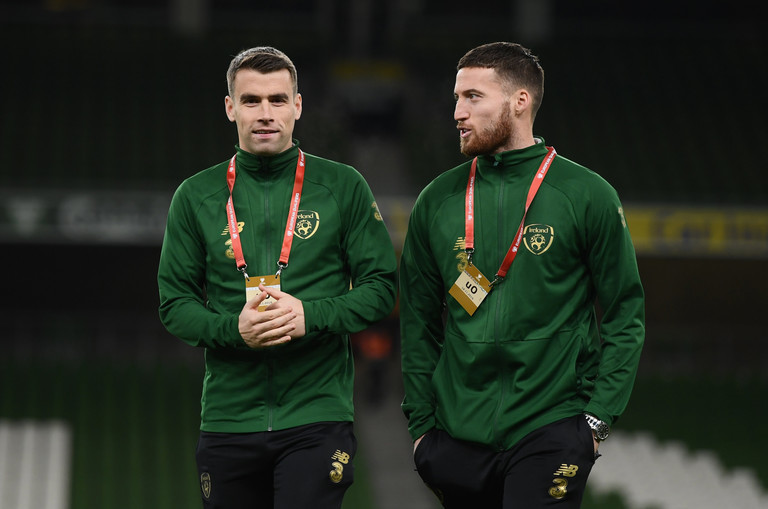 The short-term goal is to qualify for Euro 2020. Kenny admitted he would not be 'too experimental' right away as a result. Of course, his appointment was not only about the next couple of years. For the first time in many years, there seems to be a long-term thinking within the FAI.

The latest example of that with Kenny being given a seat on the organisation's executive board, something that will allow him to influence that decisions made within the FAI.

He wants to ensure that football is at the centre of every decision made, something that has not always been the case. Cuts have been made in important areas, sometimes with hugely detrimental effects.

Football needs to be at the centre of the decision-making process, particularly with the international teams at all levels...

It’s important, because of austerity at the FAI over the last number of years, some of the international teams at underage level may not have been resourced in the ways they might have wanted.

That has a knock-on effect, as it affects how they do in qualifying for tournaments and how players come through.

We haven’t seen players come through. We have Jeff Hendrick and Robbie Brady at 28 who have come through, and nobody for nine years until Aaron Connolly came through, aside from the two Cork City players, Alan Browne and Sean Maguire.

We haven’t had players through. I’m talking about competitive games, not friendly games. We have a lot of players with potential, we have to work with them to realise that potential.

That issue hasn't stopped at senior level either.

Far too often in recent years have we failed to maximise the playing resources at our disposal. Whereas other countries can identify and nurture talents early on, we seem to ignore certain players until they break through that glass ceiling. 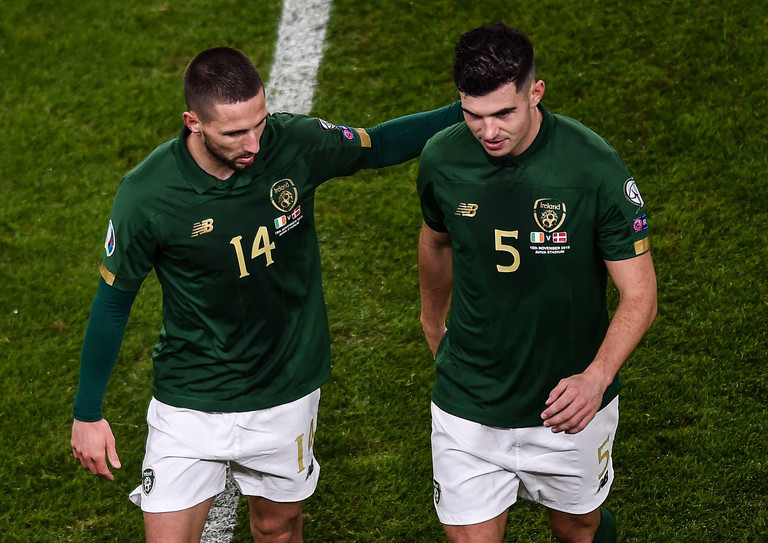 This has resulted in some missed opportunities on both an individual and team basis. John Egan, a player who has shown his immense talent in the Premier League this season, has three competitive starts for his country at the age of 27. Matt Doherty is in a similar position.

We need to identify players earlier, and understand the talent they have and the way we want to play.

It’s been well-documented we have players like John Egan and Matt Doherty who are 28 now, and they’ve only played three matches each.

They’ve been good enough for quite a few years. They are terrific players. John Egan went for 4 million three-and-a-half years ago to Brentford, he was probably ready then.

We have some good players with potential, but that’s all it is. We have to try and make them part of a successful senior international team.

If there is one thing we can be certain of in the Stephen Kenny era, it's that everything will be done to ensure no stone is left unturned in producing the best players for Ireland.

Hopefully, the results on the pitch will soon follow.