Callum Robinson will steal most of the headlines after tonight's win over Qatar and rightly so. It's not often we see an Ireland player score a hat-trick at international.

However, perhaps the most notable performance in the game came from Jeff Hendrick.

The Newcastle midfielder is a player who has flattered to deceive during much of his Ireland career, one who could never quite recapture the form he produced at Euro 2016. He just seemed to fade out of games, something that was so frustrating when you knew he had the ability to offer a lot more.

Under Stephen Kenny, he has been steadily improving, really coming to the fore tonight.

This was Hendrick's best performance for his country since that tournament in France. He was exemplary both on and off the ball, producing some wonderful touches and showed a real eye for a pass.

His assist for Callum Robinson's third goal was brilliant, one that perfectly encapsulated his showing on the night

What has changed for the midfielder over the last few months? Much of it may be down to confidence and being given the green light to play football.

Speaking to the media after the game, Stephen Kenny summed up just how dramatic Hendrick's uptick in form has been.

It really is dramatic.  Jeff went through a period when things weren't really happening for him.

He has every attribute. Like, he was absolutely outstanding tonight. It was a complete all-around performance in every facet of his play, his energy around the park, his vision, his first touch, his understanding of his role in the team.

He definitely benefitted from the space of only playing two in midfield and the three wide players. It really suits him that position.

That is one of the best games I have ever seen him play, to be honest. I thought he was really exceptional.

Here's hoping that it can continue moving into the future. 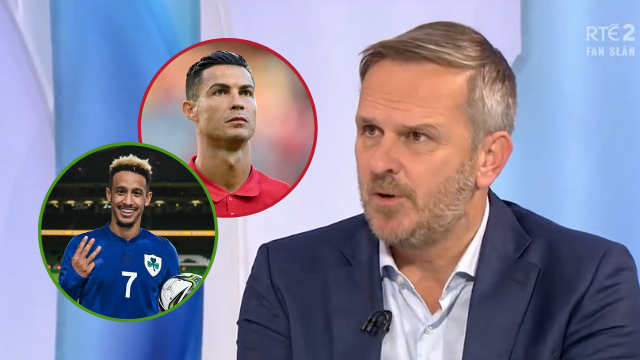 Football
3 weeks ago
By Balls Team
Here's The Last Irish Football International From Every County In The Country
Football
3 months ago
By Jonathan Byrne
Has Jeff Hendrick Finally Found The Right Manager After Five Years?
Previous Next

Football
2 weeks ago
By Gary Connaughton
5 Irish Players That Need A Move This Month
Football
3 weeks ago
By Balls Team
Here's The Last Irish Football International From Every County In The Country
Football
3 months ago
By Jonathan Byrne
Has Jeff Hendrick Finally Found The Right Manager After Five Years?
Popular on Balls
Basketball
7 hours ago
By Eoin Harrington
Kieran Donaghy And Tralee Warriors Claim National Basketball Cup Title In Tallaght
Rugby
7 hours ago
By Colman Stanley
Michael Lowry Backs Up Farrell's Faith In Him With Superb Display For Ulster
Rugby
11 hours ago
By Colman Stanley
Jimmy O'Brien Announced His Arrival On The Biggest Stage This Afternoon
GAA
11 hours ago
By Eoin Harrington
Watch: Outrageous Score Helps Ardscoil Rís To Dr Harty Cup Victory