After First Press Conference, It's Obvious Stephen Kenny Is A Big Fan Of John Egan

Stephen Kenny's first press conference as Ireland manager was not your standard introduction. Typically, the first media appearance from a new Ireland boss brings plenty of excitement, with a packed room at the Aviva Stadium or some other venue for the unveiling.

Of course, that wasn't possible in the current circumstances. Instead, it was a group of journalists huddled around their laptops for a conference call. Not your typical unveiling.

Then again, it is hoped that Stephen Kenny won't be your typical Irish manager.

From the 40 minute or so he spent speaking to the press, it was easy to gather that he will approach this job in a different manner to some of his predecessors. It is clear he has a vision for what this he wants this team to be, even if he didn't want to get bogged down in the specifics.

What would define success for him in his time as Ireland manager? It's a difficult question to answer, but a huge part of it will be making the nation be proud of their team once again:

I will ensure that I have conviction in the way I set the team up. Our ambition will be to dominate possession, and in a lot of the games we can’t promise we will always achieve that.

But I want people to come to the Aviva Stadium and look forward to going and watching this team. Ideally I would want every schoolboy team looking at the senior international team and thinking ‘that’s how we want to play’.

That’s what I would want.

The building blocks are there to achieve that.

There is no shortage of talented youngsters coming through, but there is also some quality players already in the senior ranks.

Most Ireland managers attempted to build their teams around the back four. Stephen Kenny said he will be no different. However, he seems more focused on what they can do to give the team an attacking platform, rather than just keeping the opposition at bay.

He believes that one man in particular could be a game-changer, but the former Dundalk boss said that he wants to extract every bit he can from each member of the squad.

We’ve also got a lot of quality within our senior squad as well at the moment. Our back four have been very consistent.

That gives a great dimension with raiding fullbacks. With the composition of the back four it gives you a great platform to go and build the rest.

I think we have a lot of talented players. Some players it’s difficult to know why someone like Robbie Brady, who three years ago was probably our most creative player, and now at times hasn’t got into the 22. How has that happened?

My job is to try and unlock the potential of the whole team. That’s what I see as my job. I’m really excited by it, and hugely honoured to be given the opportunity to do that.

It really is the ultimate honour that you could have. I must admit that it’s a huge privilege. 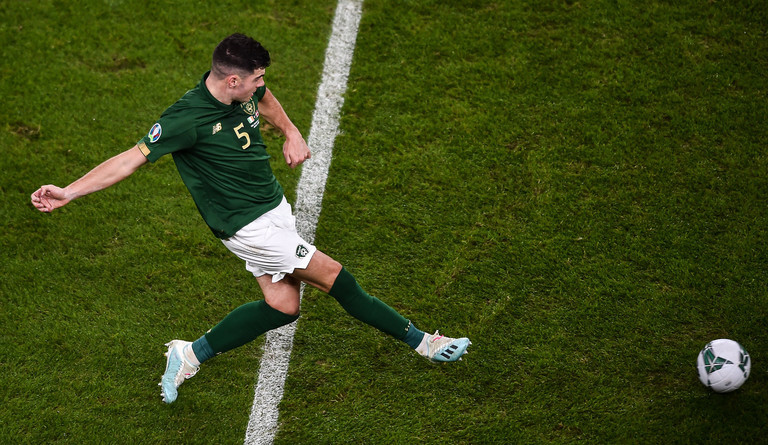 To say that Egan could have that such an impact is high praise. After all, he has only started three competitive games for Ireland.

Then again, perhaps that is what has held Ireland back. When you have Egan, a player of immense quality, who is only breaking into the team at 27-years old, something is wrong.

The same can be said of Matt Doherty. Clearly, such talents need to be utilised.

When it comes to the Wolves man, Kenny did not want to get into the Doherty vs Coleman debate. He believes that despite them playing the same position, there is no excuse for not having Doherty in the team somewhere.

Going forward, he will do everything he can not to squander the early years of a player's international career.

Matt Doherty, for example, is 28 and John Egan is 27. Matt Doherty has two competitive starts for Ireland, and John Egan has two-and-a-half, because he came off at halftime against Denmark.

With Matt Doherty, it's not been a Matt Doherty-Seamus Coleman battle because Doherty can play left back, right back, has played in advanced positions as well. Other players have played in those positions ahead of Matt.

Expect to see fewer debates about in-form players being ignored at international level going forward. Stephen Kenny will look to put the best players on the pitch whenever possible.