It must be so frustrating for Stephen Kenny as Ireland manager.

Lady luck has very much abandoned him during his near 12 months in charge, with injuries and covid related issues plaguing the team throughout 2020. That has hardly stopped since the turn of the year, with a number of key players ruled out for the current international break.

Even when things are going reasonably well on the pitch, Murphy's law seems to come into play.

Ireland's performance against Serbia tonight was a good one. They defended well, played the ball around nicely, and caused problems for the opposition.

They just also happened to concede a couple of very poor goals, ones which came down to individual errors.

Stepping into a World Cup qualifier against a side of Serbia's quality for your competitive debut is certainly no easy task, but Mark Travers did not have his best game tonight. His error for the second goal was the crucial one, with this putting the home side in place to go on and win the game.

Ireland could have had a penalty themselves only a few minutes before that. Aaron Connolly looked to have been brought down in the box by the Serbian defender and it would have been a very different game had the referee pointed to the spot.

Was that a foul on Aaron Connolly?

Speaking in his post-match press conference, Stephen Kenny said his side would not have lost the game had they been given what he described as a 'blatant' spot kick. He also backed Mark Travers to bounce back from a difficult night.

We've watched (the penalty incident) back and Aaron has touched the away and the centre back has fouled him. That's a penalty to go 2-1 up, and we're not losing the game at 2-1 up in the second half that's for sure.

We're not saying we definitely would have won it, but I don't see us losing it. It was a very critical moment in the game.

The second goal is a disappointing goal, we know that. Then the third goal and we're wondering how we're 3-1 down...

Mark is an excellent young goalkeeper. He's a really good goalkeeper. He hasn't been playing recently at Bournemouth but he has a great future ahead of him.

He couldn't have done anything really about the first or third goals. Overall I think he has a really bright future ahead of him.

One changing point in the game seemed to be the substitution of Jayson Molumby.

The 21-year old provided some much needed energy in the middle third, hassling and harrying the Serbian midfielders when they were in possession. Jeff Hendrick failed to have the same impact after his introduction.

Overall, the switch to 3-5-2 worked well for Ireland. Were it not for a couple of errors and Serbia's extra bit of quality, the result could well have been different.

Stephen Kenny said he brought off Molumby due to a need for fresh legs in midfield, while also praising the impact of Seamus Coleman in the new system.

He's (Molumby) not been a regular in the Preston team for a while, he's been in and out. I thought Jayson was excellent. He was just running out of steam to be honest.

Jeff [Hendrick] gave us fresh legs in that period which I felt would be important.

Jayson and Josh [Cullen] did very well, it must be said, alongside Alan Browne in the midfield overall. They performed very well...

We're disappointed. We lost the game, but overall I thought (the new formation) worked quite well. Seamus Coleman was brilliant at the back, marshalled the defence really well.

The midfield were brave, Josh Cullen and Jayson Molumby were taking the ball in very tight areas on the half turn and were comfortable doing that.

Alan Browne makes brilliant runs, and him behind the front two were a threat all night. I know it does suit our players.

Another unfortunate night for Ireland, even if they did end that long goal drought.

All eyes will now be on Luxembourg's visit to Dublin on Saturday. 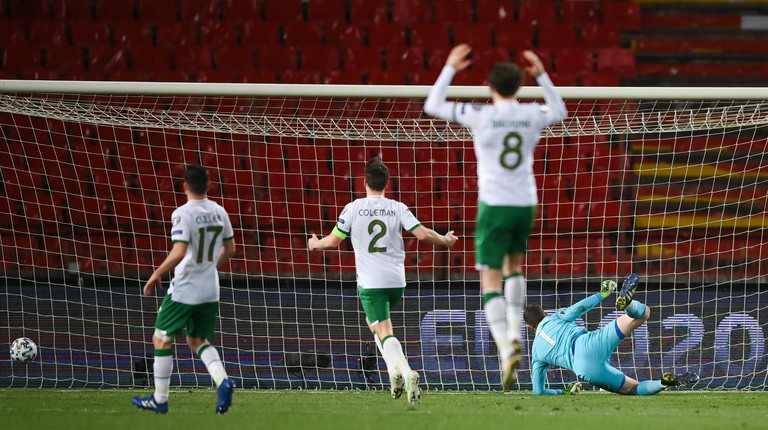