Ireland were desperately unlucky not to get anything out of their World Cup qualifier with Portugal on Wednesday night - and manager Stephen Kenny was not happy with some of the refereeing decisions.

There were plenty of contentious moments throughout the game, and Kenny was not slow to ask questions in his post-match interview with RTÉ.

The crushing late defeat leaves Kenny continuing to wait for his first competitive win as Ireland manager, but it could have been so different for them on the Algarve.

The officiating of Slovenian referee Jure Praprotnik was under the spotlight from Irish fans and pundits during the game, and Stephen Kenny was quizzed on his performance in his post-match interview.

🇵🇹 2-1 🇮🇪
Ireland manager Stephen Kenny says Portugal are a brilliant team but questions some of the officials' decisions. 'The players have been heroic. It's a tough one to lose.'
📱 Report: https://t.co/uSppZEqGtK#PORIRL #WorldCup2022 #COYBIG pic.twitter.com/cz93hTXEbC

The referee's decision to play past the five minutes of injury time in the second half drew particular criticism, but Stephen Kenny instead slammed the fourth official for seemingly preventing Ireland from making two substitutions.

They're a brilliant team. I just can't see how they miss the chance and he's given a free kick right at the end, just before the goal.

We were only a minute away from probably what would have been the best victory in Ireland's qualification history away from home. We're absolutely gutted, I'm just gutted for the players.

And the fourth official couldn't get a sub on in the match, he was completely unhelpful. I think it's terrible, the amount of time trying to get a substitute on. We were trying to get two subs on for five minutes before they scored.

The other refereeing flashpoint came in the first half, with a penalty awarded to Portugal after minimal contact between Jeff Hendrick and Bruno Fernandes. The referee upheld the penalty decision after a VAR review - and chose not to send off Cristiano Ronaldo for a strike on Dara O'Shea.

Kenny said he had not seen the incident between Ronaldo and O'Shea, but nonetheless said that the result had been "taken away" from Ireland, as he sought to push attention towards Saturday's game with Azerbaijan.

The players were brilliant, Portugal are brilliant, an exceptional team - we know that. They've got world class players. We're on a journey, it was soon for us to win away tonight but when you get the opportunity you have to grasp it.

It was taken away from us. It's been taken from us and the players deserved better. They put two unbelievable away performances in in Serbia and here, so we have to look to improve and dust ourselves down and get ready for the weekend.

It was a tough pill to swallow for Irish fans against Portugal, and the questions about refereeing will echo for the coming days - but Stephen Kenny and his team have to dust themselves off quickly. They take on Azerbaijan in Dublin on Saturday evening, before a clash with Serbia on Tuesday night.

The wait for a competitive win has now stretched to two years for Ireland. We can live in hope it won't go on for too long - on the evidence of tonight's performance, it shouldn't. 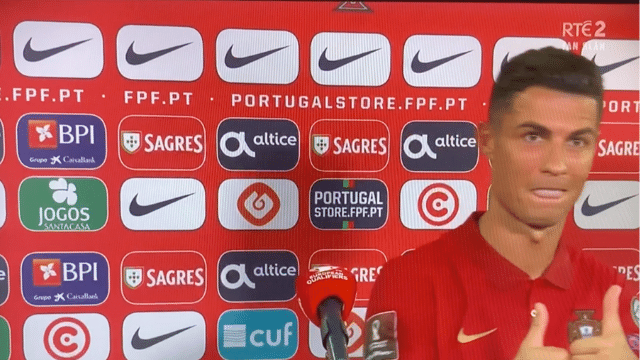