"It Hasn't Happened, Has It?" Steve Bruce Not Happy With Manager Speculation

Newcastle United manager Steve Bruce gave a press conference ahead of The Magpies welcome of Tottenham on Sunday.

Since the last team he spoke to the media, Newcastle have changed ownership. Now run by a Saudi Arabian based consortium, many have speculated about his future.

The takeover involved a sum of just over €360 million changing hands, making the Geordies a financial powerhouse unrivalled even by Manchester City's ownership.

Many of the headlines involved the human rights aspect and how the consortium had ties to the Saudi Arabian government.

A lot of speculation began to grow about Bruce's future and if he was the right man for the job going forward, given Newcastle are in a relegation battle early on.

Steve Bruce addresses the media for the first time since the #NUFC takeover. pic.twitter.com/h0PnKyUIWl

"I hope you're feeling the heat from your bosses, because it hasn't happened has it - what you all wanted," Bruce said.

"Let's hope you're getting a bit of stick from the people who put you in charge. The information was wrong, wasn't it? So you haven't done your job properly."

Bruce, 60, was clearly fired up and had his reasons. Many bookies are taking odds on possible Newcastle United managers despite not being relieved of his duties.

"It's been difficult, of course, but I hope you guys are getting a slap now from your bosses to say that you haven't done your job," he said.

"Whoever your source was, whoever it was who was feeding you didn't get it right, so I hope you're feeling a bit of heat."

Two mid-table finishes of eleventh and twelfth are nothing to be shunned by, especially given the onerous tenure of former club owner Mike Ashley.

🎙 Steve Bruce speaks to the media ahead of #NEWTOT on Sunday.

"I have to say they [Amanda Staveley and Mehrdad Ghodoussi] are very, very good people. It was good to see them around the training ground. If the takeover takes this great club forward then great." pic.twitter.com/czjyzRfLGR

Bruce thinks he could still have a shot at staying at St James' Park for awhile yet. "Who wouldn't want to try? I'm not going to give up the hope of it," he said in his press conference.

"Certainly I would and I'm sure there are hundreds who'd want to do the same thing. There are exciting times ahead for the club, that's for sure."

The former Manchester United great made reference to the importance of getting a win on Sunday, and the new ownership storyline not all being about him.

Business mogul Amanda Staveley has helped oversee the Saudi Arabian takeover and said in a club statement they were happy to let him focus on preparing for the match.

"If we make any changes going forward, Steve will be the first to know but, in the meantime, we wish him the best of luck in his 1,000th match as a manager," she said. 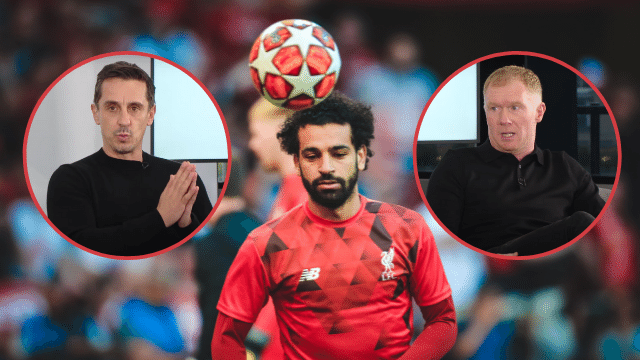 Football
1 week ago
By Eoin Harrington
Alan Shearer Says Roy Keane "Ran Away" From Him After Famous Clash
Football
2 months ago
By Eoin Harrington
Watch: Christian Eriksen Makes Heroic Return To Football For Brentford
Football
3 months ago
By PJ Browne
'Crazy Birthday' For Jeff Hendrick As Ireland Midfielder Makes Loan Move
Popular on Balls
Golf
3 days ago
By Gary Connaughton
Padraig Harrington Glad He Didn't Have To 'Make A Decision' On Saudi Golf League
Rugby
1 day ago
By PJ Browne
The Last Munster Team To Win Silverware: Where Are They Now?
Football
4 days ago
By Gary Connaughton
Darron Gibson Was Often Mocked By United Teammates Over Bobby Charlton Advice
Football
1 day ago
By Gary Connaughton
Paul Merson Feels Liverpool's Season Can't Be A Success If They Don't Win The League