Steve Bruce: My Family Think I’m Sick For Refusing To Walk Away

The 60-year-old is frustrated that the club cannot fight at the top of the league.

Steve Bruce has admitted his family think he is “sick” for refusing to walk away from the task of dragging Newcastle out of the Premier League doldrums.

The 60-year-old was thrust into the midst of a storm on Tyneside when he was controversially appointed as Rafael Benitez’s replacement in July 2019, and has seen his doubters only increase in volume despite the Magpies successfully negotiating two battles against relegation.

A summer transfer window during which £25million midfielder Joe Willock was the only acquisition, much to Bruce’s disappointment, and a winless start to the new campaign have simply increased the pressure.

However, asked about his situation as he prepared his team for Friday night’s league clash with Leeds, a defiant Bruce said: “My family think I’m a bit sick because I never really think about those things when you’re up against it.

“I know for a lot of people – and there’s the frustration – we should be better than that. That’s where we are at the moment and we have been for a while, and that’s everybody’s frustration.

“I want Newcastle to be at the top of the league, so that frustration is there. But I don’t think about, ‘Oh, the noise is too bad, walk away, Steve’. That’s not in my nature when it gets tough.”

Asked if he would walk away if his presence started to affect the team, Bruce added: “Well, then you start looking at yourself, of course.

“But knowing the way I am, it’s not in my nature to walk away from something when we’re in a fight. ‘Oh, it’s too difficult so I’m going to walk away’, that doesn’t really register with me.”

Much of the supporters’ frustration is aimed at owner Mike Ashley, whose efforts to sell Newcastle to a Saudi Arabian-backed consortium have become ensnared in a legal battle which shows few signs of being resolved in the near future, and his unwillingness to sanction further major spending.

As the public face of the business, Bruce tends to bear the brunt of that anger – former Magpies striker Alan Shearer and Match of the Day pundit described the club as “hollow” and “empty” – although he shares some of the same concerns.

“It’s not possible, so, I have to accept it and get on with my job as best as I can.”

SEE ALSO: Patrice Evra And Jamie Redknapp Visit Kerry For 'League Of Their Own' 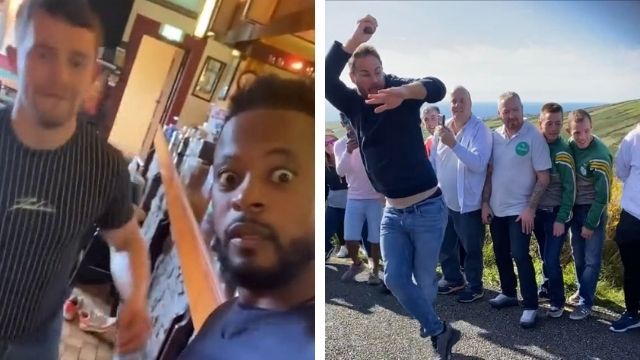 Football
1 month ago
By Gary Connaughton
Alan Shearer Went In On Ciaran Clark On Match Of The Day Last Night
Football
2 months ago
By Gary Connaughton
Alan Shearer Reveals He Gave Warning To Steve Bruce Before Taking Newcastle Job
Football
2 months ago
By Gary Connaughton
Alan Shearer Reveals Post-Match Roy Keane Confrontation After Infamous Red Card
Popular on Balls
GAA
2 days ago
By PJ Browne
Insane Drama As Late TJ Reid Goal Sends Ballyhale Into All-Ireland Final
Rugby
1 day ago
By Colman Stanley
Yesterday Was Not The First Time Wayne Barnes Sent A Player Off For Getting Lippy
Rugby
22 hours ago
By Colman Stanley
Champions Cup Predictions And Permutations For The Irish Provinces
The Rewind
2 days ago
By Jonathan Byrne
The Definitive Ranking: Deli Items Ranked From Best To Worst