Steven Gerrard Left Disappointed At Rangers Not Getting FIFTH Penalty

Is this man bantering?

Steven Gerrard's Rangers side went up against bottom of the table St. Mirren at Ibrox yesterday, and cruised to what on paper might look like a pretty standard 4-0 victory, closing the gap on leaders Celtic to three points ahead of the Hoops game with St. Johnstone this lunchtime.

What a mere glance at the result fails to tell us, is the absolutely freak set of circumstances in which the Gers overcame their opponents.

The home side were awarded four - that's FOUR - penalties in yesterday's encounter, with captain James Tavernier scoring two and missing one before Jermain Defoe tucked one away from 12 yards. Ryan Kent completed the rout with a beautiful little dink ten minutes from time.

But post-match, the Blues manager and European Cup-winning captain, was left aggrieved by the first-half decision by referee Andrew Dallas, not to award Alfredo Morelos another spot kick.

We feel as if the officials have missed a clear one on Alfredo. Some you get, some you don't.

Some you get, some you don't is right Stevie. Like your third of the day for instance - awarded when Greg Tansey blocked down Tavernier's attempted cross with a strangely placed arm, all of two yards OUTSIDE the penalty box. 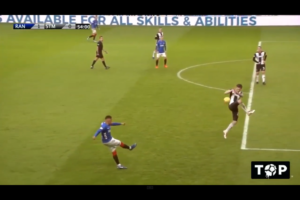 It was a refereeing performance that had Buddies manager Oran Kearney frustrated.

The former Coleraine gaffer claimed after the match that only one of the penalties should have been given.

There was only one penalty in the game and that’s the first one. Having watched them back, there is one definite penalty and three that aren’t.

But if the Northern Irishman was at least a little bit pragmatic in the face of perceived injustice, the same can't be said for the Paisley outfit's chairman Stewart Gilmour, who launched a scathing attack on Dallas and the SFA.

Could not believe what I watched today, how can somebody referee so badly and stay on the Grade one list?
I saw someone asked if observers there from SFA, yes 2, both finding it quite amusing, I was behind them!!
Is not amusing it is sad, that is the best we can produce 🥴

In Scotland we have a problem with the standard, however it will never be solved as the SFA will not admit there is a problem and try to rectify it, rather sad attitude to the situation. If you have a problem address it, do not hide from it 😔

Ironically, Celtic have been denied what looked a definite penalty in the first half at McDiarmid Park, when Ollie Burke was scythed down with the goal at his mercy.

Football
1 month ago
By Balls Team
Report: Alfredo Morelos On Verge Of Leaving Rangers
Previous Next