Steven Gerrard has defended Rangers striker Alfredo Morelos after his player was involved in another controversial incident this afternoon.

Rangers kept their excellent run of recent form going with a 2-1 at Dundee United, maintaining their 13-point lead over Celtic at the top of the league.

However, many felt Morelos should have seen red in the 12th minute of the game for an apparent elbow on opponent Mark Connolly. The referee spotted the incident at the time but deemed it as a yellow card offence.

You Will not win leagues with players like #Morelos WTF are you doing man who have another 80mins to go #Rangers pic.twitter.com/xPi5hxr85R

It may look like a fairly obvious elbow once you view the footage of the incident, with even Ally McCoist labelling it as 'crazy'. However, Gerrard disagrees.

Speaking after the game, he said that it was nothing cynical from Morelos and that the yellow card was a just punishment. He would go on to back his forward to end his recent barren run.

Why would I speak to him about that?

I didn’t see an elbow. If you look at him again, there’s no elbow there. The referee saw it and dealt with it.

It was a foul and a yellow card and it’s been dealt with. But if you look at it again, next time I see you you’ll say it wasn’t an elbow...

These things happen. He’s not the first centre-forward that this has happened to.

They have moments and phases where they are not in top form. He is working hard, he’s doing a job for the team. His all-round play is good, he’s just maybe lacking that wee bit of confidence in front of goal.

Of course, Morelos has not been adverse to some controversial incidents during his time in Glasgow, so it can be difficult to give him the benefit of the doubt on this occasion.

SEE ALSO: Shane Duffy Back On Form With Trademark Header In Celtic Win 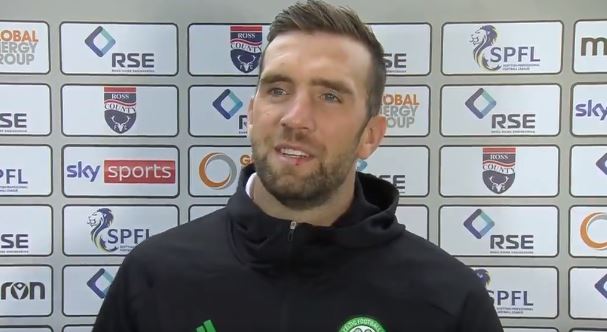