Rangers retained their place at the top of the Scottish Premiership yesterday, with an Alfredo Morelos winner 12 minutes from the final whistle enough to earn a 2-1 win over Hibernian at Ibrox.

It was a game in which the home side for the majority, with Kevin Nisbet giving Hibs the lead in the eighth minute. However, they would be forced to play the last hour of the contest with ten men after Ryan Porteous received a straight red card for this challenge on Joe Aribo.

Here's the Ryan Porteous red card for those who haven't seen it.

Really weird one - looks alright from the first few angles then awful from another. pic.twitter.com/j0dwcH15Ru

While there was minimal contact, it was a reckless challenge that could have done serious damage had it made contact.

Speaking to Sky Sports after the game, Rangers boss Steven Gerrard had little sympathy for Porteous as this was the second time he had produced such a tackle against his side in recent times, although he said he hoped the player learned from his mistakes.

🗣️"It is a wild tackle - a leg-breaking tackle. It is the second time he's done it against us - the kid is obviously not learning."

Steven Gerrard discusses Ryan Porteous' red card & the 2-1 win over Hibs that moves Rangers top of the table. What did you make of it? pic.twitter.com/TFNZFPu6xK

I know one or two things about bad tackles because I have made a few myself, so I am not in a glass house here.

It's a wild tackle. It's a leg-breaking tackle if he catches him. The kid only has to play the ball.

I don't know why there is any reason that he wants to go in with that intent and it is the second time that he has done it against us because he done it against Lassana Coulibaly not so long ago.

So the kid is obviously not learning and he has let his manager and his team-mates down today.

There is no defending a tackle like that because the speed of it, the height of it and the force doesn't belong on a football pitch.

I have had to learn over the years myself as a player to learn from those types of moments of madness. So hopefully the kid learns.

Rangers have a one point lead at the top of the league heading into the international break, although rivals Celtic sit six points adrift as things stand. 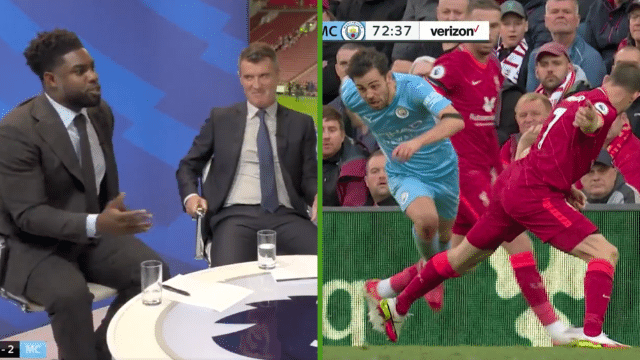 Football
10 months ago
By Sean Meehan
New Hibs Signing Has One Of The Best Simpsons Tattoos We've Seen
Football
1 year ago
By Conor Byrne
Gerrard And Ross Fume Over Bottle Throwing During Hibs Vs Rangers
Football
2 years ago
By Maurice Brosnan
Watch: Superb Daryl Horgan Scores Twice To Power Hibs Into Scottish Cup Last 16
Previous Next

Football
10 months ago
By Sean Meehan
New Hibs Signing Has One Of The Best Simpsons Tattoos We've Seen
Football
1 year ago
By Conor Byrne
Gerrard And Ross Fume Over Bottle Throwing During Hibs Vs Rangers
Football
2 years ago
By Maurice Brosnan
Watch: Superb Daryl Horgan Scores Twice To Power Hibs Into Scottish Cup Last 16
Popular on Balls
Football
3 days ago
By Colman Stanley
Alex Ferguson Names His Greatest Captain, And It's Not His Most Successful Captain
Rugby
3 days ago
By PJ Browne
Trevor Brennan's Sons Played In The Same Top 14 Game At The Weekend
Football
1 day ago
By Gary Connaughton
Frank Lampard Reveals Ruthless Nature Of His Sacking At Chelsea
The Rewind
2 days ago
By Colman Stanley
New On Netflix Ireland: Your Guide To December's New Additions