Neil Warnock and Jose Mourinho are two of football's most colourful characters. Both managers certainly do not care as to whether or not they are universally loved and are very much be results driven

Both managers were also giving out about the away dressing room at the Bet365 Stadium, Stoke City's home ground.

Warnock was fuming after Middlesbrough's 1-0 defeat against Stoke at the start of the month. He called their changing facilities an "absolute disgrace", saying that he'd wouldn't want to put animals in it.

The toilets were blocked up. We've got fumes coming in from the bloody engine outside the dressing room. Water everywhere on the floor. It's a disgrace for the Championship. Absolute disgrace.

Neil Warnock was fuming about the facilities at Stoke!

Mourinho's Tottenham side face Stoke tonight, though they look set to have a better dressing room, as the Championship club have upgraded their facilities, ahead of the game.

Mourinho claimed to have seen a video of the old dressing rooms, but he'll be pleased that it's been rectified.

🇵🇹Tottenham Hotspur boss José Mourinho has hinted at the state of the Stoke dressing room after Neil Warnock called it a 'pigsty':

Mourinho does love the mind games! He's up against Irish manager Michael O'Neill tonight. The former Northern Ireland manager took over Stoke in November 2019 when they were towards the bottom of the league, but he has them sitting just outside the play-offs at this stage of the season.

He's up against the Special One tonight, who can look forward to luxurious changing room treatment! 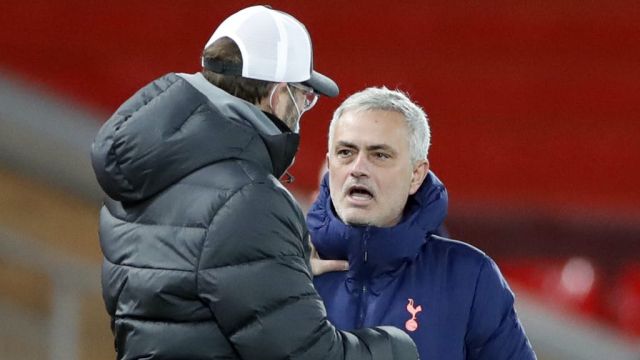 Football
2 months ago
By Jonathan Byrne
Quiz: Guess The Cup Final Penalty Shooutout Keepers Of Last 20 Years
Football
2 months ago
By Gary Connaughton
Jamie Redknapp Was Fuming Over Kepa Substitution Decision & Penalty Antics
Football
2 months ago
By Gary Connaughton
Jurgen Klopp Was Overjoyed That His Show Of Faith In Caoimhín Kelleher Paid Off
Popular on Balls
GAA
3 days ago
By PJ Browne
Mayo's Padraig O'Hora Using Football To Promote His Real Passion
Rugby
1 day ago
By Colman Stanley
'That Pace, That Intensity, That Organisation' All Black Legend Has High Praise For Leinster
GAA
1 day ago
By PJ Browne
Jim McGuinness's Gut Tells Him Dublin Will Win The All-Ireland
The Rewind
2 days ago
By Eoin Harrington
Watch: Brilliant Dermot Morgan Dublin Segment From 'The Travel Show' Resurfaces