Some Of The Stories From Alan McLoughlin's Book Are Ridiculously Entertaining 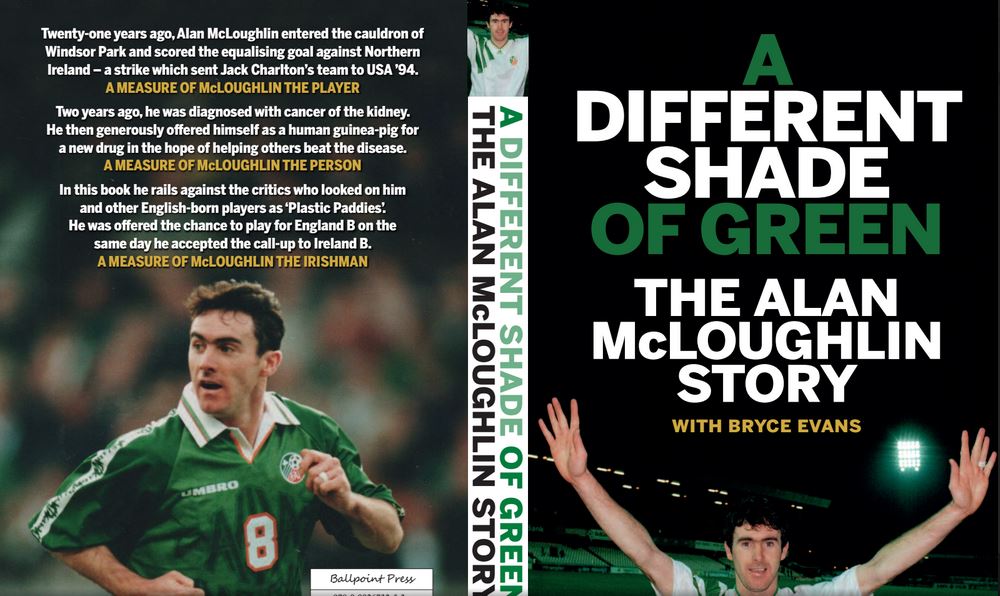 While Roy Keane's autobiography has hogged most of the headlines, another Irish footballer from the glorious 1990s has released his own book and judging from the extracts below it looks like an absolute riot.

Alan McLoughlin's book 'Different Shade of Green' has been shortlisted for the Irish Sports Book of the Year (shortlist here) alongside Roy Keane's effort.

Written with Bryce Evans, a historian at Liverpool Hope University, it contains some brilliant, often hilarious, stories from the Charlton era and discusses in depth the complexities and tensions involved in being an English born player togging out for Ireland.

McLoughlin, who was picked to play for both England and Ireland at youth level, but chose Ireland, writes of receiving threats from Combat 18, the scary scenes as the Irish team bus arrived at Windsor Park for the 1993 qualifier, and not receiving one word of support or a phone call from the FAI when he was diagnosed with cancer in 2007.

The book also covers the agony of Ireland's failure to qualify for Euro 2000, with a truly sickening last minute goal in Macedonia, which left McLoughlin devastated.

Here are some of our favourite extracts from a hugely entertaining book:

Preparing to play Holland in the Anfield Euro 96 Qualifier

It's the eve of Ireland's Euro 96 playoff game against Holland in Anfield. The team and management all gather in their private room in a Liverpool hotel to watch the swaggeringly gifted Dutch outfit. Jack plonks an old VHS tape in the slot and they all get ready  to watch.

To my surprise, as the camera scanned across the two teams standing for the anthems it showed eleven anonymous faces in orange shirts surrounded by an empty stadium. I squinted at the Dutch team on screen, unable to make out Kluivert, Bergkamp or any of their other stars. After five minutes it became abundantly clear to everyone that this was a video of the Dutch under-21 team. Everyone, that is, apart from Jack and Maurice. The lads started nudging each other, laughter rippling, as we waited for Jack to realise. Another five minutes passed.

Still Jack hadn’t clocked what was going on. Another few minutes passed. Up Jack leapt, pausing the video. He’s finally realised, I thought. But as Jack started lecturing us, I realised I was wrong.

Jack was pointing at the Dutch under-21 striker, who just happened, like Denis Bergkamp, to have blonde hair.

'Now watch the way he pulls away from his defender here'

'What the hell do you think you're laughing at? What's so fucking funny?'

Jack's question was met with more howls of delight. Eventually, Andy Townsend told him what had happened. Jack blamed Maurice and gave him a bollocking. Maurice, in turn, blamed the Dutch. Sabotage! Jack's final word on the matter was 'fuck 'em, we'll beat 'em anyway'. It didn't bode well.

Ireland faced Turkey in Istanbul in the final match of qualifying for Euro 92. While Ireland won the match 3-1, the Turks managed to intimidate the hell out of the Irish subs, who remained wedged to their bench all evening.

If you're a Catholic, they say, Windsor Park can be about as welcoming as the ninth circle of hell. Jack Charlton claimed he had never seen a more hostile atmosphere in all his playing or managing days, ‘not even in Turkey’. Actually, I’m not so sure about that; sitting on the bench in Istanbul in 1991 when Ireland’s third goal went in, we found bags of piss raining down on us from the irate crowd, followed shortly thereafter by a dead cat. Minutes later, Jack turned to the substitutes and told us to warm up! For the one and only time, in unison we told Jack to ‘fuck off’ and, with one upward glance to the deceased feline splattered all over the Perspex above us and the thousands of Turks making slit-throat gestures behind, Jack consented. I’m not sure if Jack remembered that detail when recalling the hostility in Belfast, but I’ll agree that Windsor Park that night was pretty nasty all-right.

Every so often Jack Charlton would produce the board game Trivial Pursuit and persuade his always-reluctant players to join him for a game. If you saw Jack approaching with the Trivial Pursuit box under his arm you had to make an exit sharpish or you’d find yourself struggling to answer obscure questions on literature or science while Jack impatiently demanded an answer. Then, after playing for a while Jack, perpetually restless, would himself lose patience and walk off right in the middle of the game.

Jack bumming cigarettes off the crowd

When it came to money he had another side too, of course, and that was his legendary love of ‘cadging’ free stuff from people, even cigarettes from the crowd during matches. I came across this first hand when, the day before a qualifier at Lansdowne Road, the squad went shopping in Dublin to relax. I bumped into Jack on Grafton Street. Jack is a big man but he was so laden with carrier bags full of stuff he was struggling a bit.

‘Looks like you could do with a new pair of trousers, Alan.’

And with that, Jack marched me into Louis Copeland gentleman’s outfitters, pompously announced that he was the famous Jack Charlton and that I was the famous Alan McDonald (Jack's mistake), and got me a beautifully tailored pair of trousers for free.