Luis Suarez was always destined to take centre stage on his return to Liverpool and so it proved as he clashed with several opponents during the Champions League second leg clash.

A battle well worth keeping an eye on 👀 pic.twitter.com/p42k35UY6x

"F*** off Suarez" rings out as he wins another free kick.

Robertson was removed at half-time after limping heavily throughout the first half. He was also involved in a clash with Suarez in which the Uruguayan seemed to make contact with his leg.

The Liverpool full-back was already limping before the incident and Suarez did make his way over as he received treatment. 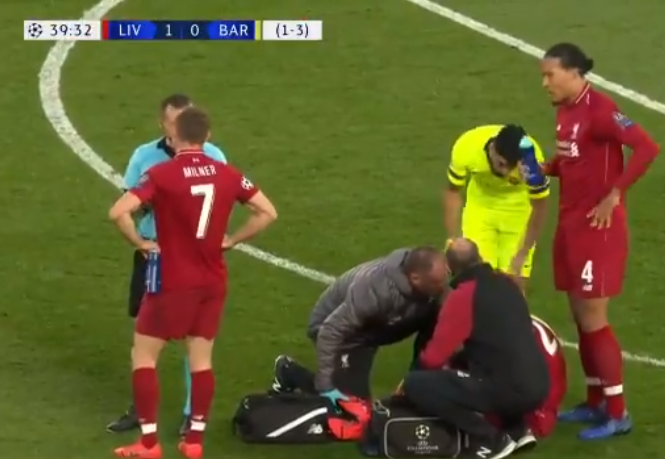 Speaking on RTE Sport, Liam Brady was critical of the altercation.

He's a wind-up merchant. In a game like this, you can not afford to lose your rag. Fabinho has lost it. This is an interesting one for me, it looks like Suarez kicked out deliberately there at Robinson. We've seen him bite like a horse, we've seen him kick now like a horse.

Here's that moment #Suarez kicked #Robertson in the ding-ding. Pretty sure that first kick was intentional as well. VAR completely snoring on that one.#Liverpool #FCBarcelona #LIVBAR #LFCBarca pic.twitter.com/b8834W0zwC

"This one is typical of Suarez," said Fowler. "He kicks out not once but twice."