The Sun Want Gary Lineker To Be Fired

The Sun newspaper want Gary Lineker to be slung "out on his ears" by the BBC.

With their trademark subtlety, their front page consists of a picture of Gary Lineker's mug and the words 'OUT ON HIS EARS' in capital letters.

Cutting edge humour as ever from the Sun. The guardians of taste are probably relieved that they didn't opt to make a pun out of his occasional propensity to defecate on football pitches instead.

Why are the Sun going after Gary Lineker?

Well, in his non-football pronouncements over the past few months, Lineker appears to have gone a bit bleeding heart liberal for the Sun's tastes.

For one thing, Lineker was crestfallen after the Brexit vote. He is one of those people that the Sun call "remoaners" and whom the Daily Express call "traitors".

Feel ashamed of my generation. We've let down our children and their children.

The Sun's views on the European Union and Brexit are well known. As a part of UK press landscape over the last 'however many' years, they played a invaluable role in educating the British electorate and helping them make an informed and intelligent decision last June. 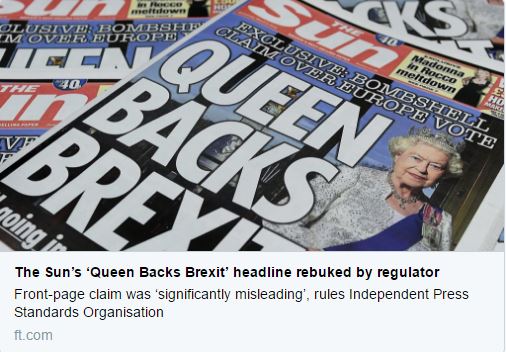 Now, the Sun are annoyed about Lineker's stance on the migrant issue. As part of a new deal, Britain is allowing in 400 children currently living in the so-called Jungle Camp in Calais.

Critics are questioning whether all of the refugees labelled as children are in fact children. Tory MP David TC Davies (that's "Davies" by the way and not the cabinet minister David Davis) wants the children's teeth to be checked so they can verify that they are in fact children.

Lineker is disgusted at those seeking to deny the refugees right of entry. He said the "I'm all-right Jack" was "hideously racist" and asked what was happening to Britain.

The treatment by some towards these young refugees is hideously racist and utterly heartless. What's happening to our country?

Well that tweet led to some serious blocking. The I'm alright Jack mentality is sickening.

A couple of Tory MPs have weighed in, including the aforementioned Mr. Davies.

“I hope he apologises. I question if the BBC should be employing him when he seems to be using his fame to push out his rather emotive and controversial views.”

Here are the views of Alec Shelbrooke MP.

“He needs to decide if he’s a political activist or BBC sports journalist — he can’t be both.”

His spokesman told the Sun - “He won’t be commenting, especially not to you.”

A few minutes ago, he tweeted this.

Good night all. Can't wait to do Match Of The Day on Saturday.

Read more: A Complete History Of League Of Ireland Clubs Versus Scottish Teams In Europe

Match of the Day gary lineker