There are two types of 5-4; the one described as a 'nine-goal thriller' on Match of the Day only to slightly disappoint in that one team gains an insurmountable lead before being pegged back late, and the utterly bonkers Swansea 5-4 Crystal Palace type, which in many ways defies description.

Unfortunately, describing it was exactly the task which befell one BBC employee yesterday evening.

'Live blogs' are one of the game's mysteries; who in their right mind would read minute-by-minute text commentary of a game in a world where you could probably watch that very game in the lense of your glasses? Admittedly, our knowledge of Google Glass' functionality is at best tenuous, but you get the drift. The fact is people (probably with jobs) do read live blogs in their droves, hence their success. And those who tuned into the Beebs' text coverage of Swansea's sensational victory over Palace, while missing the drama on the pitch, were treated to an absolute show by whoever was on match duty.

We pick up the action as Christian Benteke makes it 4-3 to Palace... 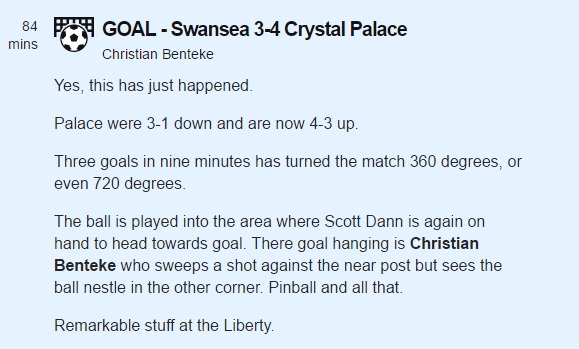 A standard reaction, perhaps, to what would surely be the final goal of the game.

But there was more... 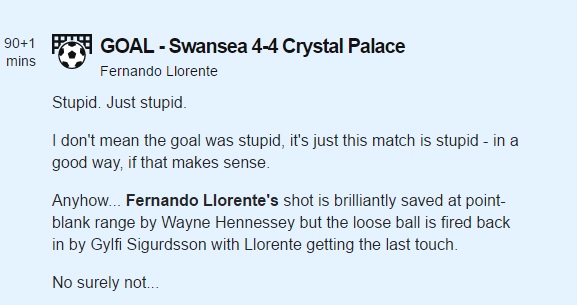 He or she knew it was coming.

Bedlam, in text form, as Fernando Llorente made it 5-4 to Bob Bradley's side, capping off a batshit mental game and condemning Palace to their sixth consecutive defeat in the process.

Fitting, too, that Llorente entered the fray and bagged two crucial late goals for the Welsh club. Here's what that same BBC text commentator had to say about the big Basque striker earlier in the fixture.

Meanwhile, over on Reddit Soccer, football fans waxed lyrical about their hero's efforts, and yearned for more organic commentary reactions than we've grown accustomed to.