10 of The Greatest Things About Aertel Page 220

With the sad news today that RTÉ's Aertel service will cease, we thought we'd republish this little tribute to the original Soccer Saturday. Farewell Aertel, you served us brilliantly!

In this world of instant news and unceasing gossip, forgive us for pining for the good 'oul reliable days of Aertel 220. You will not find IndyKalia here, nor will you have stories of odds dropping on a transfer or deadline day nonsense. Just cold hard news and results.

So join us as we count down the top ten greatest things about a page for the ages.

1. It mostly dispensed with Transfer gossip.

Aertel generally didn’t have the time or the space for your transfer gossip. It couldn’t care less about what agent a chairmen met, it thumbed its nose at a player issuing a come and get me plea. It delivered facts. Cold hard facts. Andy Cole signs for Manchester United. Alan Shearer signs for Newcastle. There is no need to invest any of your spare time in a transfer saga.

What else do you want to know?

2. There was no nonsense with goals.

3. You reloaded it when you were very excited.

4. In its own small way, it buzzed off of an Irish goalscorer.

Wolves 1-0 Sheffield United, R.Keane in green. Little analog fist pump. Just in case you forgot – that lad who scored is Irish. One wonders how they’d report a Jack Grealish goal.

None of your dedicated tactical blogs here, Aertel delivered a set amount of stories and it wasn’t arsed about ranking them. A Denis Irwin thigh strain is the same as a Robbie Fowler hat-trick and we’ve only got three paragraphs so make it snappy. 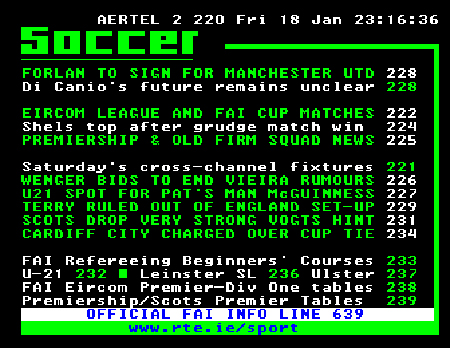 6. The all too rare in the moment updating.

There you are having one last look before bed when BANG! The screen flickers itself and a new fresh story about an Eddie McGoldrick hamstring injury elbows its way to the top. Magic.

7. You had to earn seeing the league table.

Keep your Google nonsense. Aertel delivered the league table in its own damn time. One page for all the divisions and you bloody well waited until it pops onto the league you wanted. Missed it? Tough.

Unless you had a fancy stop button on your remote of course.

You start on 100 and ignore the news headlines. You hit the magic numbers and your heart sinks as it winds up from 100 straight through to 220. The early nineties equivalent of hitting refesh on a youtube video.

Eventually as technology raced ahead, we no longer saw the numbers churn forward. And that was a sad day.

Yorkie knew they were on to a winner. At first, the lack of green was jarring but after a while we readjusted and for some reason ate a lot of Yorkies.

10. It was the only place on the planet where an FAI referee course was ranked higher than the Premier League table.

Away with you to Ceefax if you don’t like it, you fancy multi-channel owning chancer.