Luis Suarez has broken his silence to give the Guardian an "explosive" interview, he has also given The Telegraph a similarly titled interview. In both he confirms he is prepared to hand in a written transfer request to force his move to Arsenal. 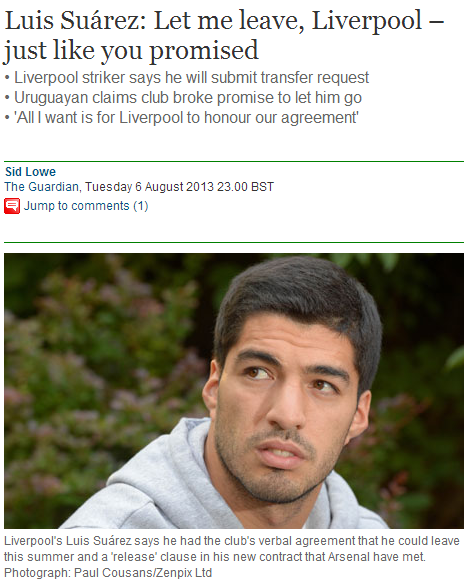 "People may accuse me of showing a lack of loyalty but last season we told Liverpool there was interest from a top European club but they told me: 'We've got a new coach and we're going to push for the Champions League.'

"I spoke with Brendan Rodgers several times and he told me: 'Stay another season, and you have my word if we don't make it then I will personally make sure that you can leave.'"

Now the story has changed. "Liverpool is a club with a reputation for doing things the right way," Suárez says. "I just want them to abide by the promises made last season. Some of [my team-mates] say to me: 'We cannot understand that if you have it signed that you can't leave.'"