The Balls.ie Team Of A Packed Footballing Weekend

Two FA Cup semi finals and six important games in the Premier League. It was a bumper weekend of sport in general, but a stacked footballing weekend. We've sifted our way through the stats and the completely pointless heat maps to find our best eleven from this weekend's action.

Presenting: The Balls.ie Team of the Weekend 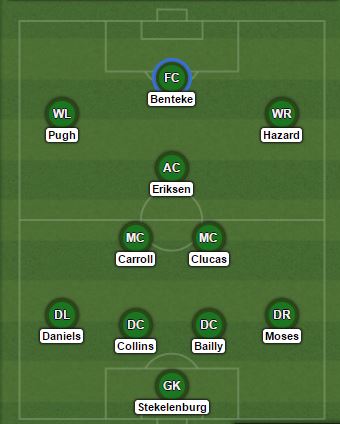 West Ham fired everything at Everton, including the kitchen sink, with no fewer than fifteen shots on the Toffees goal. Stekelenburg had to stand big to make three saves and batting away four crosses. Everton could still make the Europa League spots - if they want to - and Stekelenburg will help them there if he repeats these performances.

Bournemouth sent Middlesbrough closer to the relegation trapdoor and an immediate return to the Championship after a thumping 4-0 victory. Daniels had two tackles, two dispossessions, and drew Gaston Ramirez into a second yellow card. Oh, and he rounded off the scoring too with his third goal of the season.

West Ham could still be dragged into the dogfight down the bottom, but they helped their cause with a valuable home point against the form team in the division Everton. Collins won all of his aerial battles, had three tackles (including one to help prevent Romelu Lukaku from rampaging) and finished with an 84% pass success rate.

Burnley have been notoriously tricky to break down when at Turf Moor, with the Clarets already taking points off Liverpool, Everton and Chelsea. They couldn't break past a resolute United center back pairing of Bailly and Blind. The Ivorian had a 100% tackle success rate and won over half of his headers.

Moses has really transformed his game under Conte this season, and was a thorn down the Spurs wing all game. His charge forward led to Son's sloppy challenge for the second Chelsea goal and made three important tackles on Dele Alli.

Wow what a game and what a win! Chelsea fans are the best in the world thank you for your support ? #CFC pic.twitter.com/rhRTG5BumJ

More possessions than any of his team mates, four tackles and the game-sealing second goal. It wasn't a bad day for Swansea, and in particular Tom Carroll, as they dismantled a surprisingly poor Stoke side.

Unfortunately for the Swans, the side directly above them, Hull, also won. Sam Clucas followed up Lazar Markovic's opener with a stunning strike to seal three crucial points. Add to that his five tackles and 74% pass completion rate and he got a deserved man of the match. Marco Silva's home record since he took over is one of the main reasons Hull have managed to stay out of the bottom three - for now.

Massive 3 points today with 10 men showed great character. Also massive congrats to @LincolnCity_FC back in the league where they belong ⚽️

We told you earlier that Bournemouth's left wing was what won the game against Middlesbrough, and Pugh ran riot. Five take-ons, a goal and an assist earned him a place in our team of the week.

It can be argued that Christian Eriksen singlehandedly dragged Spurs back into Saturday's cup semifinal. Mauricio Pochettino's side were heading out at Wembley. Twice they went behind, twice Eriksen laid balls on a plate for Harry Kane and Dele Alli. Not enough in the end, but a good effort nonetheless.

CHRISTIAN ERIKSEN HAVE MY BABIES YOU SEXY DANISH BASTARD

The fact he now has more goals for away sides at Anfield than he does for Liverpool at Anfield says a lot about Benteke, but he tormented Dejan Lovren throughout the second half of Sunday's game and finished off with a brace.