Balls Remembers: The Wild And Abandoned 2001 Friendly Between Brighton And Longford Town

This is the story of one of the most absurd and controversial friendlies that may have ever taken place between a League of Ireland side and English club.

Typically, these games are drab and mundane affairs. Very little is ever at stake. Supporters often stay home. To put it bluntly, it never really matters.

But the friendly between Brighton and Hove Albion and Longford Town in 2001 was anything but that.

The game itself would last 44 minutes. It had three red cards, a walk-off, and a 40-man brawl involving both teams, managements, and even club officials. No wonder it was dubbed the ‘Battle of Longford’.

Some going for a friendly.

These days, Brighton has strong links to this island, which is incredible considering the club's disastrous visit to Ireland twenty years ago.

To offer some context, back in 2001, Brighton were by no means a club in the position they find themselves in today.

They had just come up from the Third Division under Mickey Adams, and their side possessed a young Bobby Zamora.

They were in Ireland that summer to play a few friendlies ahead of a season that began with genuine hopes of promotion to the old First Division [now Championship] in England.

Longford themselves were going through a purple patch in their own history.

They were managed by a future Ireland manager in Stephen Kenny, and a few months previous, they reached the FAI Cup final for the first time in their history.

Despite losing to eventual champions Bohemians, they qualified for the UEFA Cup for the first time ever as a result, and had an upcoming tie against Litex Lovech in the UEFA Cup to prepare for.

And they were also back in the top-flight of Irish football for the first time since the First Division was introduced during the mid-1980s.

A shiny new all-seater stadium was nearing its completion, and the club was gearing itself up for their first ever season in European competition.

Life was good in the Midlands.

'Ratty from the start' 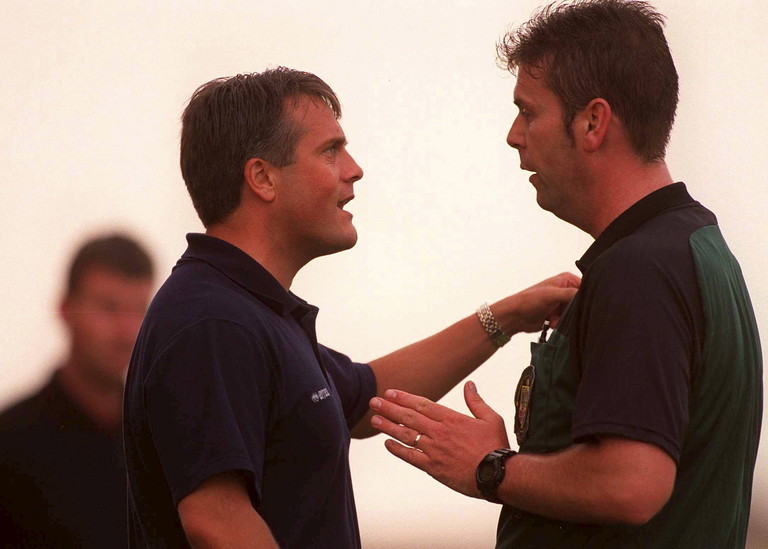 Brighton came into the friendly against Longford Town having lost a friendly to Sligo Rovers just days earlier by a goal to nil, setting  the tone for a manic encounter.

Tone was generally a referee in the junior ranks in the Leinster Senior League and only refereed the game due to usual National League referees attending a seminar on the day of the game.

According to those who played in the match, and the journalists who witnessed it like Paul Buttner of the Irish Times, it was a match laced with anger, aggression and genuine hate throughout its 44 minutes of action.

"They weren’t ready for it and they were ratty from the start," recalls Stuart Byrne, who played in the game for Longford Town.

I specifically remember some of the Brighton players roaring and shouting at each other [from the start].

It was completely out of the norm stuff. They pulled the plug and bottled it.

These English clubs came over at the time thinking these games were going to be a walk in the park. It wasn’t, and they didn’t like that.

I remember the game well. There were perfect conditions for a game and I remember us playing really well.

We were putting it up to them. I got the impression that they just didn’t like it.

Micky Adams was giving one of his players a lot of abuse, and that players head was gone. Alan Murphy, our right-back, was a nasty player and he got in his ear as well.

He’d always leave a foot in, and he definitely did a job on that lad. They nearly went to punches over the whole thing and they had to be separated.

Longford went up 1-0 in the second minute thanks to a Sean Prunty header, with chaos ensuing from very early on, typified when Eric Lavine collided with the Brighton goalkeeper shortly after.

After Brighton levelled the game through skipper Paul Rogers,  Adams was compelled to withdraw two players from the field of play as Matthew Wicks and Richard Carpenter almost came to blows in the middle of the pitch, as reported by Buttner.

But it was moments later, at the end of the half when things reached an entirely new level.

The tackle sparked a series of events that saw the game come to a rather abrupt end just before the half-time whistle.

In the 44th minute, Longford Town's Alan Murphy and Brighton's Charlie Oatway clashed, and both were sent off. Murphy protested his innocence at the time, while Oatway trodded off the field of play.

Longford's full-back gave up his fight to stay on the pitch, however, before heading towards the dressing rooms himself.

And what happened next is best explained by Stuart Byrne.

They lost the plot by then and there was this tension between Adams and his players. We were loving it and could turn the screw on them.

The referee sent sent Alan [Murphy] and their player off [Charlie Oatway] after the two clashed. A player was also sent off before that.

The Brighton player walked towards the hut where the dressing rooms were, while Alan hung around for a bit protesting.

That Brighton lad had stolen 50 or 60 yards on him to walk towards the hut where the dressing rooms were.

Alan was then jogging towards the dressing room but it looked like he was going off to run after him.

And then everyone made a beeline for that corner, they thought there was going to be murder!

Micky Adams then called his players off the pitch, and they bottled it. They should have played on. 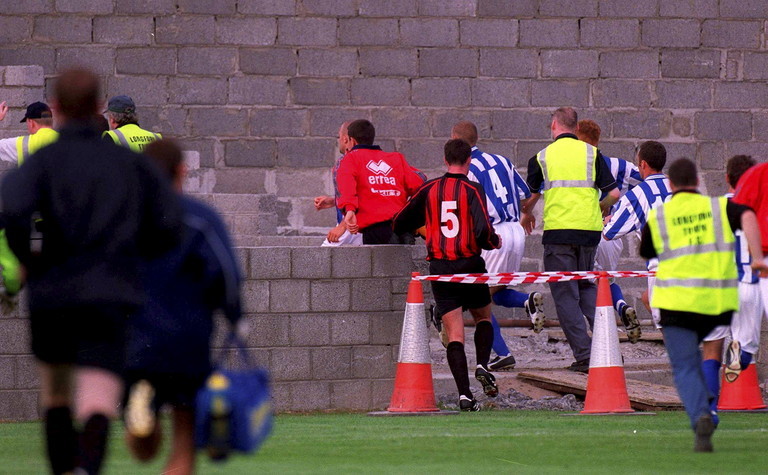 In the Irish Times, Buttner captured the tone of the match perfectly with two words: ‘needlessly agitated'.

"That type of thing doesn't happen in football in Ireland"

There were differing accounts of how the match ended from the two managers.

Brighton boss Micky Adams claims to have called an end to the match citing the 'safety of his players', according to the Irish Examiner.

But Longford boss Stephen Kenny had a different ourlook.

"We were outplaying them and they couldn't handle that," Longford boss Kenny told the Irish Times after the game.

Micky Adams became agitated on the bench and that filtered through to his players.

There were a lot of late challenges and unnecessary stuff. The referee didn't abandon the match, they walked off the pitch.

That type of thing doesn't happen in football in Ireland. I don't understand why it happened. It hasn't happened before and is unlikely to happen again.

I didn't feel any of my players did anything wrong bar standing their ground. We won the Fair Play Award last season and hadn't a player sent-off in 18 months.

Kenny's sentiments were echoed by Longford's chairman at the time, Adrian Duncan.

"To blame his actions on the safety of his players is a joke," Duncan said. "We are very annoyed because they were to blame.

"They were the ones coming in with late tackles. It was the most unfriendliest of friendlies." 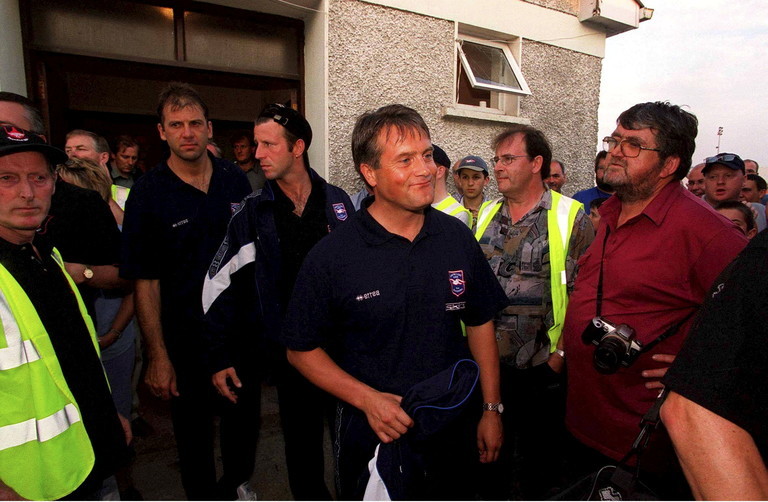 Brighton were [then] due to play Athlone Town in another friendly a day later, but they cancelled that fixture and returned home.

It was a game that stood Longford in good stead, oddly enough, for their Bulgarian tie in the UEFA Cup.

"We took a lot of confidence out of that game [against Brighton] for the Litex Lovech game because this was a big club that we were playing at the time," Byrne says.

"You have to react to any situation in a game, and yes, it was fiery and tackles were flying, but you have to stand up to that and we did at the time.

"It actually ended up giving us confidence for that Litex Lovech game because we were able to stand up to a good English side."

Unfortunately, they could not get past their highly-fancied opposition on that occasion, despite going mightily close.

As for Brighton, they would end up winning promotion to the old First Division that season, albeit not with Micky Adams.

Adams left his role at the club two months after the self-proclaimed 'Battle of Longford' to take up a position as an assistant to then Leicester boss Dave Bassett.

Adams would find himself back in Longford in 2015, funnily enough, when he was manager of Sligo Rovers.

And he even got to defend his actions in that 2001 game while in charge of the Bit O'Red.

"There was a bit of an altercation before half-time and we decided not to continue the game," he told Newstalk.

That's one way to describe it.

SEE ALSO: 21 Under 21 - The Best League Of Ireland Players Under 21 Years Of Age 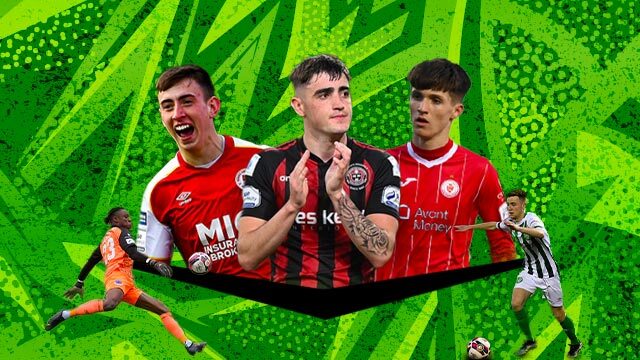 Football
7 months ago
By Jonathan Byrne
Duffy's Redemption Complete As Potter Won't Replace £50 Million White
Football
8 months ago
By Andrew Dempsey
A Debut At 14 To Brighton's First Team At 16, The Rising Star Of Evan Ferguson
Football
8 months ago
By Gary Connaughton
After The Year From Hell, Shane Duffy Has Gotten His Mojo Back
Popular on Balls
Rugby
2 days ago
By Colman Stanley
'That Pace, That Intensity, That Organisation' All Black Legend Has High Praise For Leinster
GAA
2 days ago
By PJ Browne
Cusack Has Little Sympathy For Gearoid Hegarty After Red Card
Football
9 hours ago
By Colman Stanley
Wagatha Christie Trial Sheds New Light On England's Euro 2016 Disaster
GAA
15 hours ago
By PJ Browne
GAA President Explains Why Tailteann Cup Won't Be All-Ireland Curtain Raiser