While Social media is a great tool for bringing fans and stars together with contact and insight into their idol's person lives, it can also lead to them embarrassing themselves to a very public audience of millions, just like this.

The England striker intended to reply to abuse he received from a Liverpool fan. But instead of directing the threatening twitter reply to the fan, he sent it to himself instead.

@WayneRooney I'll put u asleep within 10 seconds u little girl. Don't say stuff and not follow up on it. I'll be waiting

The Tottenham Hotspur defender tweeted this allegedly referring to a game of bowling he played with his Belgium teammates. Since then it's been retweeted nearly 50,000 times, mostly by rival fans after an underwhelming Spurs performance.

The three-time Ballon D'Or winner needs to be more careful with the wording of his tweets, CR7 later deleted a tweet about his boy's underwear competition after a mistake led to some unsettling connotations.

Twitter was relatively new when Darren Bent attempted to force his departure from Spurs to Sunderland in 2009. Bent did make the move to Wearside, but the rant accusing Tottenham chairman Daniel Levy on stalling his transfer also brought him a £120,000 fine.

The Derby wonderkid was truly put in his place after he voiced his opinion on musician Jake Bugg back in 2012. The best part was it was Bugg himself who put him there.

Luckily there's no photographic evidence of the Swansea City midfielders explicit tweet when he was at Liverpool back in 2011. Jonjo's ball control let him down after he managed to tweet a picture of his Johnson (not Glen) over a urinal to his thousands of followers. He alleged the photo was a prank by his friends, which if true, certainly made a splash.

No list is complete without Joey Barton and this one certainly came back to bite him on arse. The controversial midfielder Tweeted this in 2013 before QPR returned to the Premier League.

I'd destroy both the midfielders Spurs have wasted money on and I'm a championship player. Albeit, an exceptional one... — Joseph Barton (@Joey7Barton) November 24, 2013

His next trip to White Hart Lane came two weeks into the following season, Barton only made four successful tackles as QPR lost 4-0 to Spurs.

Rio is also prone to a big FA fine for his use of Twitter. He received a £45,000 charge for retweeting that Ashley Cole was a "choc-ice". He also complained about the postponement of Manchester United's match against Chelsea amid icey conditions in 2010.

Did any1 see the ipswich game yesterday??? Pitch covered in SNOW....so how was that game played and ours is postponed??

Safety for fans travelling to the game is the general feedback….I get it tweeps!

Another former QPR midfielder suffers long-term from something they tweeted. Henry also proves that it's not just football related when a player makes a fool of themselves as he pledged his support to the Conservative's in the Election, before his political opinion came back to him after suffering relegation from the Premier League. 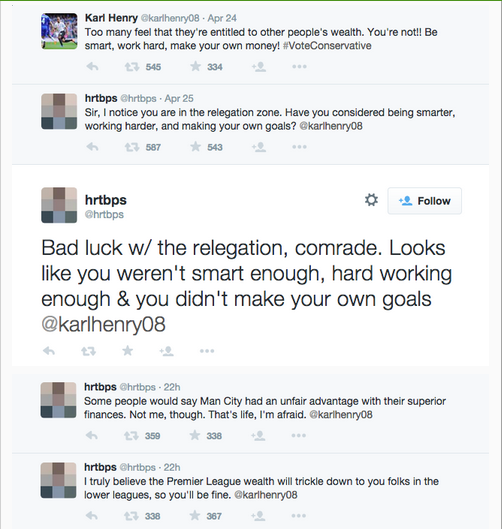 The Dutch winger is a serial twitter offender and also once tweeted a photo-shopped picture of Howard Webb in a Manchester United after Liverpool lost to The Red Devils in a game Webb refereed.

However it's this Tweet about Rafa Benitez that earned him a one-way ticket out of Anfield.

Disappointing news. The boss left me out the squad. No explanation,' then said: 'What happened after a first good season? Scoring 10 goals, being young talent of the year, and then second and this season don't play at all?

At this point the former Arsenal midfielder is arguably more famous for his Twitter than his football career. The attention that came with threatening a rival fan and his use of an anti-Semitic term in the process can help explain why. Frimpong was fined £6,000 for the comment.

Frimpong calling a Spurs fan "YID SCUM" is this acceptable? Let's see how many times it's RT'd #COYS Via @Anthoulla1 pic.twitter.com/sFnaBmsn

Unfortunately despite his best intentions things didn't work out for Frimpong at Arsenal, he now plays his football in Russia with FC UFA.

I will never leave Arsenal even if I get released I will beg on both knees to stay they gna have to escort me.#DEEEEEENCH