With the season approaching its end, and with many of the prizes already decided, we are very much in team of the season territory.

The PFA Team of the Year will be announced shortly, and while it is likely to be dominated by Liverpool players, one or two Irish lads have a shout of making the cut.

We hope they do, but we have put together our own Irish Team of the Season just in case.

We asked our readers on Twitter to vote for their Irish team of the season, picking the best XI based on club and international performances over the current campaign. You voted in your thousands, picking a very strong team.

While many of the players who made the cut were predictable, it has thrown up a couple of surprises. Here's the best Irish XI of the 19/20 season, as chosen by you.

Randolph was a shoe-in for the goalkeeper position, despite barely featuring over the second half of the campaign.

Still, it is difficult to overstate just how good he was for Middlesbrough in the first half of the season. Even accounting for the fact that he played on a team fighting relegation he still put in a number of incredible performances, enough to convince West Ham to but him in January.

While the debate of Doherty versus Coleman continues to rage on in the international team, there was only ever going to be one winner here.

Amassing 81.9% of the four-man vote for this position, the Wolves player was the runaway winner. It's not hard to see why.

Doherty has continued his brilliant form from the 2018/19 campaign, notching seven goals and five assists in all competitions this season. He is without doubt amongst the best attacking fullbacks in the Premier League.

Matt Doherty breaks the dead lock here for Wolves in Armenia, he's picked up from where he left off last season! 🔥

A slightly controversial one here considering Shane Duffy's struggle for playing time at Brighton this season. After being a standout in the team under Chris Hughton, the centre back only managed to make 13 starts in the Premier League this season.

That was enough to get him into this team, with his contributions in an Ireland jersey no doubt a major reason why.

He seemed to indicate recently that his spell at Brighton was coming to an end, so it will be an interesting few months ahead for the Derry man.

This was about as close to cert as you were going get in this team.

John Egan has enjoyed a remarkable debut season in the Premier League. Anchoring the defence for a brilliant Sheffield United team, he has been one of the standout centre backs in the division.

He has been in stunning form all season, missing only two league games. He has even managed to grab a couple of goals in recent weeks, ending up with 93.7% of the vote for this position.

Ryan Manning has had a brilliant season in the Championship with QPR, but there was only going to be one winner for the left back position.

How about 90 seconds of Enda Stevens scorching people?

Enda Stevens has carried over the form he displayed in the Championship last season, immediately establishing himself as one of the most reliable left backs in the Premier League. He has scored four goals and grabbed two assists, appearing in all 37 league gams for Sheffield United.

A brilliant season for a player who has had a remarkable journey in football.

Callum Robinson was a mainstay in the Sheffield United team at the start of the season (scoring one goal), but he started to find himself on the bench more often as we entered the festive period.

He moved to West Brom on loan in the search of regular football in January, a move which has worked out well for all involved. He played a key role in the club's promotion to the Premier League, scoring three goals in the process.

That move could be made permanent in the coming weeks.

On loan from Brighton this season, Jayson Molumby enjoyed a very productive season in the Championship. Having initially struggled to break into the starting XI early in the season, he never really looked back after getting a place in the side in September.

He finished the campaign with 37 league appearances, netting his only goal of the campaign last weekend.  Brighton may opt to keep him for the upcoming campaign, but there will be no shortage of teams looking to sign him on loan if he is available.

An Ireland call-up looks certain at this stage, and the fact that he beat out a resurgent James McCarthy for this spot tells you all you need to know.

Hourihane has experienced a bit of a mixed campaign at Aston Villa, but he has been irresistible at times.

In and out of the starting line-up for much of the season, they have leaned heavily on the Cork man in recent weeks. That has coincided with a serious uptick in Villa's form, with Hourihane amongst their best performers.

It's that man again - what a delivery from Conor Hourihane for Villa's second! 🤤🔥

They now have a real chance of avoiding relegation this season. Hopefully the midfielder will be given a good run in the team to start next season if they do so.

James McClean struggled mightily early in the campaign, as did the rest of the Stoke City squad. However, his form improved greatly after the appointment of Michael O'Neill.

He played a major part as the club eventually easily avoided relegation in recent weeks. McClean ended the season with a tally of seven goals and nine assists in the championship, an excellent tally for a winger.

The goals weren't there for much of the season, but David McGoldrick remained a key cog in the Sheffield United team. That speaks volumes about his value, especially with a manager in Chris Wilder who demands the very best from his players at all time.

So much of what he brings can't be quantified in traditional stats. Still, it was no doubt a massive relief to see him bag a brace against Chelsea.

Having recently signed an extension to his contract, we can expect to see plenty more of him in the Premier League in the future.

Aaron Connolly's season didn't quite take off in the way many would have hoped after his two goal masterclass against Spurs in October, but the Galway native still enjoyed a thoroughly impressive campaign.

He found himself out of the Brighton side for a time, but has been very impressive since the season resumed. Connolly offers so much to the team with his ability to stretch opposition defences.

The forward should continue to develop under Graham Potter next season, with a larger role in Stephen Kenny's Ireland setup also seeming likely. 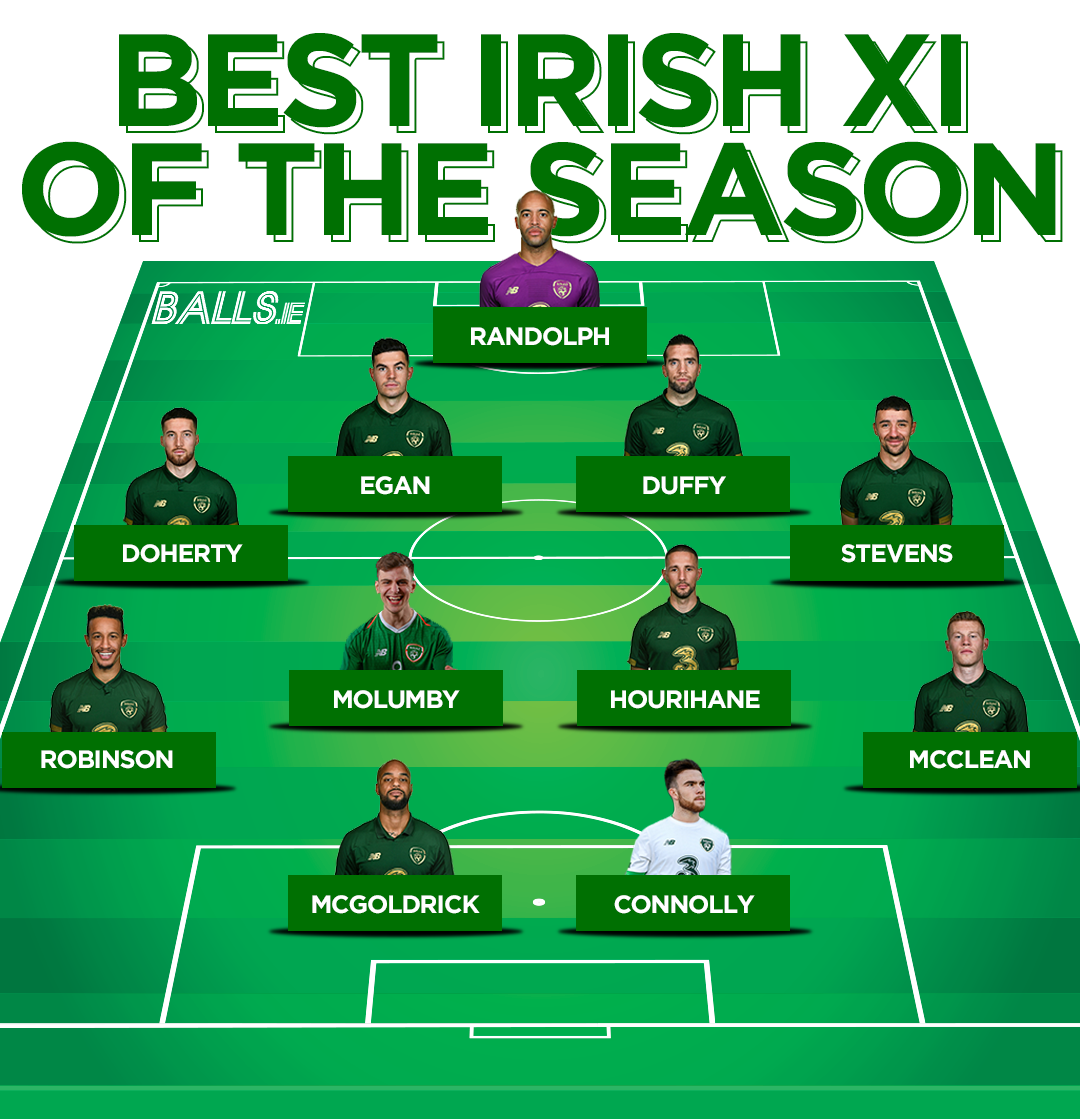