The Depressing Stat That Captures The Extent Of Ireland's Goalscoring Woes

For a country with strong Europhile tendencies, and a love of European institutions like Eurovision, Ireland has not embraced UEFA's Nations League format. Ireland endured another goalless 90 minutes in defeat in Helsinki last night, and find themselves in third place in League B Group 4. Ireland have reaped two draws, two losses and a single Shane Duffy goal from a testing campaign.

It's worth reminding ourselves that Ireland's goalscoring woes did not start back in April when Stephen Kenny took over. This has been a massive problem for successive Ireland managers. Ireland were just as bad in front of goal in the first iteration of this tournament in 2018, which brought the curtain down on the O'Neill-Keane era. Ireland finished third in a group of three, with two points and a single goal by Shaun Williams against Wales to show for it.

That's two Irish goals in eight fixtures in the history of the Nations League, one by a defensive midfielder, the other by a centre back.

We saw this stat in the Balls.ie Irish Supporters Group via Sky Sports last night and thought it properly illuminated Ireland's goalscoring woes. Of the 55 UEFA nations, 53 have scored more goals than Ireland across the two iterations of the competition. Only San Marino, who are still waiting for their first-ever goal in this competition are beneath us.

That means the likes of Andorra, Gibraltar, Liechtenstein and Malta all have more goals in the history of the competition than Ireland (although Europe's minnows did play two more games than Ireland in 2018). Like Ireland, the likes of Iceland and Albania finished the 2018 competition with just one goal but both managed to add a few more to their tally this autumn.

The philosophy has changed but the end result hasn't (we've yet to mention things were hardly better under Mick McCarthy in Euro 2020 qualifying, when Ireland managed 5 goals from 8 games). Ireland haven't scored a goal in 390 minutes of international football now. The Nations League may be nothing more than a selection of glorified friendlies but they have highlighted the greatest flaw in the Irish football team. 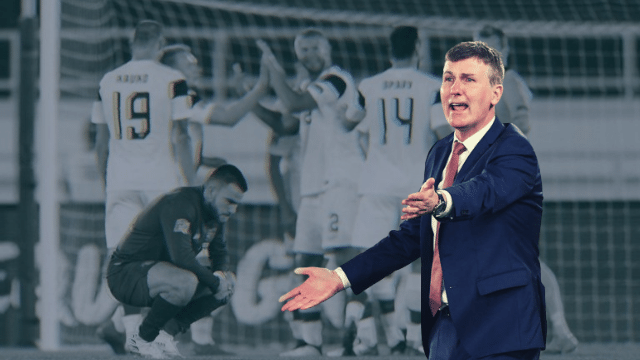 Football
1 month ago
By Colman Stanley
Stephen Kenny Defends Seamus Coleman After Carragher Criticism
Football
1 month ago
By Gary Connaughton
Stephen Kenny Names Experimental Ireland Team To Take On Lithuania
Football
1 month ago
By Gary Connaughton
Stephen Kenny Sums Up How Key John Egan Is To Ireland's Style Of Play
Popular on Balls
Rugby
1 day ago
By Colman Stanley
'I Think Munster Softened Them Up For Us': Sexton Not Carried Away After Clincial Leinster Win
GAA
2 days ago
By PJ Browne
Mayo's Padraig O'Hora Using Football To Promote His Real Passion
Rugby
16 hours ago
By Colman Stanley
'That Pace, That Intensity, That Organisation' All Black Legend Has High Praise For Leinster
The Rewind
1 day ago
By Eoin Harrington
Watch: Brilliant Dermot Morgan Dublin Segment From 'The Travel Show' Resurfaces