The abstract vehicle the Irish sports fan most commonly uses to communicate support is bandwagon. Yet there is another vehicle we use to voice our great passion for sport: outrage. This is not a simple type of anger. This is an outrage of little pith and perspective, less about magnanimity and more about mypopia.  Let's face it, we've all seen plenty of it!

Here are some other instances when our reactions may have been slightly over the top.  (Note: Feel free to overreact in disagreeing with us.)

It feels like Roy Keane's entire career is one overreaction after another. In the lead-up to the 2002 World Cup, Fintan O'Toole was writing columns claiming Keane's ambition and refusal to settle for heroic failure was the very embodiment of the Celtic Tiger. Then came Saipan, the trigger for hysteria on a hitherto unseen scale and a highly successful musical. The greatest overreaction to Keane's career came in 2004 however, when he was preparing to return to the Irish fold under Brian Kerr. Keane's decision was a topic for debate on Prime Time.

Alan Hunter of the Irish Football Supporters Association was on the panel, and to say he was sceptical of Keane's potential return is an understatement. Hunter feared a repeat Saipan, which could psychologically scar the team and the reputation of the Best Supporters In The World, calling it an "extremely dangerous situation". The only possible resolution for Hunter would be for Roy Keane's possible return to the international team to join other talking points like divorce and membership of the EEC in going to the public and being decided by referendum.

Mayo have displayed a sad proclivity for narrowly losing All Ireland semi-finals in recent years. Perhaps the reason behind this is their eschewing of the cunning mind games favoured by Mickey Moran's 2006 vintage. Before their All Ireland semi-final against Dublin, Mayo decided to warm up in front of a Hill 16 swathed in the blue of Dublin.

This ghastly denigration of GAA tradition greatly irritated Dublin and their manager Paul 'Pillar' Caffrey. He initially approached the Mayo management team calmly, but broke into a jog before launching himself into the back of Mayo selector John Morrison. Caffrey then hilariously pushed a member of his management away from the scene as if to immediately absolve himself from blame. Sadly for Caffrey, the incident was captured by the RTE cameras for posterity, and the incident features seven minutes into the video below.

It is possible that Mayo were spurred on by Caffrey's overreaction to win a thrilling semi-final, although it may have had more to do with the brilliance of Ciaran McDonald.

Oh Warren, how could you?

The stage was set for Brian O'Driscoll's victorious farewell to the British and Irish Lions in 2013. Series defeats to Australia in 2001 and South Africa in 2009, either side of the injury-curbed whitewash against New Zealand of 2005 meant that O'Driscoll had yet to win a Lions tour.

A strong Lions squad of 2013, along with the fact that hosts Australia were not all that good, meant O'Driscoll had a glorious chance of signing off with a maiden tour win. Things were going to plan: O'Driscoll was selected by Gatland at 13 for the first two tests, with each side winning once.

As everything built towards the deciding test in Sydney, Warren Gatland had to go and ruin it all. Jonathan Davies would start at 13 , while O'Driscoll didn't even make the bench. Hysteria reigned. Eddie O'Sullivan said the decision "beggars belief" while Keith Wood said that "I'm upset for the Lions and I'm upset for Brian. Brian gets the Lions more than Warrren Gatland does, if I'm brutally honest". Balls.ie tested the mood of the nation on the subject, with Willie O'Dea finding it "particularly harsh".

Gatland did have the decency of calling it his toughest decision in management, but the Lions showed less respect for our anguished feelings by winning comfortably in O'Driscoll's absence. While O'Driscoll deserved a tour victory, there was something slightly disappointing about seeing him celebrate in a suit.

An obvious one. Following Thierry Henry's handball in the 2010 World Cup play-off, the Irish response was naturally one of extreme passion. The expected calls for a replay and the casting out of France from the tournament ensued. There were a couple of unique things about this outrage, however.

The first is that anger was not directed towards the man who committed the action. Instead, the Irish players blamed referee Martin Hansson for not spotting Henry's transgression, with Damien Duff saying that "You can't blame him. He's a clever player – but you expect the ref to see it, it was so blatant".

Robbie Keane targeted the highest figures in football: "They're all probably clapping hands, Platini sitting up there on the phone to Sepp Blatter, probably texting each other, delighted with the result". It was this choice of target that led to the second unique aspect of this overreaction: it manifested itself in administrative lobbying.

John Delaney went right to the top, and asked Sepp Blatter for Ireland to be given special dispensation be given a spot alongside France at the finals. This would make Ireland the 33rd team at the World Cup, which would be a logistical disaster and upset the symmetry of the competition. This reaction led to one of the most humiliating episodes in Irish sport: being laughed at by Sepp Blatter and a room of FIFA officials.

Denied dispensation, the FAI did at least get compensation: Delaney accepted a five million euro payment from Blatter.

Possibly the greatest overreaction of all came from one caller to Liveline, who suggested the nation should boycott Cuisine de France products in protest. Cusine de France is an Irish company.

Who Rory McIlroy Will Represent In The Olympics

The announcement that golf was to be an Olympic sport from 2016 was initially marvellous news. This country has an abundance of talented golfers: Clarke, Harrington, Lowry, McDowell and of course Rory McIlroy. Then we began fretting as McIlroy refused to confirm which country he would represent.

Following the announcement, he was non-committal as to whom he would represent, saying that the IOC rules allowed him to represent Great Britain if he wished. McIlroy then faced constant questions regarding who he would represent, and revealed he was weighing up a third option: "play for one side or the other - or not play at all because I may upset too many people… Those are my three options I'm considering very carefully".

McIlroy eventually finished considering the question in 2014, and confirmed he would represent Ireland, saying that "I knew I had to make some sort of decision - some kind of stand on it. I weighed up everything...but I kept thinking about all the times I played for Ireland. I won great amateur titles representing Ireland. I kept thinking, why change that? It is what I have always done. I see this as a continuation of what I have been doing".

And that was it, until he didn't go. And we were back at it.

Anytime A Commentator Refers To An Irish Sportsman As British

Look, they're not never not at it. But we always bite!

Some of the more nationalistic among us see these careless errors as a great affront to our national identity. The BBC have been serial offenders this year. Mark James referred to Ireland's Paul Dunne as British during the Open just a week after a BBC report called Conor McGregor the "first UFC champion from the United Kingdom and Republic of Ireland" following his victory against Chad Mendes.

Elsewhere, the Daily Telegraph were forced to tweet an apology for referring to Katie Taylor as British in a fight preview in 2012. Their mistake became the top trend on twitter for that day following an avalanche of corrections.

Such is the sensitivity of this issue, Estonia tried to use these tactics to unsettle us before the Euro 2012 play-off. They failed, although this is a saga that will likely never end. 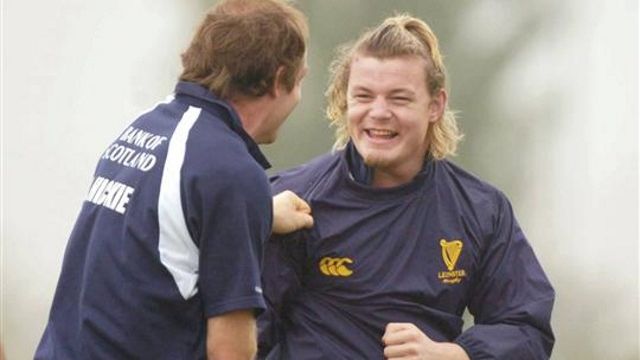 Podcasts
1 year ago
By Michael McCarthy
This Week In... 2004 - A Triple Crown At Last & The Maddest Champions League Of All
Football
3 years ago
By Maurice Brosnan
Rugby World Reacts As France Named 2023 World Cup Host
Football
4 years ago
By Balls Team
Some Men Have Really Nice Legs Too
Popular on Balls
Football
9 hours ago
By Gary Connaughton
Watch: Ireland's Ademipo Odubeko Scores Stunning Hat-Trick For West Ham U23s