We have all been guilty of hastily sending a tweet, text message or even a fax that contains some errors, misspellings and poor punctuation, heck, this article is probably proof enough that I'm a card carrying member of this group. But enough about me, more about Sepp, Joseph S to his friends and Jesus did this man have plenty of them down the years.
Sepp has just taken to the social network that is Twitter, fair play Sepp, and in doing so he has tried to put our collective minds at ease, because he's good like that, like a elderly neighbour who would mow your lawn when you are on that two week holiday in Kerry, the time it did nothing but rain.

Sepp has chosen today to show that he cares, that Fifa is still in his heart of gold (not real gold, that would be ridiculous). But the picture that is attached to the tweet is what really interest us here, Sepp is no n00b and he know there is significantly more interaction on Twitter if you attach an image, that Wiley Coyote.

Let's first deal with the text - 'Working hard on reforms after meeting Audit & Compliance Committee Independent Chairman Scala' - this is such a precise use of all the 180 characters that Twitter will allow that it means there must have been consistent writing and re-writing of this tweet before Mr Ampersand landed into the room like the curvy flirt he is, saving the day like Jack Warner used to. 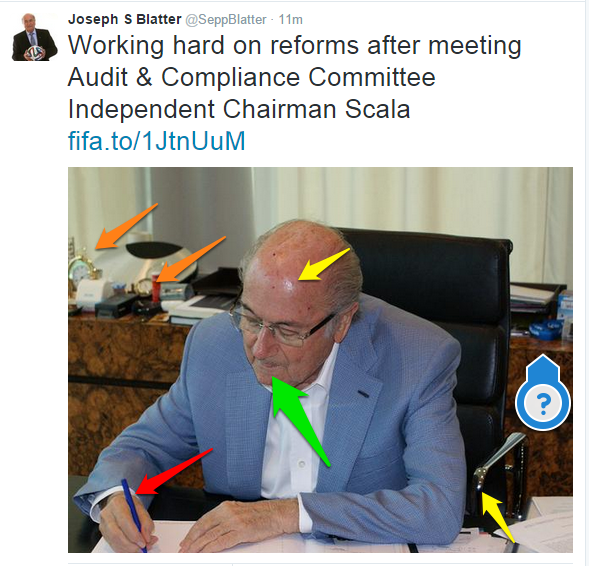 Now the images itself, let's deal with the orange arrows, the colour code is of no real significance here fyi. Here we have Sepp sitting hard at work in front of a very messy cabinet/dresser, with what appears to be not one but TWO GOLD TIMEPIECES. That's some balls out shit from Sepp. While one of the pieces of shiny clockmanship seems to be a retirement clock of sorts, the other takes the appearance of a bloody expensive wristwatch that is positioned with its best profile showing. Watches are cool at Fifa, no real drama or negative connotation here then.

Next we have the green arrow, aimed at the mouth of JSB, here we have identified the well worn Rom-Com trick that signifies a playful concentration, something you'd more likely expect from Natalie Portman or Keira Knightley, but Sepp pulls it off, telling us he is taking this all very seriously.

Up next is the red arrow, pointed towards a run of the mill biro, woah there Blatter, where's your golden Mont Blanc? where's the quill and the ink? surely you are better than this.. alas it's a crafty ploy to make him more us, less crazy man under investigation. And it works, so well.

Now, the yellow arrows, we have the evidence of flash photography, indicating the presence of an underling with a decent cameraphone at the very least, the photo is not in portrait mode which also points a decent level of experience in dealing with such important shots.

Finally, we have what appears to be a tub of Dax Wax, now this is puzzling, as we all know, this substance is for gelling and styling hair, as the tub says -' Dax short and neat - light hair dress' - this unfortunately raises more questions than answers and perhaps needs further investigation. That is something outside our remit here at Balls.ie, but hopefully we have shed some light on what is clearly a piece of PR genius that should be held as an example for all deposed leaders under investigation. Sepp we salute you.

Football
9 months ago
By Gary Connaughton
The Balls.ie Football Show Quiz: Which Player Was Rated Higher In FIFA 12?
1

Gaming
2 weeks ago
By Sean Meehan
Here Are The Best Wonderkids From Each FIFA Of The Last Decade
Football
9 months ago
By Gary Connaughton
The Balls.ie Football Show Quiz: Which Player Was Rated Higher In FIFA 12?
Football
1 year ago
By AFP
FIFA Pressures Iran To Allow Female Football Fans Back Into Stadiums
Popular on Balls
GAA
18 hours ago
By PJ Browne
Former Cork Footballer Kieran O'Connor Has Died Aged 41
21