If Jamie Vardy fails to score in his next game, then the record for goals scored in consecutive games in English football will still be held by an ex-IRA hunger striker who was banned from playing Gaelic football for togging out for Shamrock Rovers.

Now that Ruud Van Nistelrooy's Premier League record has been surpassed and those with short memories have been well and truly shamed for their propensity for only referring back as far as 1992, people are beginning to turn their attention towards Irish striker Jimmy Dunne.

His people's political proclivities were to cost him in his late teens when he was interned in the Curragh camps during the Civil War for the crime of harbouring alleged 'Republican sympathies'.

Whether he was an actual IRA member remains a matter of conjecture. Those, including Daniel McDonnell, who have investigated suggest that his brother was a more active member of the IRA and Jimmy was detained on the back of this association. On Off the Ball last week, McDonnell said that Dunne spent time on hunger strike during his internment.

In his recent tome 'Sport and Ireland: A History', Paul Rouse dispelled the idea that Irish republicans were uniformly GAA minded people who were hostile to soccer. While this may have been true in the case of Michael Collins, the period also threw up characters like Todd Andrews, an anti-Treatyite Republican who disdained the GAA and revered soccer.

And it was in the Curragh camps that Dune was first exposed to soccer. By the time of his release in 1923, he was good enough to be signed by Shamrock Rovers.

For this offence, he was banned from playing Gaelic football.

Thereafter, he was signed by New Brighton in English Third Division. New Brighton were a now defunct club based in Merseyside and are not to be confused with the high flying Championship team in the south of England for whom Richie Towell has just signed.

After a short but profitable spell (scoring wise) in the Third Division, Dunne was bought by Sheffield United. He made history at Bramall Lane.

Dunne scored in 12 consecutive games for Sheffield United during the 1931-32 season. It wasn't even his most prolific season. The previous season, he had 50 goals in all competitions, with 41 coming in the League.

His spectacular scoring exploits attracted the notice of the grand old man of English football management Herbert Chapman. The all-conquering manager of Arsenal, who was to die of pneumonia within a couple of months, snapped up Dunne.

Following his departure, Sheffield United, who had gotten used to upper-mid table finishes when Dunne was leading the line, were promptly relegated. Arsenal, meanwhile, won another First Division title in his first season with the club, though his haul of nine goals from 23 starts represented a drop-off in his usual scoring rate.

Arsenal's success continued under Ted Drake but the new manager had little time for Dunne and he played fitfully in his final two seasons at the club. He was offloaded to Southampton, then mired in the Second Division, in the summer of 1936. His scoring rate picked up again and he was adored by the Southampton crowd. 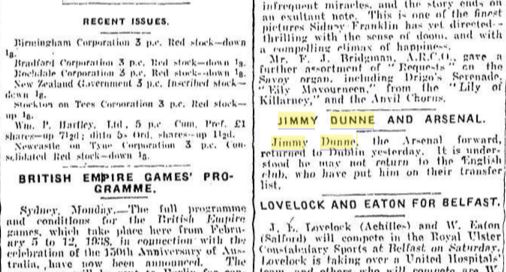 He returned to Shamrock Rovers where he played out the twilight of his career, winning consecutive League titles in 1938 and 1939.

Like many other Irish players of the era, Dunne played for both the Free State and the Northern team. He hit 13 goals for the FAI team in just fifteen games. For the North, his record was hardly any worse. He scored four times in seven matches.

Read more: Here's The Last Irish Soccer International From Every County In The Country

One of the most famous events in his Irish career occurred at a friendly with Germany in Bremen in 1939. Adolf Hitler was in power in Germany and it was considered frightful bad manners to eschew giving a Nazi salute before the match.

The Irish blazers were very anxious that the team not offend their hosts. Dunne was a socialist with Republican leanings and was reluctant to give the salute. There are conflicting accounts over what transpired. Allegedly, Dunne refused to give the salute and whispered down the line to his teammates, most of whom had sheepishly raised their arms, 'Remember 1916, remember Aughrim!'

He died unexpectedly at his home in Tritonville Road in Sandymount in November 1949. He was only 44 and still Shamrock Rovers manager at the time of his death.

Football
6 days ago
By Paul Moore
Quiz: How Well Do You Know the Jack Charlton Golden Era?
Previous Next