If you were to base the upcoming World Cup qualifiers on Ireland's first half display versus Oman last night, it wouldn't be a stretch to suggest we'll actually win the World Cup in 2018, and probably the following Euros as well.

A day removed from Robbie Keane's emotional farewell, however, and a trip to Belgrade next Monday arrives like a cold dose of reality. Another month or so without international football surely would have done no harm to the reparation of nerves which were so violently frayed this summer.

Nonetheless, Serbia await in World Cup Qualifying Group D. The Serbs enter the contest undefeated in their past four games under new manager Slavoljub Muslin - though the eastern Europeans have not played since a 1-1 draw with Russia back in June.

With Nemanja Matic and Aleksandar Kolarov absent through suspension for Ireland's opponents, here's the team we'd like to see Martin O'Neill start as we kick off our qualification campaign.

He might not play much football for West Ham this season, but Randolph was one of Ireland's stand-out performers in France, proving beyond doubt his reliability between the sticks. Even with Keiren Westwood waiting in the wings, there's no reason to change, particularly with Ireland likely fielding two relatively inexperienced centre-backs.

No-brainer in the absence of Séamus Coleman, who despite positive updates as to his fitness this week, is yet to play a minute's football this season. Christie provides enough going forward to trouble either Duško Tošić or Filip Mladenović on Ireland's right flank. 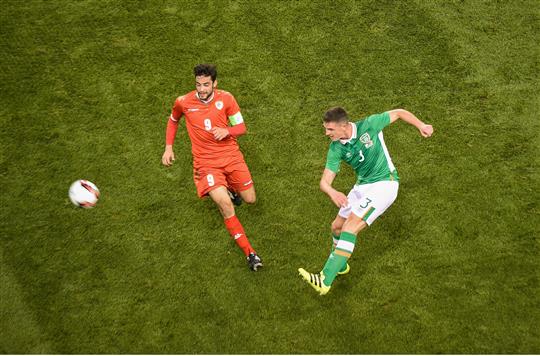 Wasn't tested on Wednesday night, but will have gotten plenty close to Serbia's lone striker in Aleksandar Mitrovic while training for his new club.

Slowly beginning to provide an aerial threat himself, but we'll frankly require his physicality to defend the likes of Ivanovic on set pieces.

Ireland's renaissance man. Having once cut a maligned figure in the Ireland team, it's been refreshing to see Ward play with such confidence since an impressive outing versus Germany last October. Beware, Zoran Tosic.

We say right-midfield but Big Jon will likely be pushed up just off of the front man, where he's been most effective for Ireland - not least during his two-goal showing on Wednesday night at the Aviva. With rumours rife in June that he was set to call it quits on his intenrational career, it will come as a relief to Martin O'Neill that the Liverpool-born forward has already gone balls-in on the new campaign, leaving the field in typically head-bandaged fashion following the recent 4-0 victory over Oman.

With James McCarthy set to undergo surgery for a groin injury, Glenn will need to put Belgium behind him and step up to the mark as he did so regularly during Euros qualification. Harry Arter is a viable option off the bench, but he doesn't offer enough of a presence to anchor a relatively attack-minded midfield.

A club record-breaking transfer to Burnley and first foray into the Premier League is no less than Hendrick deserved after an exceptional season for both Derby and Ireland. The Dub's tail is well and truly up. With Serbia missing Matic, he could well rule the roost.

Kenny Cunningham and Richie Sadlier called for Lionel Wessi's exclusion for James McClean on RTÉ last night, but I disagree. The notion that the Serbs are 'a big, physical team' is a tired cliché and a simple misconception, as is the idea that a diminutive playmaker such as Weso - whose best attribute, to my mind at least, is his positional instinct - would struggle versus imposing holding midfielders. Set the man free. Let him peacock.

We did of course cope exceptionally well in possession without him during the first half vs France, but a fit Wes simply possesses too much ability to be left out of an Ireland team, particularly versus a side which tends to play five at the back without possession. Without Wes, we'll struggle to break Serbia down. If he gets an hour, Ireland will score. Then bring on the in-form McClean as legs begin to wobble. 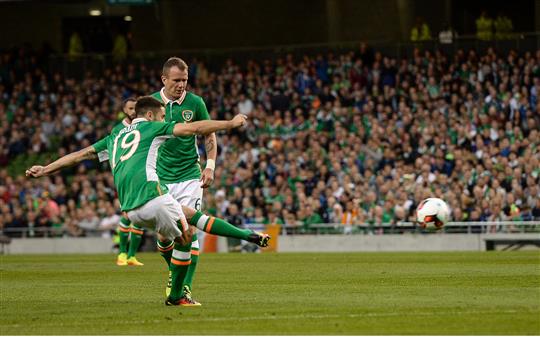 It's a disgrace that Brady isn't playing for at least Juventus after the transfer window. The man could open a tin of beans with his left peg. And yes, he can do it from left-back, but playing him further up the park just cuts out half the work.

Not quite on fire for the Saints this season, and quiet vs Oman (while conspicuously conserving energy). His inclusion must surely be a dead-cert, however, given his ability to put the heebee-jeebies into defenders and send them for chips if he gets half a sniff. His ability to stretch defences, too, frees up space for Wesley Hoolahan behind him. With the form Robbie Brady is in on Ireland's left-hand side, Monday could well be the night for a Long-overdue, towering header.