Today's guest column comes to us courtesy of Foxrock native Francis Revisionist. A veteran of the Irish Times letters page, Francis became aware of a number of videos on our Euros facebook group (there are a large number of videos posted there) and felt compelled to write to us. He has a highly provocative interpretation of events in Paris.

We do not endorse the views of Francis Revisionist.

When are we going to grow up?

We are not yet a full week into the tournament and - being the immature, non-grown up nation that we are - we have already seen the sickening proliferation of grainy looking videos of Irish fans indulging in ostentatious good deeds in France.

The media, in search of cheap hits, are primarily responsible for pushing this nauseating spectacle. Worse still, they are missing the sinister forces that are driving the Irish desire to behave well on the continent.

Even level-headed outsiders, and those not cursed with the 'green disease', have been commending the Irish fans for their activities in Paris and Bordeaux and elsewhere.

But they fail to see the Irish fans' supposed 'good behaviour' for what it really is.

For what is really motivating the Irish supporters good behaviour is none other than our old friend - anti-Englishness.

The ostentatious show of 'friendliness' is really a passive-aggressive mask behind which lies a desire to do harm to England and the English reputation.

This rank and wholly transparent Anglophobia shames the Irish nation. 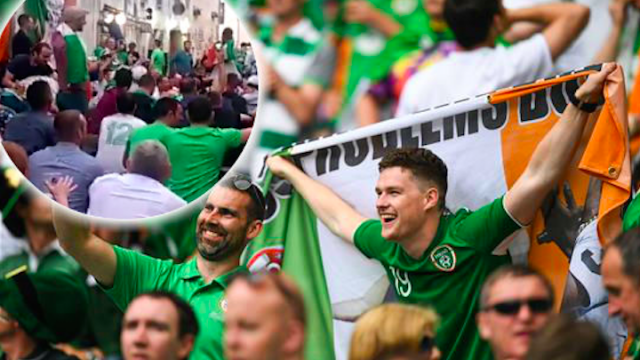 As ever, the Easter Rising is to blame for this. It was perhaps understandable given the recent centenary, which was nothing more than a glorification of a terrorist event.

As a result, the tired old mantra remains in place. England's difficulty down in Marseilles was Ireland's opportunity to flaunt their 'moral superiority' in Paris.

The subtext is so obvious.

Scenes like those we witnessed yesterday - in which Irish fans cleaned up all their rubbish in Bordeaux - are, in reality, a conscious effort to undermine the reputation of England, by deliberately juxtaposing their rioting behaviour with our alleged geniality.

Like Sinn Féin-IRA's electoral strategy, it is simply war by another means. They haven't gone away you know.

I had so wished we would have gotten past all this by now. Ireland has a long way to go to catch up with our neighbours.

If we truly were the pluralist and mature nation that we aspire to be, then we would not be out cleaning the streets of Bordeaux but we would instead be standing shoulder to shoulder with our English cousins lobbing chairs and throwing punches at the Russian enemy and getting tear gassed by the police.

One prays that if we ever qualify for another tournament we will have matured sufficiently to adjust our behaviour.

On top of this, not only has the media failed to call the Irish fans on their subtle and damaging Anglophobic antics, but they have also failed to bring up the appalling visual pollution to Paris in the shape of GAA jerseys. The unsightly rags are blighting the beautiful streetscapes of the French capital.

Francis Revisionist is a long time contributor to debates on Anglo-Irish matters. He is a member of 'Ireland Friends of Israel'.

Read more: If Euro 2016 Was A House Party, What Type Of Guest Would Each Country Be?

Football
11 months ago
By Eoin Harrington
Five Years On, Robbie Brady's Goal In Lille Stands Alone In Irish Football History
Football
1 year ago
By Balls Team
Watch: Bask In The Commentary From Around The World For That Brady Goal
Football
1 year ago
By Gary Reilly
Watch: Robbie Brady's Post-Match Interview Is The Most Beautiful Thing We've Ever Seen
Popular on Balls
Motorsport
1 day ago
By Eoin Harrington
F1: New Team Radio Clips Show Sergio Perez Frustration With Team Orders In Barcelona
GAA
3 days ago
By PJ Browne
Controversy In All-Ireland U20 Hurling Final Over Dubious Crucial Point
GAA
3 days ago
By PJ Browne
Mullane Says Cahill Won't Like Waterford Dressing Room Leaks
Football
3 days ago
By PJ Browne
McGeady Story Shows How Much Strachan 'Didn't Like Him' At Celtic