The Irish Player Ratings From One Portuguese Paper Were Pretty Interesting

As Stephen Kenny and Ireland look ahead to a pivotal game tomorrow at the Aviva against Azerbaijan, there's still an interesting post-mortem being conducted on the Portugal loss.

While Ireland still struggle to score goals, it was a largely positive performance from young Adam Idah. Aaron Connolly put in a tonne of work but missed a lot of chances, as he tends to do. We're still shocked Ireland weren't awarded a penalty for a 60th minute tackle on Connolly by Palhinha. Ireland's forwards put in a serious shift even if they didn't get the goals to show for it.

Yesterday, Tom Kundert of Portugol tweeted the player ratings from Portuguese sports daily A Bola. You might have seen our original player ratings --- well, it's always interesting to see how another nation sees us.

Of most interest, A Bola highlighted Aaron Connolly as Ireland's standout player, giving him a seven.

Player ratings in today's @abolapt a bit erratic to say the least. Haven't watched the game back on TV and sometimes miss things when in the stadium but Bruno 6, Guerreiro 4? Ronaldo 10? And worst of the lot Ireland's Idah 5!? He was superb in second half especially. pic.twitter.com/9aQ7tci1Cv

Meanwhile Idah was harshly awarded a five, the same score that James McClean earned in his cameo.

We gave Idah an 8 and described his performance like this:

Idah looked to get in behind when given the opportunity, while also linking the play brilliantly when deciding to drop short. His layoffs were fantastic throughout.

The Cork native also did his fair share or work at the other end, especially from set-pieces.

For what it's worth Connolly also earned a 7 from us.

A Bola were also high on the performances of Egan, Omababidele and Buzunu as well, who were all given sevens.

For a flavour of the Portuguese ratings, Ronaldo not surprisingly was awarded a ten, while the anonymous Bruno Fernandes managed to escape with a six. 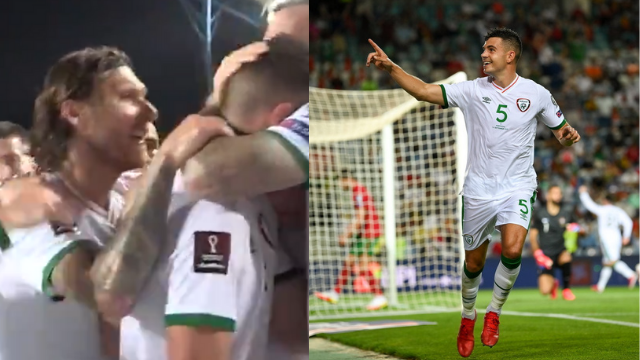