The Outrageous Talent Of Katie McCabe, And How North London Nurtured It

Ireland captain Katie McCabe will lead the Ireland women's team out for one of their most important matches in years tonight in Helsinki. Coach Vera Pauw called it 'the game' for Ireland in terms of their 2023 World Cup qualifying ambitions. Ireland will likely compete with Finland for second in the group and a playoff spot to determine whether they qualify for Australia and New Zealand 2023. A draw against the Finns is the minimum requirement for this fixture.

Ireland will take confidence knowing that it will have the most talented player on the pitch among its ranks.

Kilnamanagh's Katie McCabe continues to go from strength to strength for club and country. In fact, she might be in the best form of her glittering career.

Witness her impudent nutmeg on Sweden’s Sofia Jakobsson last week as an illustration of her confidence.

McCabe notched a league-best 11 assists for the Gunners last season, which is all the more noteworthy since they all came from left-back.

Her goals are rarely ordinary either; just take these efforts this month against Aston Villa and Everton, both of which are vying for the October WSL Goal of the Month award.

Which goal from @Katie_McCabe11 is your favourite? 💥#BarclaysFAWSL @ArsenalWFC pic.twitter.com/dgTbyb5RTB

The 26-year-old can play equally effectively as either a left-back or a left-winger and frequently does both for club and country. Katie already has three goals and three assists in five WSL appearances for Arsenal this season, continuing the form that saw her voted as the Arsenal supporters Player of the Season in 2020-21.

Her performances have delighted new Arsenal coach Jonas Eidevall, “What I like about Katie is that she can bring different things to the team depending on where you play her.”

The making of Katie McCabe

Her journey into professional football was inspired by her now friend, one-time mentor and her predecessor as Ireland captain Emma Byrne.

She describes seeing Byrne in goal for Arsenal during the 2010 Women’s FA Cup Final, the only women’s football match broadcast on television at that point, as a transformative moment and one that made her want to be a professional footballer. McCabe’s ascension in Irish youth football was swift and while playing for Shelbourne as a teenager she was considered Ireland’s premier young talent. 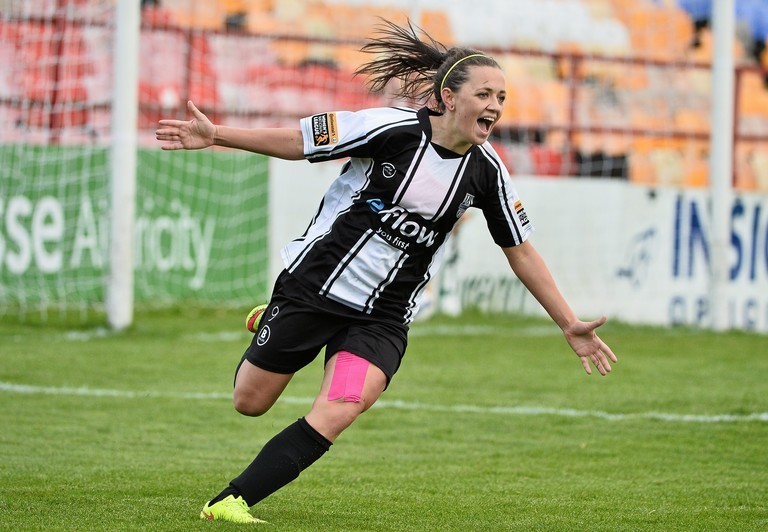 McCabe recalls Emma Byrne instructing her to keep her phone on during an international training camp back in 2015. Katie was taking part in a pre-match walk with her Shelbourne teammates in Mayo as they prepared to play Castlebar when an English number rang her. It was then Arsenal boss Pedro Losa. She signed for the club in the winter of 2015.

However, it wasn’t plain sailing for McCabe. She was accustomed to being the best player in Ireland. Now she was fighting for a spot with Arsenal and England legend Rachel Yankey. She took nothing for granted on arrival but began to find the lack of minutes difficult to cope with, even if she could count on the mentorship of Emma Byrne. (Emma picked her up from the airport on arrival in London and even took her on her first ‘big shop’).

Katie McCabe grew up with 10 siblings and had to adjust to a more independent life away from home. She says growing up in such a big family gave her a lot of self-confidence and more than a streak of chutzpah, which she says she needed at a huge club like Arsenal. In 2017, she was named captain of Ireland aged just 21 after the retirement of Emma Byrne. At club level however, Arsenal just wasn’t working out. Katie decided to spend time on loan at Glasgow City.

Her colleagues urged her to take a loan move in the WSL, which is more competitive than its Scottish equivalent, where Glasgow City have won the title for 14 consecutive seasons and counting. McCabe wanted to play for a dominant team again rather than a midtable WSL outfit so that she could get back in the swing of scoring goals, creating assists and, in her words, “reconnecting with my love of football.”

The loan spell was successful but McCabe still thought her Arsenal career was finished. That was until Australian coach Joe Montemurro took the reins from Pedro Losa at the conclusion of her time in Scotland. McCabe only had a few weeks left on her Gunners contract and planned to wait them out and find another club in January 2018. After a fortnight of training under Montemurro, the new Arsenal boss offered her a new contract and asked why on earth she had been loaned out in the first place. McCabe never looked back.

In 2018-19, Katie McCabe played more minutes than any other Arsenal player en route to the WSL title. She scored the most valuable goal of the season, a late piledriver in a 1-0 away win at Birmingham that put the team within six points of the crown.

Katie McCabe has developed into one of the Gunners’ most trusted lieutenants, “She is already the captain of her country …and I wouldn’t be at all surprised if one day she becomes the captain of Arsenal,” former Arsenal boss Joe Montemurro told me last season.

Katie McCabe is a leader away the pitch too. In June 2019 she revealed that she is in a long-term relationship with international teammate Ruesha Littlejohn. Katie had been out with her parents since she was 15 but her and Ruesha decided to go public with their relationship to inspire other young gay people. “We were thinking if we change one or two lives and people can come out and feel like they can talk about it then that’s our job done,” she said.

Arsenal is a club steeped in Irish tradition with club legends like Emma Byrne, Ciara Grant, Yvonne Tracey and Louise Quinn, a fact not lost on the Dublin native. “When I came over from Shelbourne I wanted to be one of those Irish Arsenal legends,” she told me last year. Katie is well on the path to becoming a legend for Arsenal and Ireland. 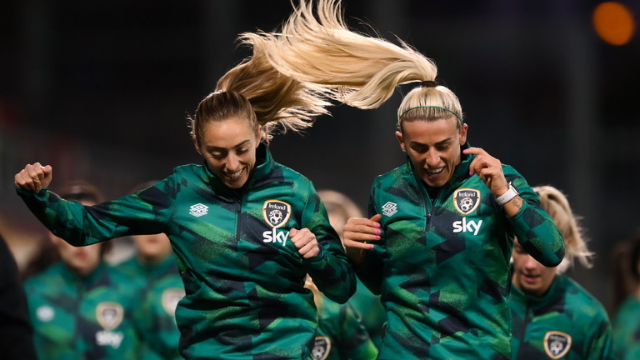 Football
1 hour ago
By Jonathan Byrne
Chelsea Boss Questions Timeframe Of Women's FA Cup Final
Football
1 day ago
By Eoin Harrington
Watch: Arsenal Score Bizarre Opener At Old Trafford With David De Gea Down Injured
Football
1 day ago
By Jonathan Browne
Manchester United Vs Arsenal: How To Watch And Match Details
Popular on Balls
Football
3 days ago
By Colman Stanley
Alex Ferguson Names His Greatest Captain, And It's Not His Most Successful Captain
Rugby
3 days ago
By PJ Browne
Trevor Brennan's Sons Played In The Same Top 14 Game At The Weekend
Football
1 day ago
By Gary Connaughton
Frank Lampard Reveals Ruthless Nature Of His Sacking At Chelsea
The Rewind
2 days ago
By Colman Stanley
New On Netflix Ireland: Your Guide To December's New Additions