Frank Lampard was dismissed as Chelsea manager twenty four hours ago, and the ructions continue across English football today.

For a Chelsea manager, Lampard enjoyed typical stint at the helm at Stamford Bridge that stretched to a season and a half. Yes, football is a cruel business, but as a Chelsea legend, Lampard would have taken the job with an intimate knowledge of the viper pit he'd be stepping into. He could have had no delusions about the need for results after the investment on Ziyech, Havertz and Werner.

Instead Chelsea spent nearly €300m to find themselves behind West Ham and Aston Villa on the Premier League table. The writing was on the wall.

But the extinguishing of Lamps's tenure as Chelsea gaffer seems to sting the UK press gang more than the dismissals of his foreign predecessors.

Henry Winter, chief football writer of the Times, captures both the reasonable disquiet, and the wild naivety, that has typified the English media's response to the sacking.

When the pandemic finally eases, and Chelsea fans are allowed back into Stamford Bridge, they will remind the board of their love for Frank Lampard. He's made mistakes, young managers do, but he cares deeply about #cfc. If only every player there shared his passion for the cause.

"I have the utmost respect for him." Roman Abramovich on Frank Lampard as he sacks him. #cfc https://t.co/DNSGTUIdTP

In a piece in today's Times, Winter went as far as likening Chelsea owner Roman Abramovich to 'the man who shot Bambi'.

‘Fans respect Abramovich for the billions he has poured into their club, and any debate about “what has Roman ever done for us” requires only a glimpse of the trophy cabinet, but the Russian will now be known as the man who shot Bambi.’

It's a bungled comparison, as it's Bambi's mother who is callously shot in Disney's famous exploration of cervine domestic life.

It's also wildly naive - and perhaps downright Bambian - to imagine that Chelsea supporters will harbour lasting resentment towards the Russian because of his dismissal of the club's former English captain.  Abramovich acquired Chelsea 18 years ago and supporters of the club would have long ago made their peace with the club's treatment of the people who brought it success.

The presumption that Lampard is some kind of innocent in the process is a bit much. He knew what he was getting into. He wasn't great at his job.

Of course, it's a cruel and absurd business, but one imagines even the most ardent Lampard acolyte would admit that - based on this season's evidence - the crazy job of managing Chelsea is beyond the club's all-time leading scorer, as it is beyond most humans. Lampard's rise was a beautiful fairy tale that English football press wanted to believe in, but like all fairy tales, it was too good to be true.

SEE ALSO: One Year On, Was Roy Keane Proven Right In Lampard/Solskjaer Debate? 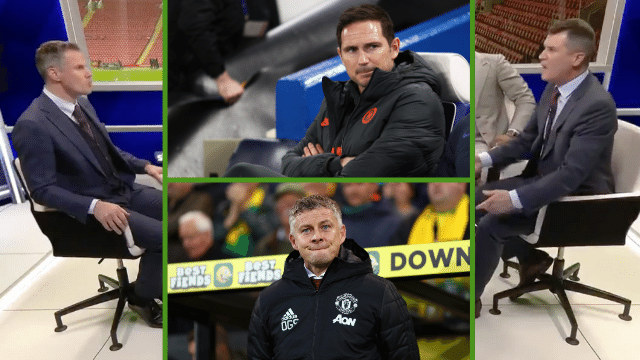 Football
15 hours ago
By Balls Team
Aston Villa 'Appalled' By Racist Abuse Of Ireland U19 Tyreik Wright
Football
16 hours ago
By Eoin Harrington
Something Very Exciting Is Happening In European Football All Of A Sudden
Football
2 days ago
By Gary Connaughton
Report: Jose Mourinho Open To Selling Matt Doherty This Summer
Previous Next

Football
15 hours ago
By Balls Team
Aston Villa 'Appalled' By Racist Abuse Of Ireland U19 Tyreik Wright
Football
16 hours ago
By Eoin Harrington
Something Very Exciting Is Happening In European Football All Of A Sudden
Football
2 days ago
By Gary Connaughton
Report: Jose Mourinho Open To Selling Matt Doherty This Summer
Popular on Balls
GAA
17 hours ago
By PJ Browne
'I Have Pictures Of Stephen Cluxton All Around My House, It’s A Bit Weird!'
Rugby
18 hours ago
By Balls Team
Son Of Offaly Hurling Legend Set For Super Rugby Debut
The Rewind
16 hours ago
By Sean Meehan
Introducing The Vote For Ireland's Greatest Singalong Song
Rugby
14 hours ago
By Eoin Harrington
Rob Kearney Player Mic Gives Great Insight On Western Force Debut