The Portuguese Media Reaction To The Stalemate Against Ireland

The nil-all result at the Aviva last night was a cause for continued optimism for Ireland supporters. For Portugal, a draw was all they realistically needed from Thursday's clash with Ireland. Manager Fernando Santos said as much post-match, admitting that it made no difference to him whether his team took a point or three home from Dublin.

The media reaction in Portugal to Ireland draw

Interestingly, Portugoal's match report suggested that Ireland were not the only ones who held grievances with the referee's performance. Ireland manager Stephen Kenny and man-of-the-match Callum Robinson both raised issue with the goal Ireland had disallowed late on, but the report from Portuguese football blog Portugoal suggested they were also unhappy:

Ronaldo took a knock early on and went down after a collision with Matt Doherty, but referee Jesús Gil was reluctant to blow his whistle and frequently allowed the game to continue.

Portugoal's Matthew Marshall went on to surmise that Portugal's display did little to inspire - though he did respect that Ireland had set up well - not just in the Aviva, but in the return fixture in Faro in September.

Fernando Santos' critics will be frothing at the mouth, but Republic of Ireland proved how difficult they can be to break down in the Algarve.

With Aviva Stadium sold out, Bernardo Silva injured, Nuno Mendes suspended and Santos starting with Rúben Dias, João Cancelo, Renato Sanches, João Félix and Diogo Jota on the bench, the stage was set for a tough game in Dublin and so it proved.

There is little use drawing conclusions from this match which goes down as one to forget.

In tweeting out the article, Marshall referred to the game as an "ugly" one, and that was a sentiment echoed by many Portuguese journalists.

Shane Duffy's performance at the heart of the Irish defence was undoubtedly worthy of praise, as he, Seamus Coleman and John Egan put the shackles on Cristiano Ronaldo up front. Major Portuguese marque O Jogo were not so impressed, however.

The instantly iconic image of Duffy grappling with Ronaldo in the air for the ball was tweeted by O Jogo with the caption "is this WWE"? on Friday morning. Their article on the incident went even further, likening Duffy's movements to a "chokeslam".

Fernando Santos fielded a much-changed team for the game in Dublin, in an attempt to avoid suspensions for the six players in his squad already on yellow cards. Pepe rather wrecked the whole plan when he got himself sent off in the dying stages but, according to O Jogo, Santos claimed in post-match interviews that Pepe is adamant Callum Robinson overreacted to his elbow.

Santos, to his credit, praised the Irish performance, particularly their ability to win the ball back. The Portugal coach said that the draw was a "very positive" result for his side, who he claimed could not deal with Ireland's physicality throughout.

No prizes for guessing what MaisFutebol thought of the game - the headline of their match report referred to the game as "chronic". They went on to say that the "best of the game" for Portugal was the draw, and criticised the Portuguese performance as subpar. 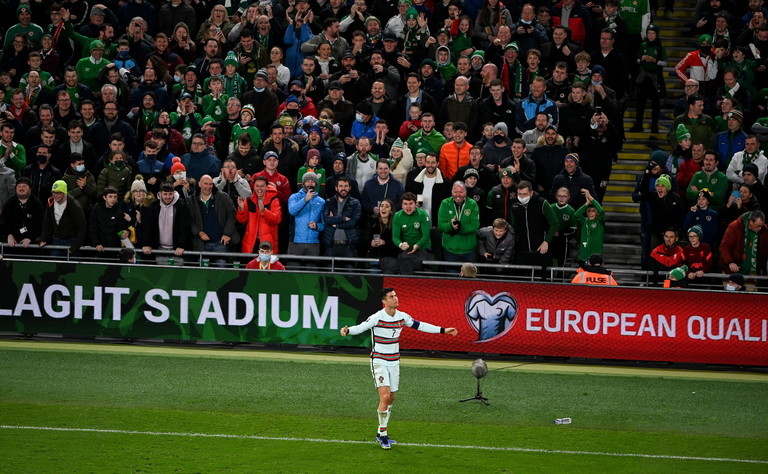 Perhaps of most interest from an Irish angle was the special praise afforded to the atmosphere in the Aviva Stadium on Thursday night. Ricardo Gouveia of MaisFutebol noted in his match report that the stadium was rocking at all moments. He said [in very roughly translated Portuguese]:

We started with the incredible atmosphere in the stands in Dublin, with Portuguese people among the huge green across the stands. The Republic of Ireland is already out of the race, but fans accepted any pretext to celebrate. A simple ball recovery, a good pass or a corner kick were celebrated as if they were a goal, transmitting enormous energy to the pitch.

Despite praising Portugal's opening to the game, Gouveia's report notes that it was Ireland who grew into the game and took control in the second half, with the "Seleção" struggling to trouble Gavin Bazunu in goal. Simply put, Gouveia says "nothing went well" for Santos' Portugal.

It was to social media that the Portuguese players flocked. Star man Cristiano Ronaldo was frustrated by the Irish defence, and praised the Aviva as a "difficult" place to play in his Instagram post after the final whistle, in which he urged his teammates to stay "strong" before shifting focus to Serbia on Sunday.

Andre Silva and Diogo Dalot also described the game as difficult in their post-match social posts, with Silva saying "with a lot of fight we managed to come out with a point." Bruno Fernandes and Goncalo Guedes both expressed disappointment with the result, but you get the sense Portugal are already lasered in on the visit of Serbia this weekend.

In the end, as Santos himself said, a point was all Portugal needed from the game with Ireland, and a point was what they needed. Attention now turns to Sunday's clash with Serbia, which will decide who qualifies automatically for next year's World Cup.

Portugal coach Fernando Santos: “Am I happy with the result? Naturally. In terms of our position, winning 5-0 or drawing here was the same thing. Of course I’d prefer to win 5-0, but it’s a positive result. Serbia has to play in our stadium to win. I’m convinced we'll qualify.”

Meanwhile, Stephen Kenny and Ireland turn to their game in Luxembourg on Sunday, with the hope of snatching third place in the group and avoiding a fourth-seed draw for the EURO 2024 qualifiers. They are sure to get some satisfaction and confidence out of having rattled one of the strongest teams in the world. 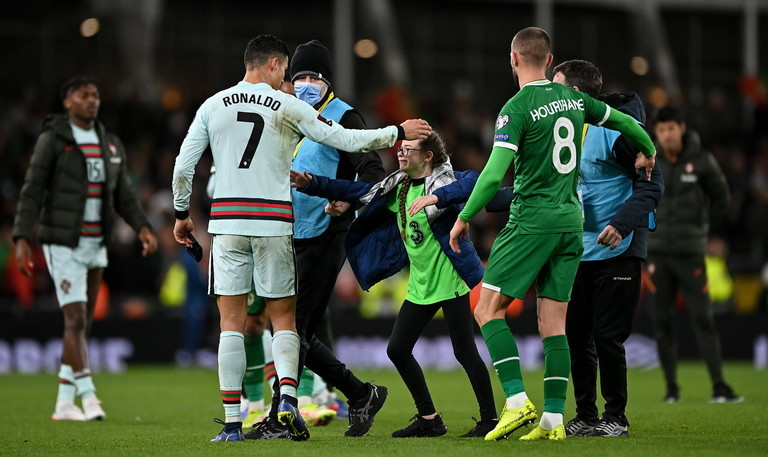